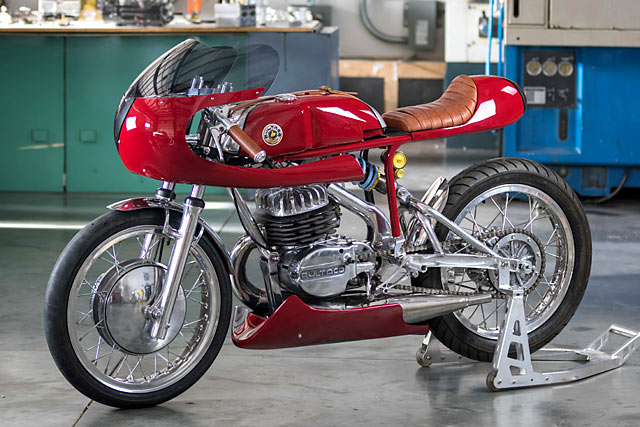 I have a strange affinity for old Spanish two strokes. As a kid, my dad raced trials on a Bultaco Sherpa T. There was something mystical and interestingly odd about them, with shifters and kick start levers all on the wrong sides. I ended up with my dad’s Sherpa at some point in my youth, and rode the piss out of it. Great memories even though my riding buddies were on mighty mono shock YZs and I had no prayer of keeping up when racing… until it got technical. My BMW Alpha bike was a massive undertaking and I needed to do something fun and light hearted with very little money. I love small displacement road race bikes. Super light, and nimble were the goals. I found a very rough Bultaco Alpina in a guy’s backyard although I only used the Engine and rear hub. The engine was locked solid so it came apart immediately. It just needed some love but was in good shape. I cut an O-ring groove in the case and primary cover so it didn’t leak. I couldn’t find a head that worked so I machined the one on it. The pipe is a bit of stainless sheet bashed about and welded up. I used an Ignatech ignition and a total loss rechargeable drill battery to power it. I designed this all as a solid model before I started cutting material. I made the frame out of aluminum with a machined rear motor mount that ties the top tube and the swingarm pivot into one piece. The swingarm mains are out of some 1×2 material I had laying around and I used Salt City Builds pipe bender to bend the tube braces. I had to fill the tube with buckshot and weld caps on the ends to keep them from collapsing. I met the Gears Racing guys at the Handbuilt Show earlier this spring and they were kind enough to figure out a shock that would work for this racer project. [superquote]“Tony Foal can explain why trail is important but sometimes I want to put my hand on the stove anyway.”[/superquote]

A Suzuki GS1100 drag bike I bought years ago donated its forks. The Bultaco TSS road race bikes used a leading axle fork so I thought these fit the TSS vintage look. With 22-degree head angle I have no trail so we may have passed nimble and gone into scary, but that is the fun in building and experimenting. Tony Foal can explain why trail is important but sometimes I want to put my hand on the stove anyway. I found a Moto Guzzi Eldorado front wheel on EBay that i liked because of the raised lip aluminum rim and big drum brake. I had to do a fair amount of machining to get it to fit in the narrower Suzuki forks but it came out great. Dave Tagg at Wright’s Motorcycles in SLC mounted and unmounted tires for me. I don’t remember where I got the rear tire but the front is an old one off my land speed Yamaha RD400. When I was at Barbers Motorsports Park museum I saw a Yamaha TZ that the racer insisted on 25-degree bar angles for. I always need to question why we do stuff we do; who declared 10 degrees the proper angle? So, I ran 25 degrees so I could find out why. The racer’s fairing and seat I bought, but the tank and fenders I beat out of aluminium sheet. I try to learn something new on every build, so the tank was my challenge on this one. I have a video series on You tube, under my name, on the complete tank building process. I wanted to mimic the TSS tanks, so I made some of the features they used like the cut-outs in the lower rear and the slightly raised front. I sprayed the Bultaco’s two-color paint in a makeshift paint booth and Misa Macias and Jhony Mendoza at Luxe Auto Spas made it look much better than it rightfully should. My buddy Eli Scarbeary at Bearscar Designs did the seat and tank strap out of left over leather from the Alpha bike. And of course, finished off with the beautiful leather hand grips you can find at bearscar.com. The final stats? The racer weighs 209 lbs with a full tank of gas and oil. I don’t build bikes for anyone. It is my therapy and what keeps me sane. The best part about not having restrictions and the ability to make anything is the constant evolution of my abilities and knowledge. Remember motorcycles are supposed to be fun. Your only restrictions are in your head. Ride fast, safety last!