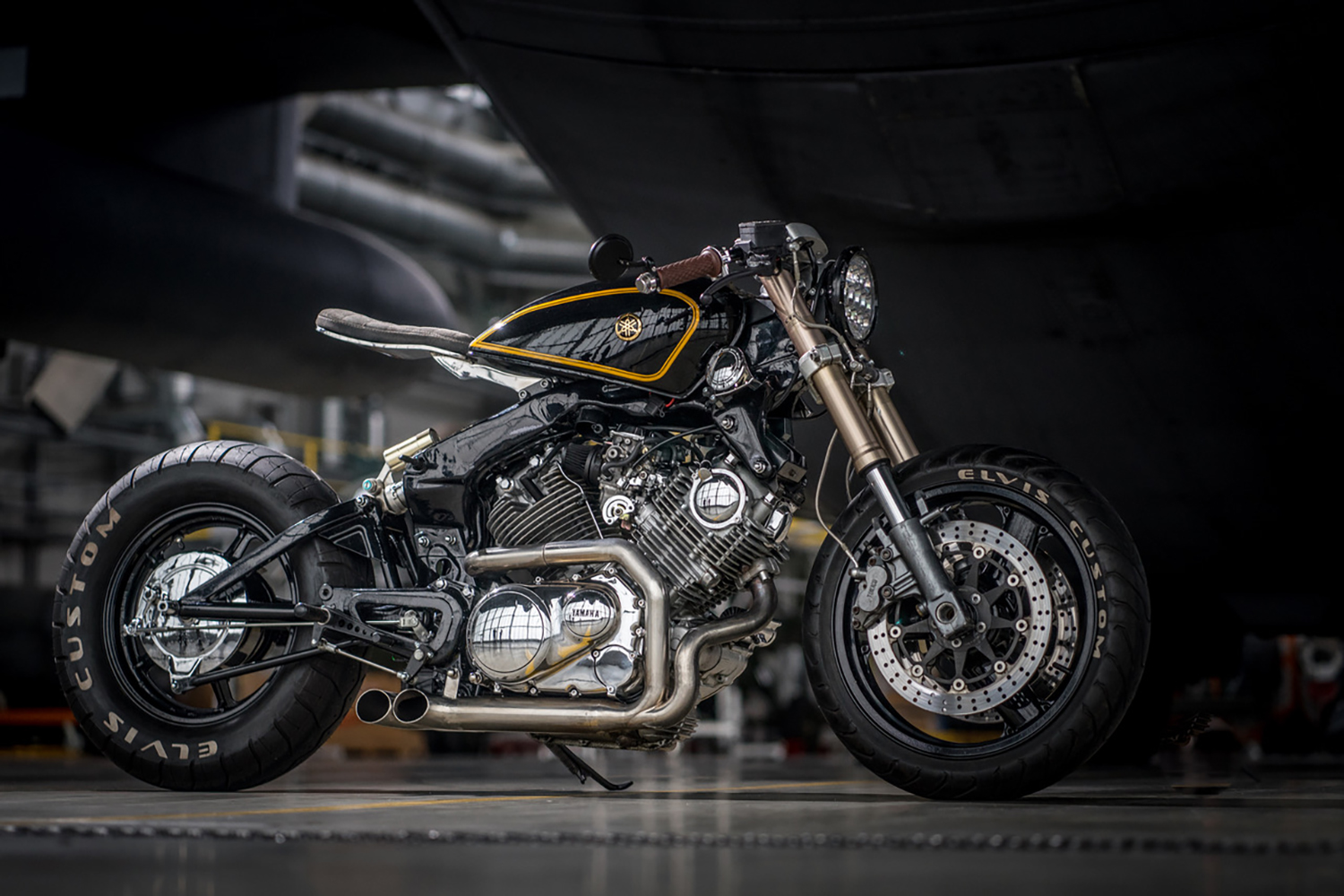 Keep your eye on the custom scene for long enough and you start to get a feel for the design of bikes that emanate from each country across the globe. While certain places may favour a particular style, when it comes to the Central European nation of Poland, almost all of their bikes take on a lean and mean vibe that’s impossible to shake. This Yamaha belonging to Radoslaw Tyc is no different and it’s exactly how he intended it. Playing the part of the ideas man, he teamed up with the country’s Elvis Custom and got to work creating his dream. Equal parts old and new, this sinister and snarling XV750 has got us all shook up.

While the XV range is well known around the world, they’re not exactly growing on trees in Poland and so for Rad to find what he was after he’d have to look further afield. Thankfully his search proved a success and he found a one owner XV750 in The Netherlands in very good condition for its age. But, even a well maintained bike that is nearly 40 years old is going to have a whole bunch of work that needs to be done to bring it up to truly A1 standard. It’s here that many budgets get blown, and although Rad faced this hurdle it wasn’t going to slow him down.

“Modifications and all work on this project consumed a lot of time and money. I didn’t take the latter into account,” he told us. But what he knew from the start was that he wanted local workshop Elvis Custom to do the work, while he bought the parts and came up with the ideas. Their first port of call was to give the bike the once over, rather than quickly strip it down, they got it into basic running condition so that any parts required from abroad could be ordered and no ugly surprises would greet them when they went to turn the key on the finished product.

With the sensible stuff out of the way, the frame, swingarm and rims were all sent out to be sandblasted, and thankfully they returned with no nasty surprises or rust holes. Back at Elvis, the first element of mean could be laid down and nothing does just that like a fresh coat of black powder! Before the new tyres were thrown on the lettering kit came out and that beefy rear rubber certainly makes a statement. The rear hub was rebuilt, the brake cover and actuating rods chrome plated and it was all bolted back together. Not happy with the factory controls, they were tossed aside for a set of custom rearsets that give a more aggressive riding position.

All of which works perfectly for what is above, as the XV is no longer the laid back larry ride it once was when it rolled out of the factory. There is no real subframe to speak of, instead, a polished stainless steel piece was custom crafted for the job and its only role is to act as the support for the seat. The old school leather with brilliant stitching provides a great contrast to the gleaming underside and Rad is in love.“It makes an electrifying impression and, interestingly is comfortable, which is rare in such projects.”

The tank is affixed to match the aggressive front heavy lines, before being painted up and the graphics airbrushed on. The gold on black look continues across to the suspension and it’s hard to have an aggressive look with those stock skinny front forks. So a modern set of USD units have been swapped in with a bearing and steering stem change. At the bottom of the legs, the big twin discs and Tokico calipers provide a braking boost and new braided lines were swapped over. At the rear, a new shock with full adjustability slides between the unique frame of the XV with the reservoir poking out the top.

Then to really show off the V-Twin engine in its best light, the whole thing has been overhauled and cleaned within an inch of its life. For the various side covers a mix of polishing and chrome plating brings a mirror finish to contrast with the raw metal. With such an old bike the carbs required a full rebuild and have been synchronised for smoothing running before a set of pod filters were fitted. But what really frames the engine and gives it a killer look and sound is the hand-built exhaust system. Made from stainless steel the twin exits were designed to make sure the thunderous twin is heard in all its glory.

The minimalist rear end look meant there was more wiring than space and an all-new loom is built from scratch. This also meant the standard switchgear was thrown away for bar hugging small buttons, bar end indicators and mirrors, that all help to give a clean look. The headlight gives a touch of modernity, the full LED array sitting hard against the forks and the rear indicators also serve as taillights. The final piece is the full function Koso Speedo that is neatly housed in front of the top tree and gives far more data than you’re ever likely to need. The finished product gets the mean vibe just right thanks to Elvis and every time Rad opens his garage door, he can’t help falling in love.