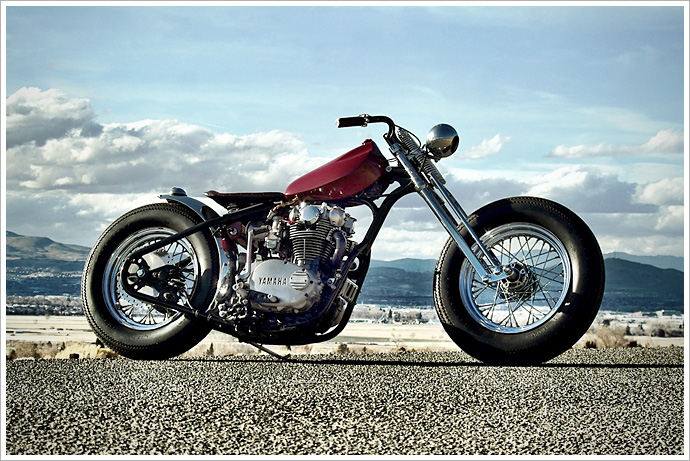 For many of us, families are like French truffles. They cost you all your cash, they are hard to find when you need them, and they are a very acquired taste. But for a lucky few, they turn out to be friends, inspiration, and trustworthy business partners all in one. The kind of relationship most bike builders who find themselves going it alone could only dream about. But for Danny and Lance Busch of Busch & Busch in Reno, Nevada, it’s an everyday reality. Since dreaming up the idea of a custom shop in High School and even printing t-shirts for it in art class, they’ve progressed to, well, to what you see here. Because what I see here is one of my all-time favourite XS’s. And that’s no Busch. Here’s Danny. “I got this bike as a total pile, basically because it had clean papers. We started chopping it up on Christmas Eve, 2009. It took about three years, in between other projects and interstate moves, to get it to this ‘almost done’ state. Shinya Kimura is my number one bike hero, and that will be obvious to anyone even slightly familiar with his amazing style. This bike is a humble tribute to him, but also influenced a bit by vintage sports cars, art deco and Lance’s iron will.” “Shinya Kimura is my number one bike hero”

“We kept only enough of the frame to give us the stock motor mounts, and the neck, but the rest is ours. We made just about everything on the bike, and the stuff that we didn’t make had to be modified. Harley wires, DNA springer, 5.00X16’s, SR caliper on a shaved down HD rotor. I rebuilt the motor, which was actually pretty clean considering how it looked on the outside. I probably could’ve gotten away with some Marvel Mystery Oil and just fired it up. Just kidding.” “I put some Mikuni round slides on because the original carbs were stripped, and I switched to a PMA kit because the stock charging system’s gremlins finally wore me out. It runs a lot better now. We ditched the starter and put a small battery where it used to go.

The seat and grips are leather, tooled and stitched by hand, on my own seat pan. Lance made the pipes and gas tank, and did a killer job on both. He did the paint in our garage, tented up like E.T. The paint looks like melted raspberries in the sun. I smile every time I see it. He also did the headlight and mount. My favorite part on the bike is the rear fender, because I learned so much while making it. Everything we do is a lesson for us, and I was very pleased at how it came out.” “All the machined aluminum on the bike was done by us. I really dig the oil filter cover, which holds a tiny bit more oil than the stock one, with cooling fins as well. I also put our logo on the alternator cover, which took several days of machining work on my little mill.” “Now that the bike is on the road, I’m very happy with it. It is the first bike I have ridden that actually fits me. I think we may have gotten a bit lucky, but ergonomically, I fit it like a glove. Lance always says that every picture he has taken of me riding it, I am grinning like an idiot. This is a clear indication that we definitely got this one right!

Big thanks to Lance for all his help on the bike, it really was a 50/50 effort. And thanks to him for the killer photo work as well!”