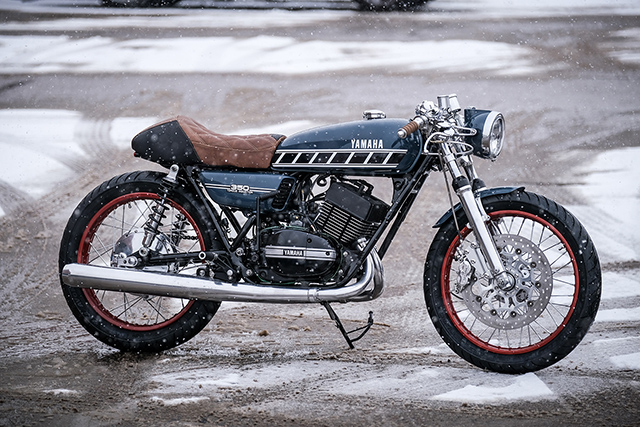 It’s easy to look at big workshops full of the latest tools and be envious, imagining if only you had them at your disposal. But as MacGyver showed us on TV, if you really know what you’re doing you can save the world a thousand times over with just a Swiss Army knife and some miscellaneous objects. Working out of his garage in Minneapolis, James Berreau brings that sort of attitude to the custom bike building game. With just his second build he’s whipped up this stunning 1974 Yamaha RD350 nicknamed ‘The Deuce’ that is oozing classic cool. 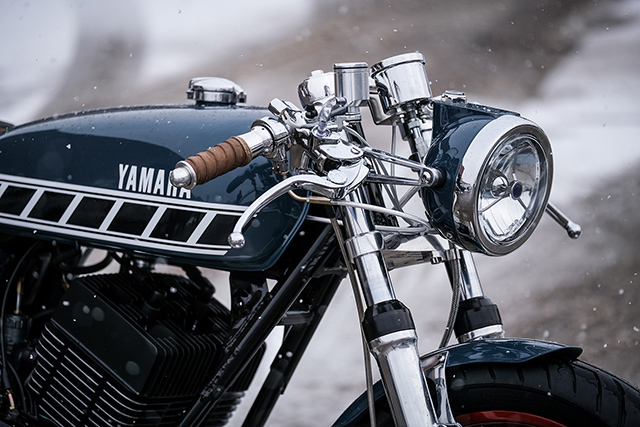 Just like ‘Mac’ on the TV show, James has military training having served as an aircraft electrician for six years in the US Air Force, before attending the Motorcycle Mechanics Institute in Phoenix, AZ. Now having spent 15 years in the R&D division of a major company as a senior test technician, he brings a wealth of skills to the table as he launches his custom bike building career. And in his home garage sits just one bike lift, a TIG welder and his Grandpa’s vintage WWII era lathe. Picking up the donor bike that had sat idle in a garage since 1978, James quickly set about putting his talents into action, stripping the bike, then “I cut the tail off the frame and added a hoop. Then drilled holes and added tubes in the rear hoop to integrate the LED tail/brake lights.” The stock seat pan was shortened 5in before being topped with the same distressed leather as the grips. While the front fender brackets were his own design that were cut by water jet, and he then welded in a new filler cap for the tank and sent the tins off for paint. The forks are from an XS650, with all new internals and polished lower legs. “I had a hard time finding a full billet triple clamp, so I found the stout upper and converted into a lower. Machined the stem hole to accept a GSXR aluminum stem and then I machined the upper portion of the stem to the RD specs.” While the rear end uses a set of the ever popular YSS shocks to keep the tyre planted. 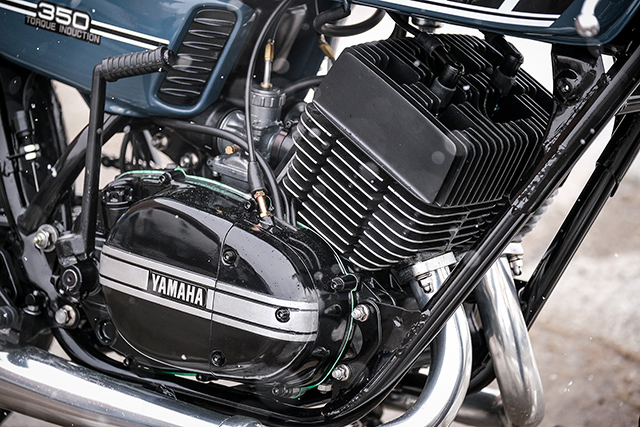 That rubber is courtesy of Avon, the RoadRiders giving the perfect match between the classic look and a modern compound. The hubs themselves have been sanded and polished before being laced to the powder-coated rims that give a real pop of colour. While braking was always a weak point of the old 2-stroke street bikes, not here, a Brembo front caliper and full-floating rotor conversion with radial master cylinder provide serious stopping power.

But if it wasn’t for the engine, it’s unlikely the RD would ever have been popular in the first place, let alone having created a cult following now. So rather than messing with it too much, it’s been rebuilt back to stock specs for reliability and avoid the tuning dramas of a hotted-up smoker. There are new gaskets and seal on the repainted donk with titanium bolts pulling the engine covers tight. While the beautiful twin pipes are ceramic coated to keep the heat inside. 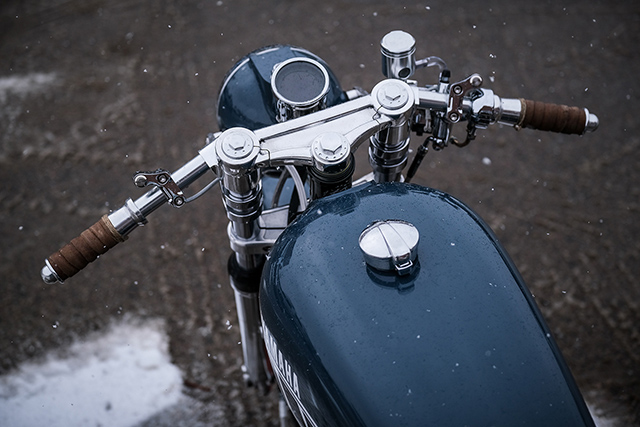 With a new chain and sprockets, affixed with more titanium bolts, the power gets to the rear wheel via a custom built Barnett clutch just for the application. While clicking through the cogs required some creative thinking and a hammer, “I combined two different manufacturers for the rear sets during finally assembly, there was some slight interference with the rear brake arm and the exhaust. The muffler needed to be persuaded to accommodate some needed space.” 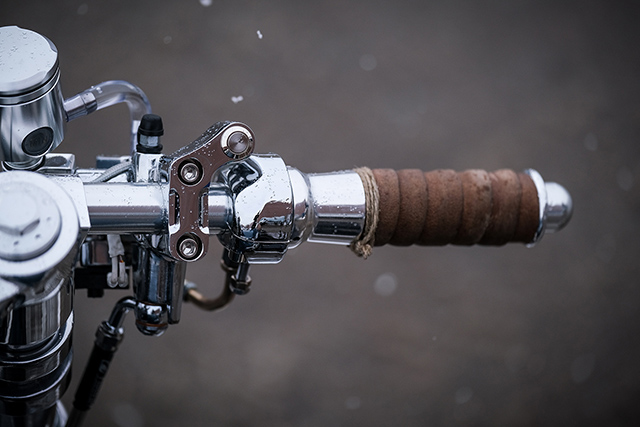 But its the functionality of the bike that is light years ahead of ’70s commuter machines. The custom-designed and machined switchgear is simply a work of art and pairs up with a new wiring harness and additional fuse blocks for the different circuits. The ignition has been converted to a Newtronics CDI unit and the regulator/rectifier replaced with a newer integrated style unit. With the frame powder coated, the bodywork only came back just in time, with the stunning paintwork finished so the ‘The Deuce’ could be displayed at the J&P Cycles Ultimate Builder Custom Bike Show.  James picked up the second place trophy in his category amongst some incredible competition and this MacGyver of the bike scene is off to a hell of a start in his custom career. 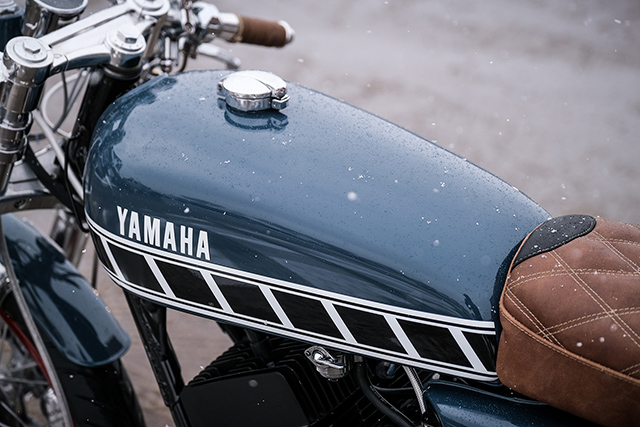 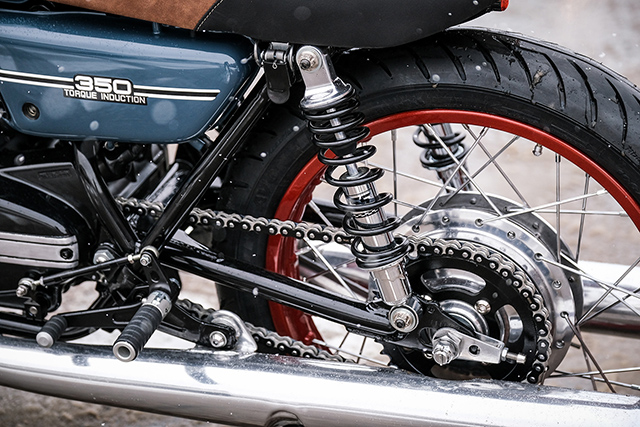 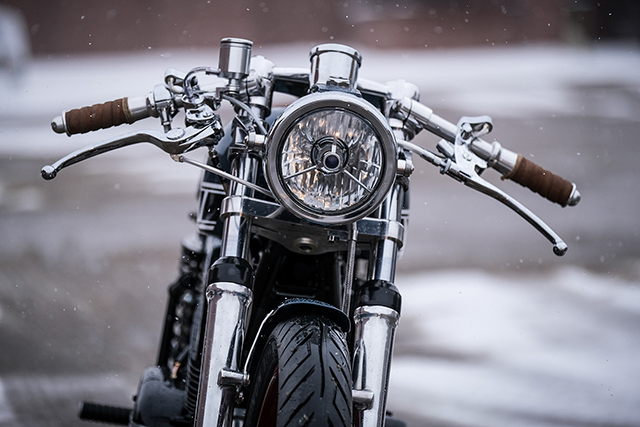 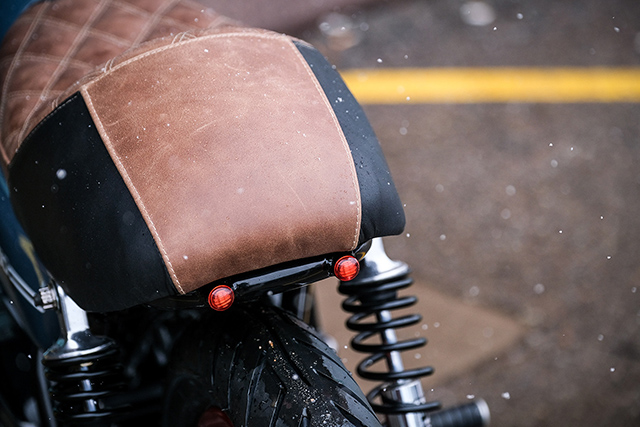