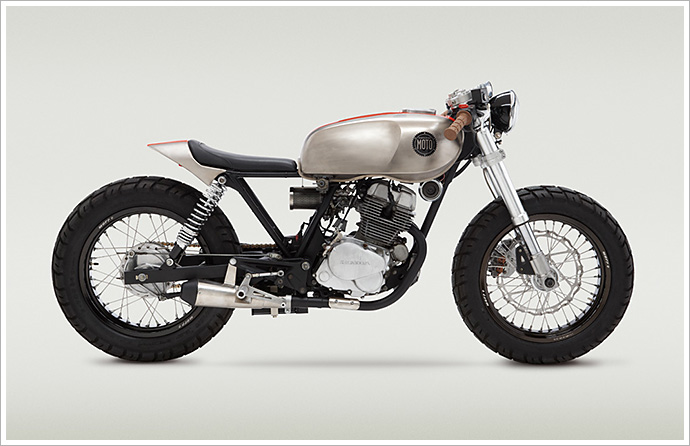 Name the most uncool motorbike you can think of. No, it’s not a lime green Harley chopper. Or a billet-covered Hayabusa with an extended swing arm. Hell, even the humble Honda CT110 has some redeeming features if you think about it. Oh no, if you really want to plumb the depths of icy, frigid lameness you’d be very hard pressed to beat the Honda CB250 NightHawk. In Australia, it’s (in)famous as the bike the public servants brought in their thousands for the government’s Motorbike Learner Schools and, just when you thought there was nothing more you could do to degrade a bike’s reputation, they went and welded giant protective crash frames onto them. Personally, I couldn’t think of a worse bike as a starting point for a custom build. Which makes what you see here all the more amazing. Meet Classified Moto’s “now we’re just showing off” masterpiece, the “MoHawk 250”. Hey – where’d all the lame go?

Here’s John. “Brant Shalikashvili lives in Washington, DC. He works at the Pentagon. He doesn’t own or want a car. He now rides a Classified commuter. He came to us with a fairly unusual request. He wanted a bike to ride around DC and to his job across the river. He hadn’t ridden bikes in years and had no interest in rubbing elbows with Hayabusas on I-395. Something small, light and fun around town — but very Classified.” “(our) mechanic had been wanting us to Classify one
just to see if it could be done.”

“Recently our riding buddy DeeDee Ray had sold me her ’92 Nighthawk 250 and it turned out to be the perfect donor bike. It’s reliable, light and definitely not fast. Plus, Greg (CM mechanic) had been wanting us to Classify one just to see if it could be done.

We talked about design and could tell that Brant had some love for the classic cafe style. That’s something we’ve avoided up to now, really just because it’s being covered pretty thoroughly out in the motosphere. Of all the bikes we’ve built, this one looks the most like a cafe racer. But we feel like we did it our own way.” “Pretty much everything is either nickel plated or powder coated. It’s got big gnarly tires. A splash of perforated metal for good measure. Modern Ducati forks. It’s a little different look for us, but it’s definitely Classified.

There were a lot of little things to figure out on this one, but overall the build was trouble free. Until we got to the exhaust and foot controls. Brant is fairly tall and we went to great lengths to get his feet in a comfortable position. Unfortunately, the best position interfered with the mufflers in a big way. It seems there’s something like that on every build. I figured the only way to keep the pegs in the preferred position was to notch out the cans to clear the pegs. It looks awesome. I broke down and bought a set of billet Loaded Gun rear sets. Alex TIG welded the foot control mounts. The whole thing cost 15 times what I estimated. But I love the result.” “if we were going for wheelies and burnouts,
we would not have started with the CB250”

“Another challenge was coaxing a little power out of the tiny motor. The big tires didn’t help, but we didn’t want to give up the ability to roll up over any curb so we did a lot of playing around with sprockets and jetting to get the best all-around feel. Now it can keep up with freeway traffic if need be, but it still feels peppy around town. But obviously, if we were going for wheelies and burnouts, we would not have started with the CB250. We love the way this thing looks and feels. And so does Brant. I’m sure critics will give us the newsflash it’s not fast. Neither is an old Karmann Ghia, but they’re both fun and easy to love.” A NightHawk in the, er, day