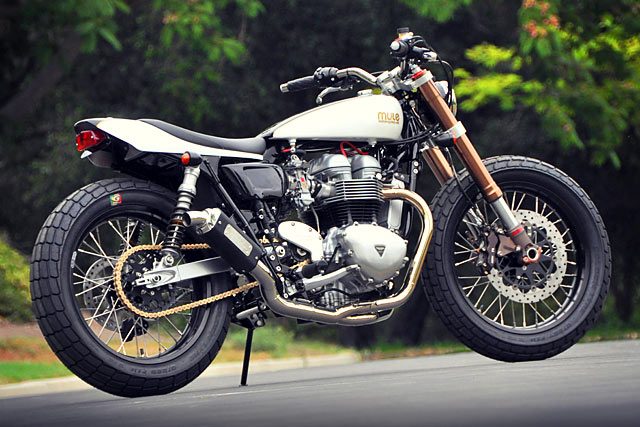 Good lord, you Northern Hemispherians have it tough. The lucky ones get to ride for six months of the year and spend the rest trying to wrench on their bikes while avoiding frostbite. And the not so lucky? Norwegian Axel Mustad gets his time to shine only three months of the year. So for his 2017 window of opportunity, he decided he was going to treat himself. Enter Richard Pollock and his trusty Mule Motorcycles with a Triumph street tracker that clearly made ol’ ‘Colonel’ Mustard feel like all his Christmases had come at once. “The bike is for a customer in Norway,” Rich begins. “He gave me a very short build time, as he needed the bike for the summer riding season, which he told me only lasts for around three months up there. He wanted a Triumph tracker in my usual style, with black and white paint, a gloss black powder coated frame, an aluminum can exhaust and some serious motor upgrades.” Needless to say, Richard made the deadline, shipped the bike and much riding was performed. And as the customer’s name was Axel Mustad, the bike quickly earned itself the “Colonel Mustard” moniker, too. The donor was an ‘04 Bonneville with around 1400 miles on the clock. Richard located it in Los Angeles, about 100 miles away from the shop. “It was nothing fancy,” says Richard. “Just a stock Triumph, really. In California these bikes are plentiful with low miles, no rust and are usually in good condition as they are fairly pedestrian in stock trim. I think they are marketed for and purchased by the ‘older’ retro crowd and come complete with 21st century reliability.” So Richard snapped it up and tore it down. As you do. “Next I mounted my seat kit, rear loop, and I removed the rear passenger peg mounts, which allows for tucking in the muffler higher and tighter. Then I attached a set of small fiberglass side panels, and my oil cooler kit.”

Next came an all-over black gloss finish.“The gloss is a huge improvement on the stock frame,” says Richard. Then the motor was dropped off at Triumph Performance USA for some serious upgrades. The shopping list included a 904cc big bore kit, new cams, intake manifolds, porting, big intake valves and FCR39 carbs. “Also, there’s the red plug wires which add no horsepower at the wheel, but are claimed to be an upgrade over the stocker,” says Richard. No added power? C’mon! Everyone knows they add at least 20 ponies… The sleek alloy fuel tank is from Racetec in Oxnard, California, and it’s done in the traditional ‘Trackmaster’ style. The black and pearl-white paint was expertly laid down by Superbike Paint in San Diego. “Then Mule lightweight hubs were laced to black anodized Sun rims, with stainless spokes and nipples, and a new set of Golden Tyres protect the rims.”

[superquote]“To call the new suspension set-up an upgrade would be like calling the Large Hadron Collider a really fancy donut.”[/superquote]

To call the new suspension set-up an upgrade would be like calling the Large Hadron Collider a really fancy donut. “The rear shocks are the emulsion-type Ohlins, which isn’t too shabby by itself,” says Rich. “But up front is a pair of forks and a caliper from an MV-Agusta F4. And the triple clamps are super wide customs with a 1″ drop, courtesy of A&A in San Francisco.” Finishing things off, some Mule stainless steel bars a with a Nissin radial master cylinder were bolted on, and a Sportster headlight was hung on a Joker Machine mount. Clearly, a lot of work went into the tracker’s exhaust. It’s all made from perfectly polished stainless, and was then crowned with a shortened DMC quad muffler. “A ‘special’ compliance plate was attached to the aluminum can to give the illusion that we give a crap about rules of any sort,” laughs Richard. “Basically, it goes fast, stops awesome, the seat has good padding, the suspension feels great and the ‘fully compliant’ exhaust sounds just like it should.”

When we quizzed him on the hardest part of the build, Richard grimaced and said, “Probably getting the tank made. But I’ve found a new tank builder who’s much nicer to deal with, although he’s much further away.” Sounds like a good excuse to go for a ride, then. “There’s three things that really make me smile about the finished bike,” says Richard. “I really like the paint job, as I always painted my old race trackers like this (see the photo below). I’m also super happy with the way the exhaust tucks in and sounds, and of course the high point would have to be the front end.” Almost sounds too good to be kept in a garage for 9 months of the year, huh? I wonder if Colonel Mustard might enjoy a winter holiday in the Southern Hemisphere? Here’s hoping.