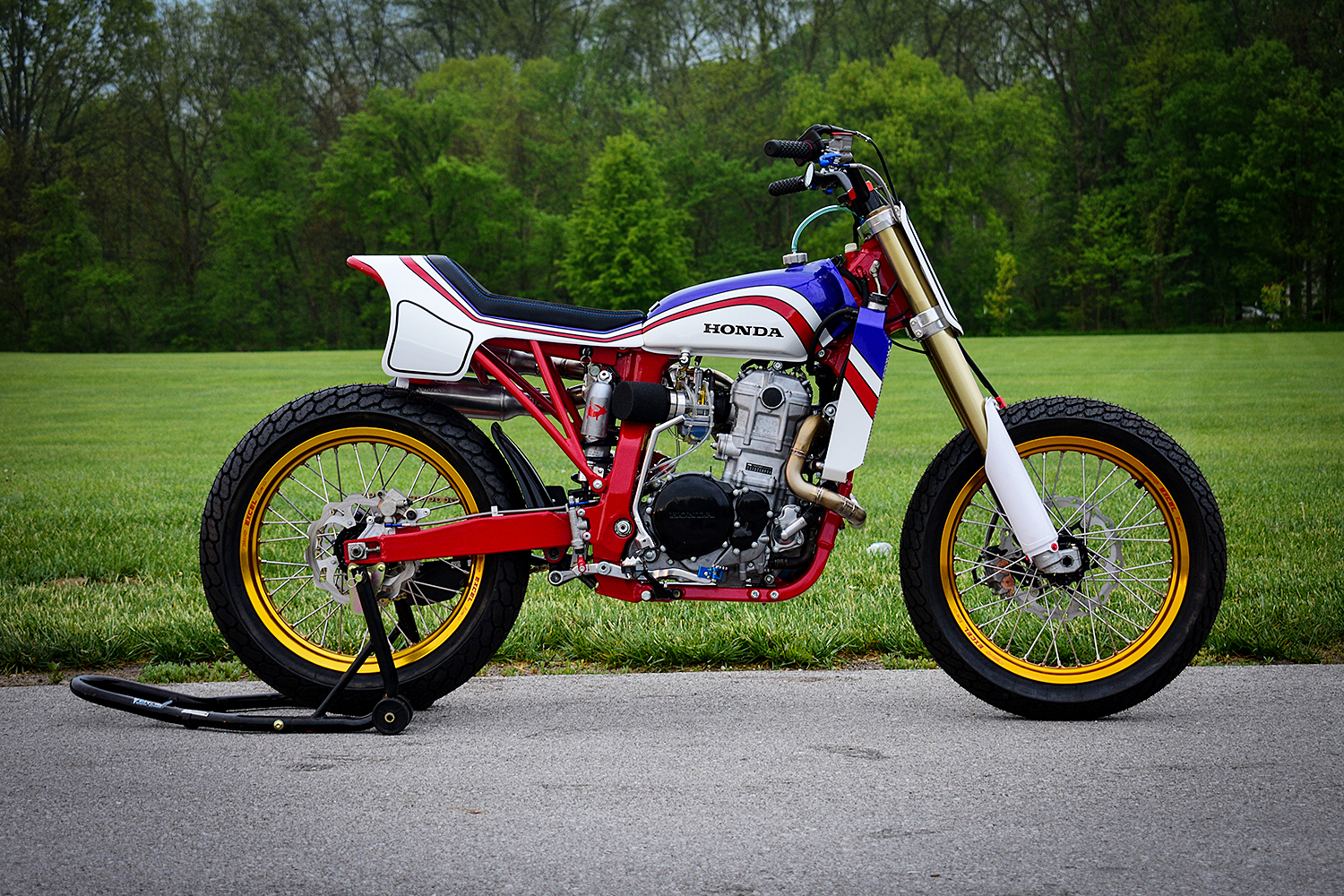 They say when you’re on a good thing you should stick to it, and Spencer from Parr Motorcycles is definitely on a good thing. He came in hot last year with two outstanding Suzuki retro-styled builds that spread like wildfire around the world wide web, although this time he decided to use a different brand of bike. “Going into this build I knew two things: it’s going to be a Honda and it’s going to be a street tracker,” recalls Spencer. Over the following months Spencer scoured the internet looking for the perfect bike. He eventually found a bone stock 2002 Honda XR650R – aka the “big red pig” – a state away and snapped it up faster than you can say “dual-radiator liquid cooling system”. The Honda XR650R has a cult-like status and a reputation as one of the best dual sport motorbikes ever made. Not only do they have the Honda reliability, but also loads of grunt, which made it a perfect choice for the latest Parr project.

Once Spencer got the bike home, he didn’t mess around getting started. “The design was already completed, because I have had this design in my head for years now. Growing up around flat track racing, the Honda RS750 was a bike that just stood out to me. I always wondered — what would a street-legal inspired RS750 would look like? That is how this project got started.”

Like his previous projects, he went about removing all the superfluous parts: the plastics, tank, air filter box, headlight and subframe. Once he had a roller and the engine was exposed he started thinking about the tank. “Since the frame had a two-inch-wide backbone, I knew I could either try and find a tank that fit or I would have to make one. I picked up a ’74 Honda CR125 Elsinore tank just to try and fit it over the frame, and with a little love, it fit perfectly.”

Suspension was next on the list. The stock XRR forks were swapped for a set of Honda CRF Showa forks that Spencer rebuilt with Racetech goodies and then lowered. For the rear, he decided to rebuild the stock shock and lower it to compliment the front. “Once the bike was sitting properly, I started on the subframe. When designing the removable subframe, it needed to have an integrated electronics box, integrated plate holder and sit higher in the rear to allow the dual LED brake lights to be seen by other motorists.” Once the subframe was completed, he moved on to the exhaust.

With the Honda RS750 being his inspiration, a dual high pipe setup was built with SuperTrapp aluminum mufflers to compliment the classic flat track vibe. Then, at the back, an aluminum seat and tail section were then fabricated to match the flat track styling, even incorporating a discreet number plate.

Then for the paint. What colour do you choose when building a vintage looking Honda? “I knew it was going to be red, white, and blue on a red frame. Looking at the design of the RS750, I wanted it to flow front-to-back instead of having only the design on the tank and rear of the bike. Once I got everything back from paint, the fun began. The rebuilt motor was stuffed into the red frame and it soon started to look like a motorcycle. The rebuilt suspension was installed and soon enough, the 19” Gold Dubya Wheels wrapped in Mitas H-18 tires were installed.”

Soon Spencer had a painted roller and could see all his ideas and hard work coming to life. After the dual exhaust was installed, he added Mylers radiators and covers. One of our favourite features on the bike is the lighting setup on the front and back. “To compliment the vertical brake and turn lights in the rear, I installed running and turn signals inside the radiator guards just to give it some added flavour. Other electronics were soon installed, like my Baja Designs S2 Pro headlight, Motogadget Motoscope Mini speedo and push buttons on the handlebars to control everything on the bike.”

To keep a close eye on the temperature, Spencer mounted a Trail Tech Temp gauge above the tank. He also replaced the carbs with high performance Lectron carbs to give the XR a little more pep and reliability. “Since the bike went from being a dirt bike to now a road bike, a keyed ignition had to be included, which is also integrated into the subframe.”

To finish the bike off, a seat was made and covered with black vinyl on the sides and a suede-like microfibre called alcantara in the middle. He also upgraded the stopping power, choosing Galfer rotors and brakes. “Since the build has concluded, it’s far exceeded my expectations in performance and rideability. After 8 months the build is complete and now coined the Retro-Tracker!” It’s safe to say Spencer is happier than a big red pig in mud with the end result.