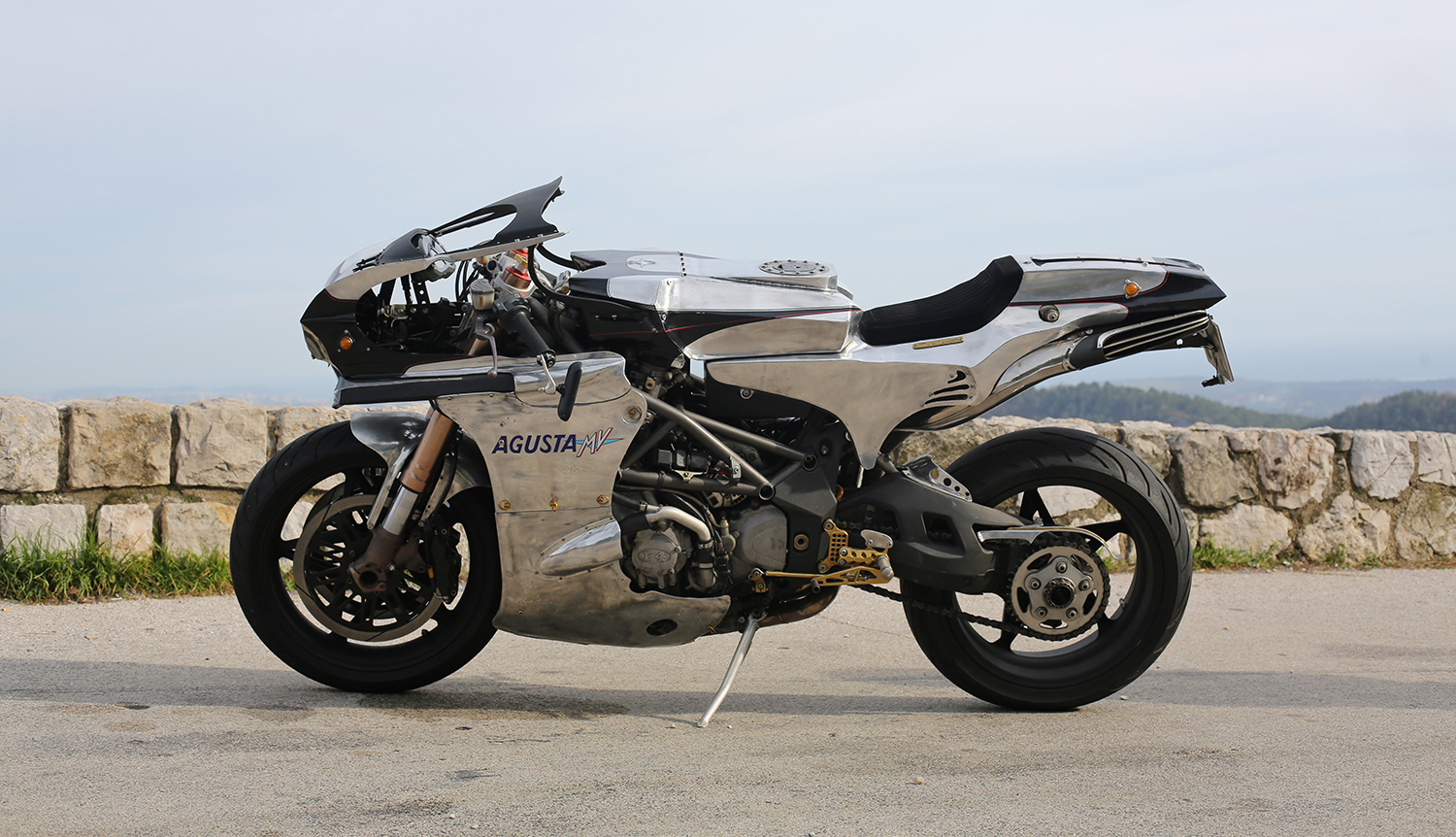 It may be an almost unbelievable statement, but it wasn’t until 2013 before I properly rode a four cylinder bike for the first time. Having thus far been married to Ducati and the v twin, this felt like an incredibly exciting infidelity. My first ride on an MV Agusta F4 750 was a game changer, albeit slightly lacking in bottom end grunt, the thrill of hearing and feeling that engine scream its way beyond 16,000 rpm was a revelation and like nothing I had ever previously experienced. The engine is derived from the early ‘90’s era Formula One Ferrari engine and indeed MV Agusta, owned by Cagiva at the time, received plenty of assistance from Ferrari when designing the engine. At full chat the thing definitely sounds quite Formula One-esque with its blood curdling top end scream. The razor sharp lines of the fairings were drawn by Massimo Tamburini who also took aerodynamic inspiration from F1.

I digress. All of this to say that when the time came to commission a build from the godfather of custom bike building, Shinya Kimura, the F4 was what I chose for him. He was the only person I believed who could justifiably rebody a Tamburini icon and although the purists will say it’s a travesty, I forever strive for something truly different.

As a ten year old boy, Shinya’s creativity was already evident, he enjoyed repainting his bicycle, adding decals and occasionally tweaking mechanical parts. He reflects on his career as a continuation of his young enthrallment with aesthetics, and how his inspirations are derived from childhood experiences. His father’s rivet making factory in Tokyo, the sounds, sights and smells of oil and steel, all play on his mind as he shapes metal with his bare hands and a few rudimentary tools. His parents were both calligraphers and through this art form he learnt not only the balance of an individual letter but also about negative space and harmony, this has an obvious impact on his work. The one time I met Shinya, his calmness and spirituality were evident; for every five hundred of my hyperactive and over excited words, he’d look at me thoughtfully, almost bewildered, he’d weigh his words and reply in one meaningful and infinitely wiser sentence.

Shinya initially studied entomology, specialising in social wasps, but in 1985 his fascination drew him to a motorcycle dealership where he started to learn his trade, working on all sorts of different machines and becoming adept with mechanics, bodywork and paint. A few years later he found himself in charge of the restoration department, where he gained further knowledge and his inimitable skill. In 1991 he started his own custom and restoration company, coinciding with the Harley Davidson boom in Japan. A year later, he teamed up with a parts company and founded Zero Engineering, in the proceeding 14 years he and six other mechanics built a staggering 300 bikes.

Metal is the chosen material purely because of the pleasure derived from the process, despite the weight gain he prefers to use aluminium over fibreglass or plastic.

Just after my wife and I married, I commissioned a sculpture of her, I sat and watched most of the process. As it was approaching completion, I asked the sculptor how he knew it was finished, he scratched his head and explained how hard it is for him to stand back and say it’s done. Shinya, clearly struggles with the same problem; “when it comes to metal shaping, it’s very difficult to draw a finish line. I see it from all directions and angles, when all the parts from the tip of the front tyre to the end of the rear tyre flow in harmony as a whole, I’ll say it’s finished. It’s very hard to tell myself when to stop, that’s why I never set a strict timeline for myself.” The sculptor within Shinya is what sets him apart from other builders, although he claims that motorcycles that are purely art and not functional are “creepy,” I totally understand that sentiment! A bike has to be able to fulfil its fundamental reason for being.

It was about this time seven years ago that I started wooing Shinya, I was obviously enthusiastic but as a comparative unknown it took a little convincing to get Shinya to agree to build what has become a crown jewel of my collection. In mid winter 2015, I ride a hideous rental Harley to his shop. My eyes boggle when I walk in, I’ve never seen anything quite like it before or since. If Ali Baba were to curate hundreds of exquisite items, all handmade, all beautiful, his cave might look something like this. From floor to ceiling the workshop is crammed with metal, it’s a wonderful place that I long to return to.

On the mezzanine, placed neatly on a sort of homemade pallet, is the 1957 Triumph Needle, an immeasurably beautiful object. On the ground floor a svengalian black Harley roars to life, giving me tinnitus for a day and a half. Amongst all these muted tones a slice of red and silver Italian exotica stands out like a sore thumb. The F4 has made it all the way from a nondescript car dealership in south east England, via London and thousands of miles of ocean and land to Asuza, California, it is ready to undergo surgery. I sit on the bike and he eyes me up, mentally measuring my dimensions and how I fit on the bike, we speak briefly about my likes and dislikes and promptly pop out for a canyon ride. Shinya on the F4 and me on one of his previous contraptions, a Honda I think. We blast about for half an hour, a sort of biker ritual, satisfied that he knows me a bit better we head back to the shop and before long I’m on my way.

From that moment until the time the bike is nearing completion and I’m getting hassle from US. customs, saying that the bike is overdue it’s return to the UK, we barely exchange a word. Shinya diligently works away on the bike for about a year, from time to time I get an Instagram notification with an update of the build and I love watching the process unfold. Upon completion it’s sent to my parents house in Scotland, arriving on a crisp winter’s morning and sleeping it’s first few nights in the garage, amongst the fertiliser and lawnmowers. I need to get a local engineer to help charge up the battery with my dad, fascinated, looking on. As a man who spent much of his life surrounded by art, as a second generation custodian of a significant collection of paintings and as a patron to the cause, when my dad gives his nod of approval, describing the bike as art and something spectacular, my beliefs are confirmed. I later take it to the Bikeshed Show in London to critical acclaim.

As you walk into my garage “Manta” is instantly noticeable, the slight asymmetry, the plentiful fixings on show (in stark contrast to Max Hazan’s bikes that sit next to it, devoid of any visible fixings), the brutalist form of the tank and fairing all draw opinion. Shinya’s work is clearly art and as such it is subjective, and polarising, we are all welcome to our own opinion on the finished object. I can’t say that everyone loves it, in fact it could be described as a marmite bike, it’s certainly a conversation starter, which I love and I think Shinya would too if he were a fly on the wall. I can’t help but admire the mastery behind the creation.

Apart from the pinky pinching bodywork that meets at the tip of the handlebar, the bike performs as it did before, it’s still just as capable, just as fast and as I look down, from my perch, at the handmade front end, it feels infinitely more special than just about anything I have ever ridden. A redeeming and indisputable feature is that it’s clearly and truly handmade, you don’t need to look closely to see indentations from metal on metal strikes, everything is made by hand, nothing is drawn beforehand, it’s done by feel and eye, even the “FOR G.H” is slightly wonky. Every bike he builds has a bit of Shinya’s soul in it and for that I feel profoundly grateful to have “Manta” in my custodianship.