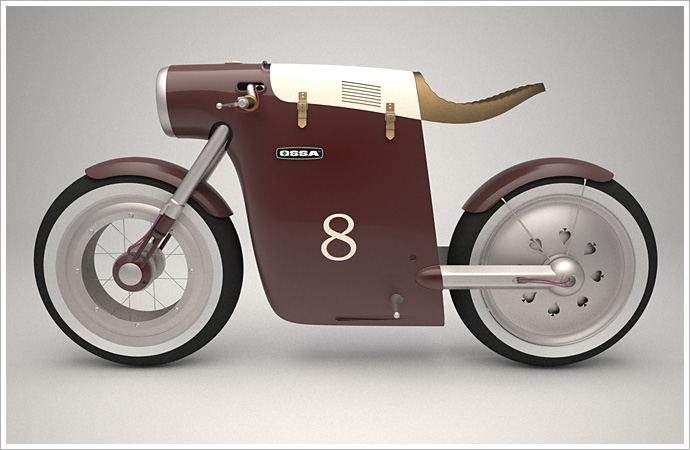 It’s been quite a while since we’ve had a decent concept bike on this here ol’ Hot Tubes blog and what better way to celebrate a triumphant return than with this insanely cool concept out of the offices of the Art-Tic design studios, located smack bang in middle of downtown Barcelona, Spain. Designed for the the Spanish Marque Ossa, it represents the company’s first non-trials foray since the early 1970s. The brief from Ossa to Art-Tic was the stuff that any bike designer only dares dream about; take a classic race bike from the 1960s and update it for the 21st century. The result? A bike any rider would only dare dream about, and it has a Wacky Races sticker on it. Any cooler, and it’d turn nipples into diamonds at fifty paces. Mujers and hombres, feast your eyes on this. “This e-concept motorcycle is a tribute to the classic Ossa monocasco which Santiago Herrero rode in four Grand Prix races before his fatal crash in 1970 at the Isle of Man TT GP,” says art-tic chief design dude, Bruno. “However, this piece is part of a new generation of motorcycles wich are cleaner and not only in their forms (runing with lithium-ion battery packs). However, this e-naked is designed more for the café rather than for the competition.” “It design lines are compact and very close to the user. A trunk bound with two leather belts gives us access to the mechanics and can also be used to store some personal effects.” “The seat is integrated in the design lines of the bodywork and provides an intuitive and dominant riding position. Although a short suspensions and a more curved seat to reduce its height (maximum seat height might be between 730 and 750mm and a wheelbase around 1350mm), will lower the center of gravity and will provide more confidence to the pilot during the stops ands and while driving at low speeds.” Monza, 1968; Santiago and the original Ossa “Monocasco,” or “Monocoque” as we say in, um, English