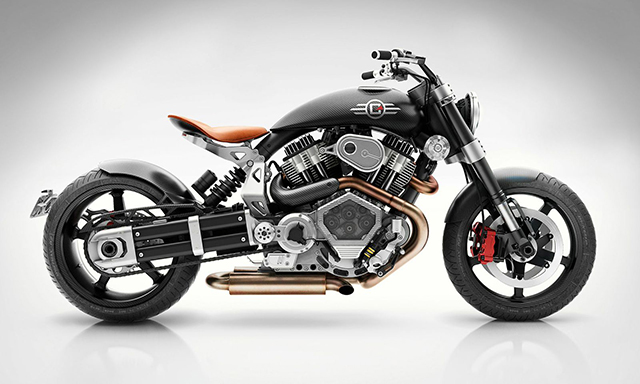 In the beginning there was the Confederate X132 Hellcat. It was good and fast and broke speed records. But it needed something else. It needed the touch of Pierre Terblanche. The former Ducati designer was brought in to give the American hotrod a different style, something fresh and unique. And it takes a hell of a designer to take an already out there bike and make it even more… well… out there. Let us introduce you to (deep breath) the Confederate Motorcycles X132 Hellcat Speedster. The bike is dominated by that big 132 inch V twin of Confederate’s own design. Putting out 140 torques, the fuel injected powerplant is the same one that propelled the Hellcat to a speed record at Bonneville a few years ago. With an ECU that is tuned for performance more than cruising capabilities, the power is sent through a five speed transmission fitted with drag racing ratios. All that power means nothing without being able to put it into the ground. At the back end is a custom Race Tech centre mounted shock. The 29° front forks are 48mm, fitted up with a Beringer four pot dual caliper biting into Beringer ductile rotors. Both front and rear suspension are fully adjustable, for both rebound and compression. The rolling stock on the machine are 18 inch Blackstone Tek Carbon Fibre, shod in Metzeler Me880 rubber. The fuel tank is a one piece seamless unit, designed in house at Confederate Motorcycles. Finished in clear coat over carbon fibre, it follows the curve of the 3 inch backbone beautifully. To give that American riding position, a leather bound tractor style seat was utilised, along with forward controls. This Hellcat Speedster is being limited in production to only 65 bikes, ensuring that these already unique bikes maintain their ability to stand out in a crowd. From the CNC billet engine case, to the work of art exhaust system draped upon the engine block, the amount of work put into this bike shows. With a touch of Terblanche, this naked bike is just the beginning of a new styling direction for Confederate motorcycles, and the future is looking good.