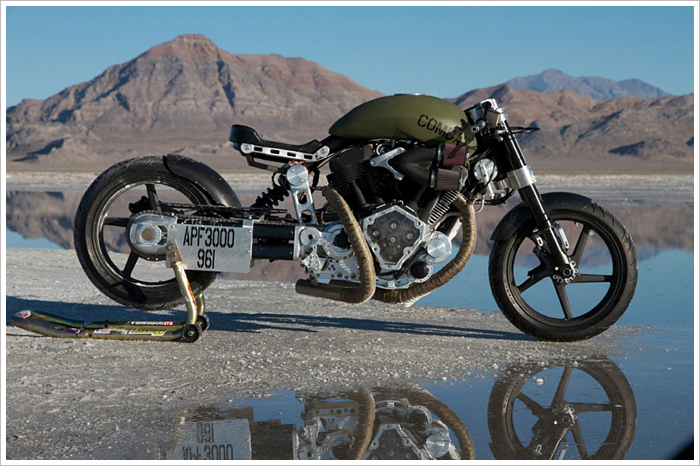 The Bonneville salt flats are a magical place. A sprawling wasteland that comes alive at different points during the year, with the sound of silence overcome by hard revving engines, and the ghosts of legends who have been there before. The whole nature of the place pushes bike (and car and truck) builders to the the edge of their engineering limits, and it takes some skills to come out on top. Confederate Motorcycles are one firm who have what it takes. After taking their X132 Hellcat Combat to 177.211 miles an hour on the flats, they have taken the landspeed record for the fastest big block V-twin ever. It’s an achievement that is 21 years in the making, through natural disaster and multiple learning experiences, but it sure is worth it. Confederate motorcycles started out as an idea in 1992, the first 9 months of the company based on building a conception of what a good proper American motorcycle should be like. A move to San Francisco, by chance meeting up with America’s leading drag racing chassis engineers ended up with some good ideas and some direction for the first prototype. Using Confederate’s own principle of ‘skeletal minimalism’, the bike had to be bare bones, with a lack of flair for flairs’ sake. As much design and manufacture was done in house, with Confederate using their own engine and transmissions in their bikes. The first round of customer bikes were built, then Hurricane Katrina hit and made a mess of Confederates’ workshop, and the bike building firm were given a chance to reassess their second gen bikes. It also gave them a chance to reassess their goals, and something that came up was a run at the Bonneville Saltflats. Using their road-going X132 Hellcat, little was required equipment wise to prepare a bike for a high speed saltflat run. Boosting the rake from 23.5 degrees up to 29 degrees pushed the wheelbase up to 66.5”, making for more stability at high speed. The 17” Pirelli Diablo Rossi shod Blackstone rolling hardware was carried over from the roadbike, as well as the frame, showing the quality of the build of the plain street (if you could call it that) Hellcat bike. Marzocchi 50mm forks up front, matched to a Custom race tech suspension setup, with both allowing for adjustability in rebound and compression, to suit high and low speed applications. When you’re taking a bike to 177.211mph, you want a damn good braking system to pull you up at the end of your run. Confederate has raided the parts bins of the best in the friction business, to be able to stop this 490lb machine. Front end equipment includes dual Beringer 4 pot calipers biting into Aeronal floating ductile iron rotors. Back end is fully Brembo equipped, with a two piston caliper on a crossdrilled stainless steel disc. Confederate are lucky in that they have the ability to design and build their own engines to use in their bikes, making sure nothing is left to chance in the majority of the build. Their fuel injected X132 street bike has been carried over, it’s presence dominating the Spartan frame. A one piece forged crank, working with a square 4.00” bore and stroke, produce a 2163cc capacity. Combat dual side draft intakes with 58mm throttlebodies, controlled by a ‘Combat’ performance ECU allow the bike to put out 160bhp, with 160 foot pounds of torque, exactly what you want when chasing a landspeed record. Aesthetically, Confederate’s ‘skeletal minimalism’ principle  shows. No fairings, a simple Motogadget readout, the Combat reverse hide racing saddle being no larger than what is required to hold a butt, show that this is bike as more for go than show. Like many bikes on Pipeburn though, the end result is easy on the eye, sometimes more for beauty of engineering than anything else. The olive green 4.75 gallon fuel tank, as per pretty much everything else, is Confederate designed and manufactured. If you should happen to purchase one of the 36 customer supplied models, you get personalised tank graphics as well. It’s a bike with a purpose, built with a philosophy of barebones engineering in mind, using the best parts available, whether they had to be outsourced or manufactured by Confederate motorcycles themselves. A world class bike, a land speed record, all coming from a workshop in New Orleans, that started up 21 years ago when the firm decided to build a motorcycle from scratch. And what a long way they have come.

I will let James Hoegh, the rider who took the X132 to the landspeed record, have the last word:

“A landspeed record is the culmination of countless hours of work, preparation, sweat and expense. There it’s very gratifying and emotional, even, when it pays off. It means our Confederate team is among the finest, the bike world class, and my skills adequate, though not complete. It validates that we belong at Bonneville, and that we are not only in the race, but at the cutting edge of performance”.