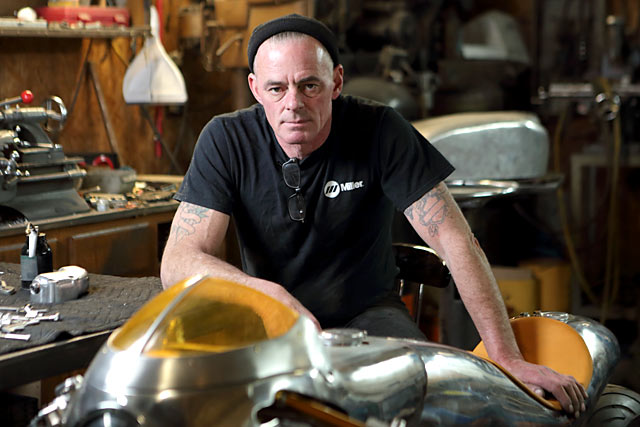 There’s a lot of Aussies that feel rightly proud of local boy Craig Rodsmith. From bombing around on bikes in one of Melbourne’s rough and tumble Northern Suburbs in the 1970s to rubbing shoulders with the likes of Max Hazan and Bobby Haas, here’s a custom builder that takes the phrase ‘good with his hands’ to preposterous new heights. He now calls Chicago ‘home’ and making some of the world’s best custom motorcycles ‘a job’. But in typical Aussie fashion, he’s taking it all with a grain of salt, a lit ‘durry’ and a refreshing glass of vodka lemonade. We just spoke to him to see how he did it.

G’day. I’m Craig Rodsmith, a transplant from Melbourne, Australia now residing in Illinois. At the moment I can say I’m a “custom motorcycle builder”. I’m in the very fortunate position to say that because it’s not something I take for granted.

I suppose it’s an obsession that begun at a young age. I obviously wasn’t setting out to be a ‘professional motorcycle builder’. I just loved mechanical things; especially bikes. The danger, the independence and probably as a typically impressionable boy, the ‘romance’. As much as I love original bikes, I found it was way more fun to alter and change them, mainly out of necessity as I couldn’t have a new or original bike, so I’d get fucked up ones and make them into what I’d want them to be. I’m still trying to come to terms with the attention I’m getting, it’s actually quite surreal, I still think of myself as that kid in Australia “wasting” his time in his dad’s garage fucking with some part of a bike for hours. Part of me feels guilty; I’m not sure why, but I’m trying to embrace it. I’m in a position now where I can afford to buy nice components, but I still want to make everything myself.

Right now, I’m 55 and physically I feel like shit because I’ve gotten so excited about what I’m doing that I work 80 plus hours a week. But I’ve never felt so happy. I wouldn’t trade where I am right now for anything, it’s not the attention I like; it’s quite flattering but it makes me very uncomfortable. Let’s face it, I have a pretty unimportant job but at the moment I play with motorcycles and I really like it.

I’m on my couch in my very modest suburban Chicago apartment. It’s a lovely warm night, the window is open with a fan blowing. There’s a full ashtray and a muted documentary on the telly. I’m a big history buff. I’ve got a slowly warming vodka and lemonade as I waste my time talking to the likes of you. My beloved cat Nova is here, too. Tell us about growing up in Melbourne

I’m not sure I ever grew up! I was born in the centre of Melbourne, at the Royal Women’s Hospital, which I think is now demolished. Probably right after I was born! I grew up in Reservoir, the jewel of Melbourne’s North! Terrorizing the streets and vacant paddocks on everything from my BSA Bantam to early XR75s, thinking I was either Marlon Brando or Steve McQueen. I also remember going to see On Any Sunday at the local cinema when it came out. That definitely made a lasting impression.

[superquote]“I also remember going to see On Any Sunday when it came out. That definitely made a lasting impression.”[/superquote]

Where does your creativity come from, do you think?

That’s a hard question to answer. I love to make things work but I believe it should be pleasing to look at. Sometimes, just the ‘mechanicalness’ of something is beautiful on its own. I wrote a lot of stories and poems in primary school, but I grew up in a rough neighbourhood. Imagine getting a school poetry award and then wanting to join the footy game at lunchtime? And on top of that I’m a redhead. I learnt a lot about defending myself, physically and otherwise. It’s probably why I embraced punk rock. I was a drummer in a few of the original Melbourne punk bands.

My first real bike was a BSA Bantam. When I was about 12, I asked Mum and Dad for a motorbike for Christmas and they basically said if you want a bike, get a job and buy it yourself. So, I got a paper round, saved every cent and bought the BSA. I tried to make it run 95% of the time and I rode it about 5% of the time. I had no money, so when the throttle, clutch and brake cables broke I just turned up the idle, put it in second gear and push started it. With no brakes, I hit a tree with no helmet on and ended up with about 20 stitches in the top of my head.

Why did you decide to start a custom shop?

I don’t think wanting to be a custom bike builder was really a conscious thing. I’ve never really thought about it, it’s just what I do. I’ve done this for almost forty years and until recently, I never made any money. I’ve never really considered it a job. I’m now extremely fortunate; I even feel a little guilty making a living doing it.

Why did you relocate to Chicago?

Growing up in Australia in the 60s and 70s, we’d be exposed to what the Americans, English and Europeans had through their magazines. But we couldn’t get our hands on it, so we all made our own interpretations. Then I came to America in the late eighties to buy bikes and ship them home. I ended up getting married, having a few kids and getting divorced – probably because I spent so much time fucking with bikes instead of fucking my wife. I’m okay with that though, and I ended up with some great kids that think they have a cool dad. They’re as crazy as their father, but I love them anyway.

Talk us through your process for building a bike

I usually have an initial idea or theme; a very ‘overall’ design which I don’t stray from very much. I never do drawings because I just can’t draw. I like to build what I have imagined, but I refine the details as I go making small allowances. Often, I can start with the smallest, most simple part and go from there. Like my Dustbin bike. Although the fairing wasn’t really a small part, it was the nexus and from there I built the rest of the bike to fit.

So, straight from your head to the bike?

Yes. I think that’s why I tend to build relatively fast. I get so excited that I can’t stop and I don’t want to impede the process. If I go too slow, I end up changing my mind too much and I start building something else. What bikes are you working on now?

I really want to finish my Harley/Ducati. But I have a few customer’s bikes I’m tying up; there’s an early Goldwing cafe and another Ironhead Sportster cafe which I’m very excited about. I also have another loop frame Guzzi that I want to supercharge and do some silly stuff with. I’ve started on another build with Bobby for the Haas Moto Museum which is very cloak and dagger shit. But I will say this – it definitely won’t fit into any known category.

[superquote]“I’ve started on another build with Bobby for the Haas Moto Museum which is very cloak and dagger shit.”[/superquote]

I have a ‘98 Ducati monster which I’ve modified a little; it’s got custom tank and seat. It leaks oil, the rear brake doesn’t work, the fork seals have blown, but I don’t care, and I beat the shit out of it. I just love v-twins, especially Italian ones! Oh, and I have the turbo V9 Guzzi that I was commissioned to build for Moto Guzzi over here. Now that the Midwest weather is nice, I intend to ride that a bit! I’ve never had a new or modern bike before. An Aprilia RSV4, and I’d probably end up dying on it. I’m not as young and quick as I think. It’s everything I’m not; refined and high-tech. It has wheelie control, lean control and over 200 horsepower. Why am I attracted to it? Dumb question, right? And I find it a beautiful design; it’s just beautiful bike.

It’s a toss-up between a Vincent Black Shadow and an MV Agusta 750SS. Realistically, I think I’d want to own and ride the MV. I once rode something similar, by the way. In my twenties, I worked at Maurie Quincy’s on Elizabeth street in Melbourne. It was motorbike central. We had one of Agostini’s 750 MVs. I was told that I should ride a different bike each day just to keep them charged. They didn’t have to tell me twice!

Where do you see yourself in 12 months?

As I’m getting older, I doubt I can always work like I do now, so I want to get in a position of relative financial security and just continue what I’m doing. One thing that I’ve recently realized is I have something I enjoy sharing, so I’d love to have the means to have open houses at my shop where younger builders can come and learn from me and each other – and so I can learn something from them. I just want to keep doing what I love. As I said, I don’t really have a job.