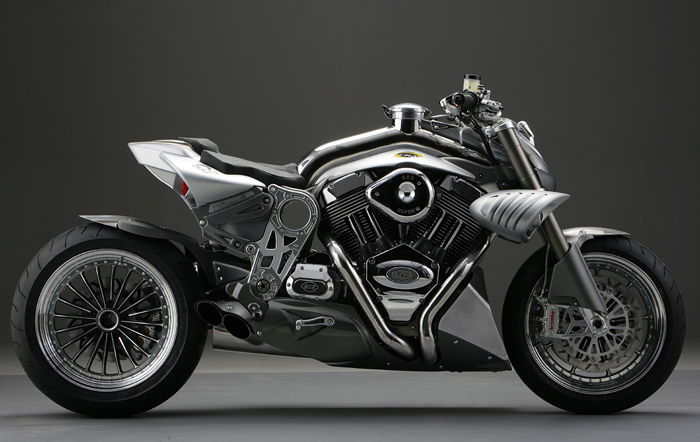 How DUU you do? As far as motorbikes go, this one’s about as subtle as an enema at a tea party
As a concept, the ‘DUU’ caused quite a stir when it was launched back at the 2009 EICMA. Now two years later and CR&S (Cafe Racers and Superbikes) are taking orders for this macho Italian. Thanks to the impressive write ups by moto journalists around the world, the entire 2011 production of 130 bikes have already been sold. So even if you had the $29,000 needed to buy the DUU, you would still have to wait till 2012. Now that price may sound steep for a production bike, but these are no ordinary plain Jane motorcycles. Each DUU is bespoke built to the buyers specifications in the small CR&S factory in Milan, Italy.

The bike’s engine isn’t one we come across too often in an Italian built frame. The Amercian 1916cc 50th anniversary X-wedge V-twin engine by S&S sits perfectly inside the CR&S sporty rolling chassis. “One look at the engine’s fins is enough to be seduced by such a pure shape, devoid of radiator. And for a lot of motorcycles fans, the air cooling system and the pushrod distribution are elements issued from a rich historical past” says CR&S. And if by that they mean that v-twins kick epic ass, then we’d have to wholeheartedly agree. The DUU’s styling couldn’t get any more masculine, unless you let Chuck Norris loose in their R&D department; we particularly love the fuel tank (16.5 liter) which is seamlessly built into the stunning frame. Another nice feature is the adjustable handlebars, footpegs and foot controls – which will appeal to many odd sized riders and those into getting their bike set up juuust right.

The CR&S DUU won’t be to everyones taste (and I’m sure the comments will highlight this), but there’s no denying the Italians have again created a truly unique beast that deserves the hype its created. For more pics and information visit the very manly CR&S website.