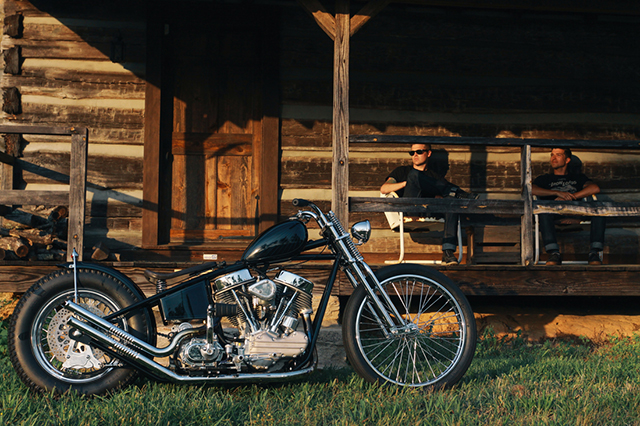 Story by Bill Bryant – from Issue Fifteen of Iron & Air.

Wisdom and timeless style generally evolve after decades of mistakes and missteps. The brothers Hindes of the Prism Motorcycle Company in North Carolina are overachievers in every sense of the word, and the depth of their work belies their age. In their mid-twenties, the duo have officially been in business for only two years, having already completed an impressive number of custom motorcycles and handmade parts.

Jake and Zach have skill-sets and accomplishments that many older men would be proud to have amassed. In addition to machine and sheet metal work, they’ve also spent time fabricating race cars while Jake’s mechanical engineering degree helps round them out. “I do feel we have both advantages and disadvantages due to our age and shop location. I feel we are looked down upon often when people find out we’re in our mid 20’s. I guess people don’t think you can be good at something at a young age,” Jake said without hesitation. “This just motivates us more to be better at our craft. What people may not be aware of is how much experience we have in working with metal and fabricating. We have been around some of the best fabricators in the world due to our location here in the Charlotte, NC, area. You have to think about all of the race shops that are around us. So for us, we grew up fabricating. “The unique thing about our shop and how we build bikes is the fact that we actually build a majority of the parts that go on our builds,” he continues. “Frames, front ends, tanks, oil bags, fenders, exhaust, etc. We make them all by hand in house at Prism. We didn’t know that was not the norm for a motorcycle shop.”

The bike featured here is their latest ground-up creation, built on the recent #BikerLive TV show on Discovery Channel. On the show, the Prism crew edged out two other shops in a social media-based viewer voting process. The TV angle isn’t really important to their story, but might be a sign that maybe, just maybe, the general public is moving away from God awful, OCC-style abominations and starting to appreciate classy, traditional-styled customs. With the artificial deadline created by the producers of about two months, the brothers had little time for procrastination or bad decisions and got down to the business of building a motorcycle from scratch. The frame was handcrafted in the Prism shop and mimics the stock geometry of a vintage Harley Davidson straight leg. Jake’s mechanical engineering degree and SolidWorks experience was put to use during design of the springer front end, and various models were tested and cycled through their paces virtually before the actual fork was built. The brothers built a long list of parts for the machine, including: frame, springer, tank, exhaust, bars, oil tank, air cleaner, and seat.

“We wanted to make a timeless, traditionally-styled chopper, and build as much of it by ourselves as possible. The springer may only have a couple inches of travel, but it works great and helps the bike have that old-fashioned feel when you ride it,” Jake explained. “The bike and rider are much more connected than something with plush suspension. That communicative feeling a bike like this delivers is like a time machine, giving a contemporary rider an experience shared with generations long gone.” This seemingly timeless old motorcycle does feature some modern conveniences, including an electric start, a 5-speed transmission, and a 103” S&S panhead engine. No clapped-out, low-compression 74-inch motor here; this is a modern wolf in sheep’s clothing. The electric foot makes starting it easier. These were requests made by the bike’s owner Tim Clark, who commissioned Prism to build it long before the TV guys came around. Jake and Zach are cool with it and believe if the electric starter makes it more enjoyable for its owner, why not? Another local artisan who pitched in was the Hindes brothers’ buddy Porkchop, who did the flawless paint that is flashy enough to be interesting but low-key and classy at the same time. As always, nothing is done alone, and the Prism guys thank their friends who helped out along the way: Andy Williamson from Refuel Motor Culture, Peter Matofy, Randy Rollins, Derek Fearheiley, and Josh Jennings. Charlotte, North Carolina, might not be on the chopper world’s radar yet, but it’s on its way. Having solid, young builders with a passion for doing things themselves and doing it right is a good start, and we look forward to watching Prism lead the way.

Iron & Air have offered Pipeburn readers $10 off a subscription. Just punch in the code ‘PIPEBURN’ here.