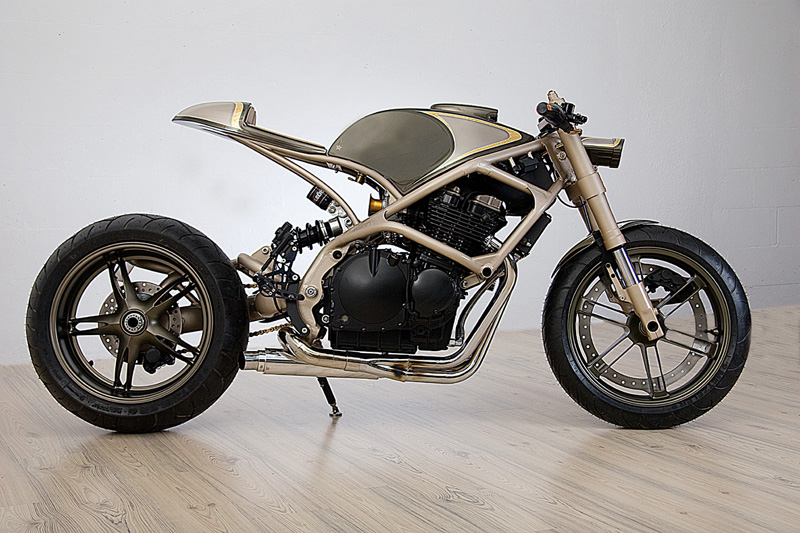 When Wolfgang Baetz sold his personal ride there was only one thing he could do. Build a better bike. You see, Wolfgang is the owner of Custom Wolf in Bavaria and has been building bikes for over 20 years. His personal ride was a show stopping GSXR called Golden Brown Rough – which he only sold because someone made him an offer he couldn’t refuse. Although building a better bike was never going to be easy. Then he came across something special. An original Moto Martin frame in the far north of Germany to use with Suzuki GSX engines. He knew it was the perfect find for his latest project.

Only the frame wasn’t quite right and the components provided didn’t fit well. After redesigning the rear frame and adding a Ducati single sided swing arm, the problems were solved. The engine was made from a completely new Old School Superbikes 1230cc GSX 1135 motor. With a curb weight of about 190 kg, and an output of 155 hp at the rear, this bike packs a punch.

Over a 10 month period, Wolfgang and his team pretty much custom made everything on this modern café racer, including the fenders, exhaust, handlebars, the beautiful tank and seat. The bike is aptly named “Scoop” because of the air inlet on the tank – taking inspiration from old American muscle cars. As a joke the Scoop folds up and then releases the gas cap. All the electricals are under the tank, for a really clean look. Austrian Marcus Pfeil finished the bike in an unusual paint combination – which looks like it came right out of ‘Operation Desert Storm’.

Even if you’re not into sports bikes, you have to agree that the attention to detail, craftsmanship and styling are second to none – the kind of work you might expect from a German builder.