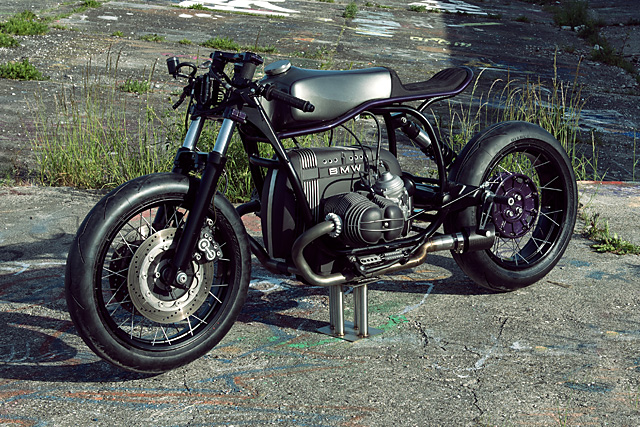 If there’s one shop that has stood head and shoulders above all others in 2016, it would have to be Munich’s Diamond Atelier. Their plethora of 2016 builds, including the jaw dropping ‘DA#4’ we featured in April, have shone bright across the scene. And although they would be well within their right to rest on their laurels, they have yet another brand new bike to show us. So here’s Diamond Atelier’s Tom Konecny to tell us about this, their amazing ‘DA#7’ BMW R100R, in his own words. As some Pipeburn readers would already know, Diamond Atelier has done quite a few custom BMWs before. So we were a little afraid of becoming too repetitive. Be it due to the current saturation of custom 2-valve boxers, or our urge to make every bike we build ‘our best so far’, we always like to stay inventive. But before we get into the details of the build, I’ll let you in on a little secret. When you’re first starting a build, it is all about collecting ideas and trying to figure out which direction to go. And as is the nature of good-looking motorcycles, not all the ideas that pop into your head will work well together. This means I end up using only about 20% of the ideas that I initially have when first thinking of a new build. But it also means that 80% of the ideas are being stored in a drawer just waiting to be made into reality. This is what the DA#7 was for us; a build on which we could use some of these cool but unseen ideas, and make sure that they didn’t go to waste. Needless to say, this called for a customer who trusted us with such a project. So when I received a phone call from a passionate motorhead whose only real requirement was to have a boxer engine, we knew the time was right. After meeting up and discussing the essentials like preferred riding locations and body measurements, we went ahead and sourced the donor bike. It’s one that is very well-known to us, since it is the same bike we used for our DA#3 and DA#6 builds; a BMW R100R.

Due to our experience with this specific model, we didn’t lose any time with solving technical issues and could fully focus on the creative side of the build. A complete engine rebuild was first on the list to make sure we had a solid foundation to start with. Since the bike would be delivered to a country with close to no technical restrictions on motorcycles, we were free to realize many ideas which would be impossible in Germany, due to our strict TÜV regulations. The first task we tackled was to create a completely original tank & seat combination. For this we used a mid 70s trials bike gas tank and then built a rear frame loop from one piece of tubing which wraps tightly around it. We also wanted to create a super slim seat, but still make it comfortable for longer trips. The solution was to place the seat within the frame loop so the actual thickness of the seat would be hidden by the tubes of the frame, making only the uppermost surface visible from the side. Up front we rebuilt and lowered the forks so, together with the brand new and custom-built wheels, the chassis is set for increased performance. This is helped along by the Pirelli Diablo Supercorsa SP2 tires that can almost redefine the laws of physics when pushed hard enough. As always, we made a completely new custom wiring harness, which was especially tricky due to the tiny gas tank we had to fit on top of it. Together with our signature battery packs that we managed to neatly hide, the bike is fully functioning without a kick starter. The headlight uses extremely bright LED technology that allowed us to go with a very small unit, the Kellermann BL2000 Dark indicators are located in the handlebars and we ran with a tiny rear light strip for the brakes. But on this bike it is more about what you can’t see than what you can. A minimalistic floating rear frame, neatly hidden throttle lines and ignition cables disappearing into the engine block all add to the bike’s clean look. To keep the cockpit as clean as possible, we stuck the tacho right onto the gearbox and made sure there were no unnecessary buttons or switches crowding the rider’s view. The only thing that should be seen, though, is the obligatory Diamond Atelier serial number and the authentic 0.17 carat diamond that we set into the CNC-machined upper triple clamp. Next, all the bike’s surfaces were made to look and feel brand new. Everything that is black was coated in multiple layers of high quality powdercoating to avoid paint chips when riding. The engine received our very own uniquely formulated high temperature color coating, and all other pieces were either sand blasted or polished to perfection. The metallic silver and candy purple are hand-mixed colors, which means that they are unique and not reproducible – even for us. Overall, this bike has a very special appeal for us. We were able to be extremely free in the creative process, which I believe is always necessary in order to create something truly out of the norm. I’m not sure we can declare this build ‘our best so far’ just yet, mainly because the approach was just so different to all of our other projects. In a way, it’s really not comparable. It has its own league. But what I am sure about is that our drawers will fill up with unused ideas over the next few builds and again these ideas will be turned into a bike just like DA#7. Maybe that’s when we can start comparing… so stay tuned.