When the custom culture began to boom again a decade ago there was a large element made up of middle-aged men rebuying the bikes of their youth and younger folks taking advantage of cheap and cheerful ’70s machines. Fast forward to 2020 and there is a new generation of builders who grew up with this culture inspiring their teenage minds and a select few have gone on to become the elite builders of today. Jody Millhouse is one such man, exploding onto the scene with an incredible catalogue of custom creations. The latest from the Thornton Hundred Motorcycles workshop is this celebrity commissioned Triumph T120 Ace, with bulk attitude to burn. 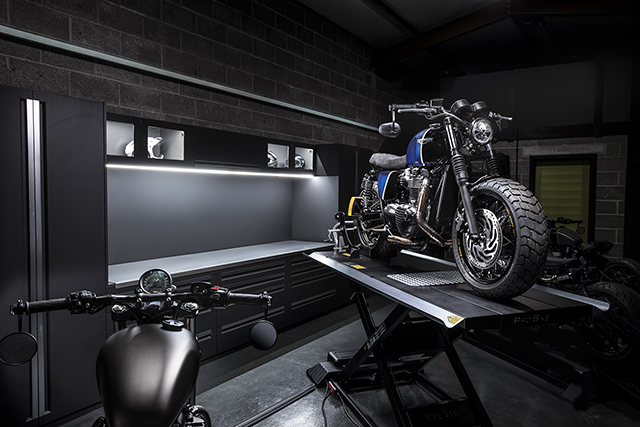 While most of us spend our early twenties stumbling around trying to find our place in the world, traveling, dropping in and out of uni or giving a trade a go. Jody clearly knew exactly where his future lay and was producing incredible creations at just 21 years old. Still in his early 20s, he’s already wowed the scene with bikes as diverse as a Honda CR500 tracker to a Ducati Panigale with plenty of 3D printed parts. So it’s little wonder then that Joe Wicks, TV presenter and Social Media star of the fitness industry should come calling, wanting a Millhouse machine of his own. 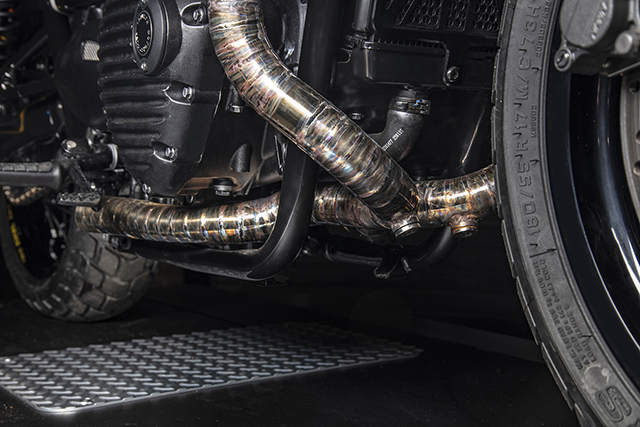 The Body Coach as he is known, had his eye on the Triumph and clearly wasn’t interested in blending in with the crowd. “Joe wanted to build the coolest T120 custom on the planet after lusting for the bike and not finding much inspiration from already completed builds,” Jody tells us. And in Millhouse he found the man with all the skills to bring to life a motorcycle like no other, built to incredibly high standards. Located in Milton Keynes, Jody has just moved Thornton Hundred into a new shop and surrounded by half the teams from the Formula 1 paddock, it’s the perfect place to shine. 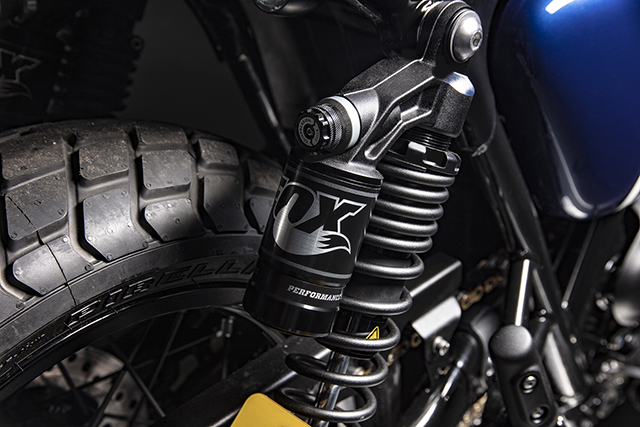 Starting with a 2020 Triumph T120 Ace provides a base for a build that is quality from top to bottom. But with those traditional Bonneville lines, while stunning for a factory bike, they’re still all too easy to get you lost in the crowd and they definitely don’t pack much in the way of on-road presence. Enter Jody’s wide wheel conversion kit and yes, that is a 180 section tyre on the front, with the tread showing off its mean intent. But it’s no slap together job, with Thornton Hundred using the latest in CAD and CAM manufacturing technology to create this incredible design. 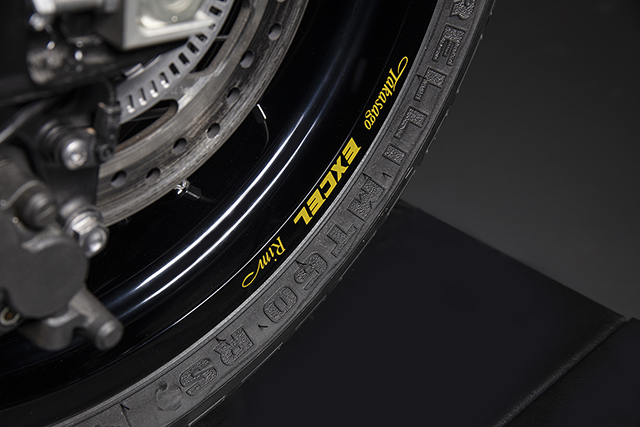 Spreading the factory KYB cartridge forks apart is a set of custom made triple clamps to create the room for that tyre. The next step in the process is Jody’s own CNC’d hubs, which are simply a work of art, with the shop logo and the client’s name engraved on the inside. At each end these are then laced up with quality black spokes to a set of lightweight Excel rims, that help pare back some of the unsprung weight. Before they’re all wrapped up in the enormous Pirelli MT60 RS tyres, measuring a car crushing 180/55/17. 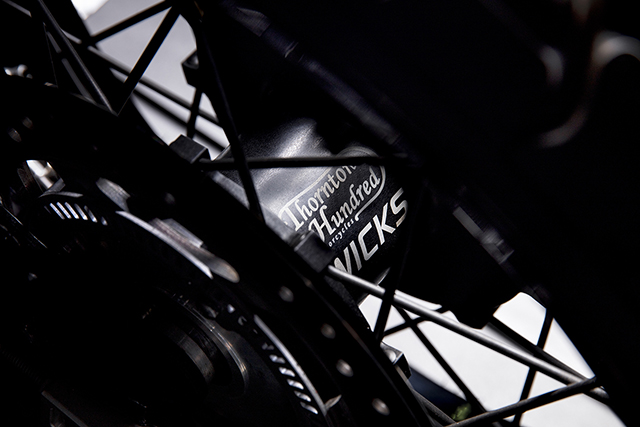 But while they dominate the show, the rest of the build is no less impressive. Take the custom front guard, the small chopped down unit might look like any other from a distance. But get up close and the individual mounts are a work of art in metal fab form. Above, the black ringed Triumph Bobber headlight conversion adds to the badass feel while retaining factory quality and the gaiters limit the amount of chrome on display. With the rear suspension going all black too thanks to a set of high-end Fox shocks giving full adjustability to set the bike up perfectly to Joe’s liking. 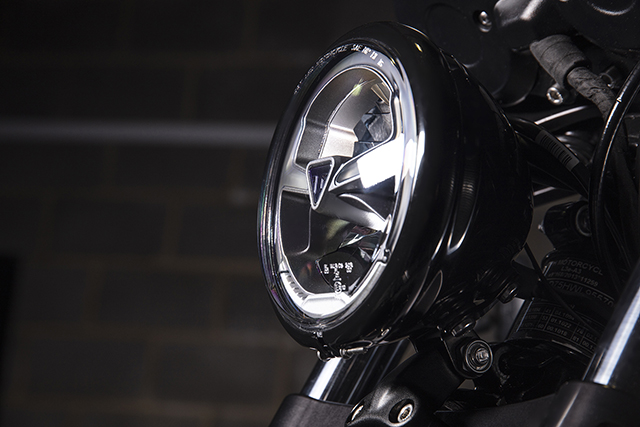 Bringing a little colour to the party the paint is all done in house and the black and blue finish with custom stripe and re-designed badging has the tank and side covers popping from miles away! At the rear the quality continues and the seat base is shaped from carbon fibre no less, with an all-new custom subframe loom. Up top the upholstery is first class, with Jody finally letting someone else touch the bike with the good folks at Viking Motorcycle Seats cooking up an Alcantara special with matching blue and white diamond stitching. 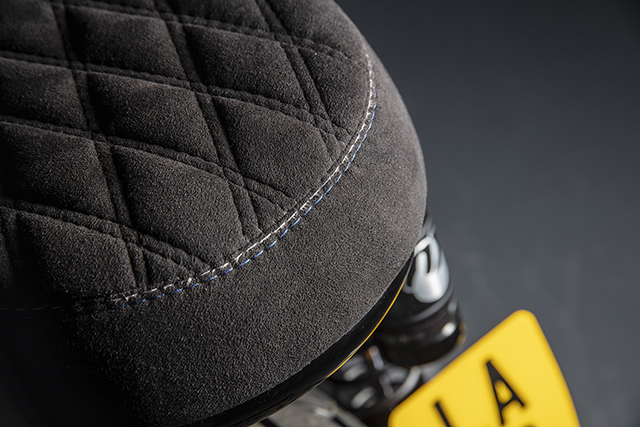 The big twin-cylinder 1200cc engine packs plenty of grunt and now looks the part with a set of side covers that add to the mean motorcycle aesthetic. But once again the platform offers up a chance for Jody to show off his incredible skills and there are few who can match him in the exhaust department. Anyone who watches his Instagram stories will know the hundreds of pie cuts and nearly as many hours that go into crafting such a masterpiece, with the welding talent truly defying his young age. The sound is just as impressive and from concept to completed product it’s little wonder that those who could have any bike of their choosing turn to Thornton Hundred Motorcycles for their own slice of nirvana on two wheels! 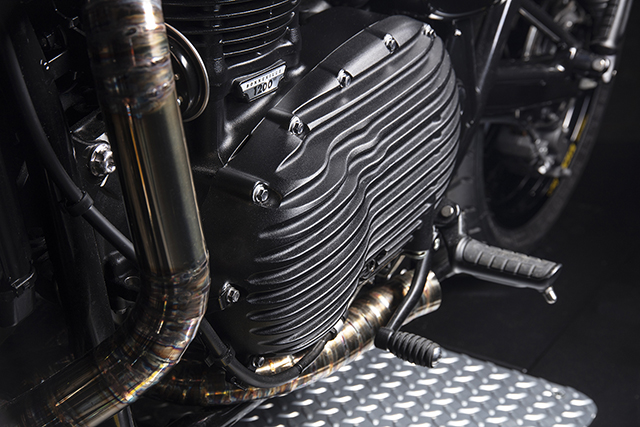 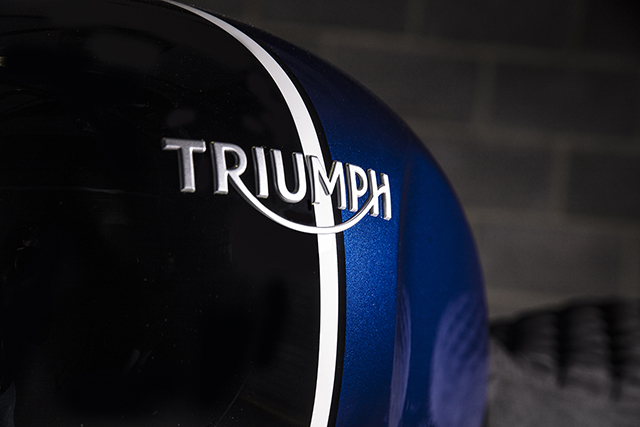 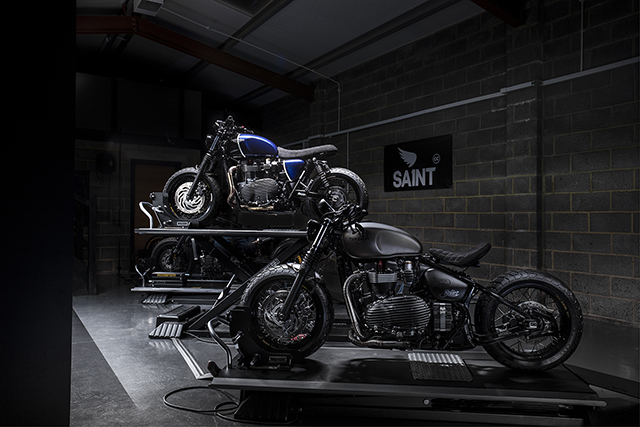