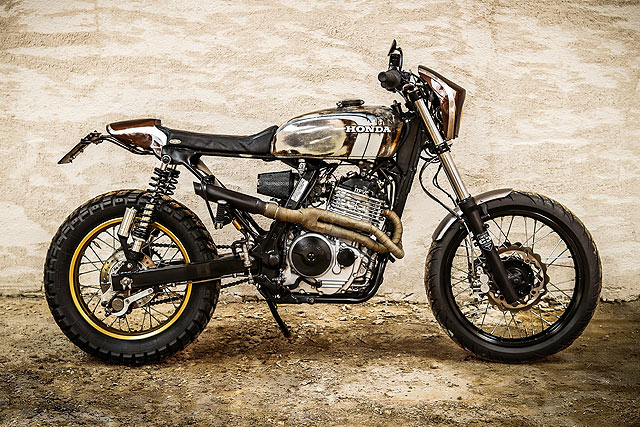 The last time we visited Dopz & Schizzo from Italy’s Emporio Elaborazioni Meccaniche, they’d just finished up their Daft Punk tribute bike for Sky TV’s “Lord of the Bikes” show. And while their names might sound more like incidental characters from an episode of Happy Days, they clearly have a little more rebelliousness in them than we may have previously realised. How so? Well, from punks of a musical kind, they have now shifted their focus to some punks of a more mobile nature. Specifically, a Roman skater who’s clearly feeling he has two too many wheels. Here’s the bike they build for him – a Honda Dominator they call ‘Dardo IV’. The fourth instalment in their ‘Dardo’ series of builds, the bike follows on from its predecessors by being based on a Honda mono, but with an interesting twist on its own particular influences. The mono in question here is in fact a ‘91 Dominator. And as for the style? “It’s a bit cafe, a bit scrambler, and a bit street tracker,” say the boys. The owner, a well-known Roman skater, was looking for something that was both elegant but with a dollop of skater-ish street style thrown in for good measure. Their first port of call? Ditching that nasty-looking factory Dominator tank. Intrigued by a spare that had been kicking around in their shop without a place to go, Emporio took the design brief directly from the tank’s patina. Sanding it back and giving it a coat of high-gloss clear, it was to become the jewel by which the boys would illuminate the rest of the bike’s nifty custom details. Then things started to get serious. Angle grinder serious. The rear frame was completely rebuilt to fit a couple of new shockers and to improve the thing’s look and feel. And the fact that it also made the bike lower didn’t hurt things, either. But it was a decision that wasn’t without consequences –  to make it possible, the boys had to shift the brake to the underside of the rear swing arm. Then to finish the out back bits off properly, a handcrafted tail unit was designed to mix up the styles as Emporio always loves to do.

Up font, and the forks are a mix of Transalp, Dominator and SV tubes. And while the combination might seem more like the dabbling of a mad man with a hoarding problem, there was actually reason behind the metallic collage. “There were traits of all three forks that we wanted for the finished bike. Put simply, it was to give the bike dual front discs and a lower front fork than on the donor bike for a perfect riding position.” The scrambler’s entire wiring loom was redone from scratch, and while the process was probably as painful as it always is, a pleasant out was the realisation that the new battery would actually fit in behind the rear fork’s pivot point. And while you’re looking to see where it resides, pay close attention to the many small details that make the Honda really bitchin’. There’s the small wrench used as an oil reservoir. A fork wrench that’s used to support the rear brake. Footrests that are made from an old chain, and the piston-covered key start was a spare from another Guzzi V7 they got their hand on during the shooting of the aforementioned TV show. Nothing like a bit of recycling, yeah? The finals touches involved polishing up the bike’s sensory aesthetics. A hand-crafted 2-into-1 exhaust pipe with some nifty front plats not only looks the shiz but also gives the bike it’s much-improved sound, one which Dopz & Schizzo describe as being like a ‘650cc city mosquito.” Nice description, we think. Finally, the gorgeous bronze paint was sprayed liberally. It’s a delicious-looking golden brass shade painted by local spray masters, E!Design. While massaging their collective temples, the boys recounted the build’s main challenge. “The customer was very keen to make the scrambler lower, add two rear shocks and to have a straight line from under the tank to the rear cowl.” Naturally, they agreed. But as always, it’s the little things that you agree to without batting an eyelid that really get you in the end. As always, we asked the team what they like the best about the finished bike. “It might sound a little weird, but we really like how the Honda encourages you to ride it. There’s just something about it that makes you take it easy and be quite light with your inputs. It’s really fun, actually.” What a skater would want with a bike that encourages you to take it easy, we really don’t know. Hopefully he’ll get bored with it and we can make the boys an offer. Until then, we’ll just be here, drooling.