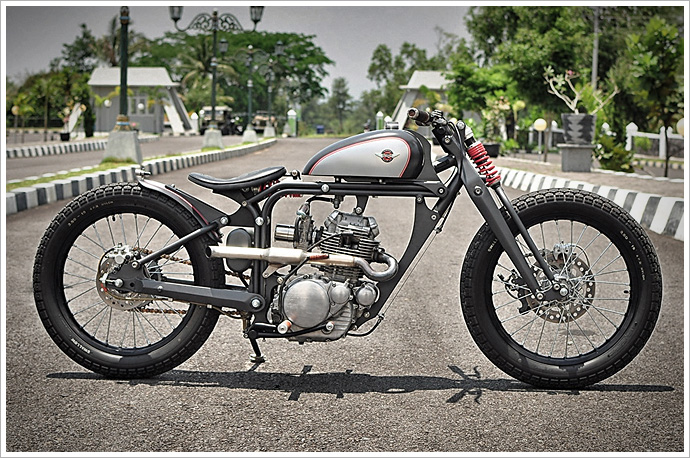 The miracle of flight is a pretty amazing thing when you stop and think about it. Sure, your average bird makes it look incredibly simple and beautifully effortless, but when you really look into what’s going on to keep it suspended up in the wide blue yonder, it’s nothing short of breathtaking. Which brings us to the bike du jour, Darizt Design’s ‘Elang Langit,’ or Sky Hawk. As the name indicates, the bike also manages to look both effortless and simple while hiding a plethora of beautiful details that reveal themselves like bolts from the blue to those who are keen of eye. Here’s Agus, boss man and founder of Darizt. “Early on, the owner gave the bike the name ‘Elang Langit,’ meaning ‘Sky Hawk’ or ‘Osprey’ in Indonesian. He wanted something truly unique, and so we agreed to do a full build from the ground up.” “The engine is from ’81 Kawasaki KZ 200, which is a favourite of ours, but we bored it out to 250 cc. Pretty much everything else including the frame, front springer, swing arm and linkage, gas tank, seat, fender, foot and forward controls, handle bar, exhaust pipe, as well as the paint are unique and homemade by DariztDesign.” “We went with no battery this time; the box under the seat is for CDI and the ignition key. The rear lamp is made from a used spark plug and the LED light inside is from a lighter (no, I don’t understand it either – Andrew) and it’s powered by small watch battery. To finish things off we added a nice set of bicycle handgrips in leather.”