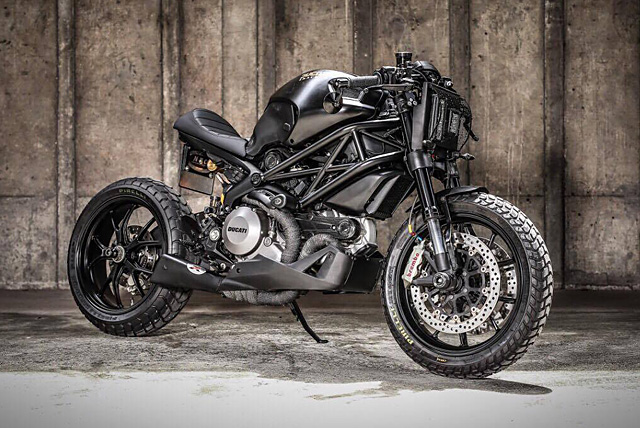 The motorcycle industry is booming in Thailand with all the major Japanese manufacturers having a large presence and the Europeans have followed in recent years. With the world’s largest markets on its doorstep Thailand is the perfect place to build and assemble many of the models on offer in the global marketplace. But with this boom attention has also be turned to the local custom bike scene and in the spotlight is the country’s biggest player, K-Speed Customs, with 12 locations across the country. Overseen by head honcho Eak they come with a penchant for the dark side and most of his bikes are finished in Matte Black with a sinister appeal. So it’s no surprise that when he combined forces with one of his shop owners to come up with a new build the end result is this murdered out Ducati Monster M1100 known as “Darth Mostro”. The name is derived from the Sith Lords of the Star Wars franchise and the Italian word for monster and when your aim is to roll with a pack of blacked out beasts and turn to the dark side with Emperor Eak it doesn’t get much more fitting than that. “The owner of “Darth Mostro” is Mr. Montree Pornkiattichai or “M”, he is owner of K-Speed Ladkrabang one of our 12 branches around Thailand, his shop is located in the eastern suburbs of Bangkok,” explains Eak. Having been inspired by the work of Eak that has become so popular it’s been featured in global men’s magazine Maxim, M wanted to take on his first full custom build. This particular Monster he’s owned and ridden for three years but being a major cog in the wheel at K-Speed he couldn’t keep it stock any longer. A Ducati is a hell of a bike to cut up, they’re not cheap in Thailand and they hold their value well but when the force is strong the angle grinder gets spinning. The first step was to remove the stock seat and tail section and cut straight through the pristine Italian steel. Always riding alone M had no concern about making the Monster a solo and the way the new design exposes the rear wheel helps to create a completely new look. With the subframe capped and cleaned up a new seat needed to be designed that would mate up to the unusual shape of the Monster tank and yet still work with the overall visual theme. K-Speed have nailed it with a neo cafe racer design, using small rear hump, frame hugging lines and finished in quality black leather. With the eye now drawn closer to the centre of the bike the look is accentuated with a custom-made belly pan that has all the right angles to create a mean look compared to the more typical smoothed out Ducati. It’s a theme K-Speed use to give a lot of their bikes a feeling of mass centralisation, often helping small engined machines look tougher than they are; on the already bruisingly badass Monster it’s brilliant in its brutality. For M the decision to leave the stock tank in place was an easy one, not much if anything else fits, the complexity of the frame is a hindrance and the in-tank fuel injection accessories make it even more difficult. So to give a subtle custom touch the factory tank coverings have the usually shielded openings removed to allow more of the engine and airbox to be on display. To finish out the look there was no way that Ducati’s smooth and stylish single headlight could stay, so a little Mad Max was brought to the party “I mixed up two styles and blended to this bike, I don’t want to use round headlight so I try to use asymmetrical style and play with LED lights and cover with a metal grille.” It gives the Monster a sinister front-on appearance, that rolling amongst the 50cc commuter bikes of the Bangkok streets must make it look like M just escaped a post-apocalyptic battle of epic proportions. When the M1100 came to market one of the selling points was that it was a big capacity Ducati without the weight of the other litre plus bikes. Now that M had stripped even more off the factory 168kg machine there was no point stopping until only the essentials remained. A small front fender was made that replaces the stock item that is not exactly huge to begin with. More factory metal work was then stripped away with the passenger pegs and their oversized supports removed and as they also form the support of the rider’s pegs these have then been replaced with new units and blacked out heel guards. A new grill was added for the oil cooler before all the custom body work and many of the accessories were coated in the K-Speed signature Matte Black, no Rosso Corsa here! To finish off the look the tank was then given new decals in the vintage styling of the ’70s Ducati logo applied in the famous gold of the 900ss. The Monster might now be lightweight but what really gets it ready to rumble is the exceptional 1078cc L-Twin with Superbike derived vacuum die-cast crankcases for another 3kg in weight saving. The air-cooled lump utilises Ducati’s tried and true 2 valve desmodromic heads but got an all new Siemens ECU to provide for wickedly sharp throttle response. To pull some extra ponies from the strictly air/oil cooled machine M added a full IXIL exhaust system, but where most finish out at the tail, this stumpy machine now uses less of the pipework to position the unique muffler under the rider’s right footpeg. If you’re not enjoying the snap, crackle and pop of the Desmo engine then for the M1100 Ducati brought back a full dry clutch with hydraulic application for that race bike sound and feel that always brings a unique look at the traffic lights; although I’m sure the clutch is the last thing on their mind when “Darth Mostro” pulls alongside. When it comes to suspension and brakes the M1100 is a seriously impressive piece of kit, but K-Speed sell a huge range of custom parts and M wasn’t going to settle for anything but the very best. The fully adjustable 43mm front forks from Showa remain in place but steering is now done thanks to a racey set of clip-ons that do away with the stock bars and risers. But its what’s at the bottom of the now blacked out Showa’s that makes a mark, the 4 piston calipers are gone and in their place is the enormous stopping power of M4 Brembo monoblocks grabbing 320mm twin discs. With such a light bike and big brakes on board rear wheel control needs to be tuneable and nothing does a better job at that than a fully adjustable Ohlins rear shock with remote reservoir replacing the stock unit. The beautiful lightweight Y spoked alloy wheels remain as standard but the trusty K-Speed supply of Matte Black gives them an all new look and wrapped in Pirelli MT60 RS Corsa’s, “It gives this bike a look like a beast from hell.” Having spent a small fortune on an already expensive bike and loving to ride it hard even in the crowded streets, M made the very wise decision of fitting up R&G crash protection at both ends of the bike and a middle frame slider as well. The new bars feature underhung mirrors that do their job while blending in to the black background and a CNC clutch slave now takes pride of place. Everything else on the bars has been changed out for black items including the adjustable levers and even the fluid reservoirs are now a dark tint. All that was left to do was add the rear number plate and saddle up and ride. For M “I like everything about this bike, because it’s made from my determination and there’s only one.” On its own “Darth Mostro” is an intimidating machine but riding shot-gun with a bunch of other sinister K-Speed creations you have to feel a little sorry for any motorist who sees them with a quick glimpse in the mirror. It’s not that they want to cause old ladies to have a heart attack; it’s just for K-Speed “Black is in our DNA”.