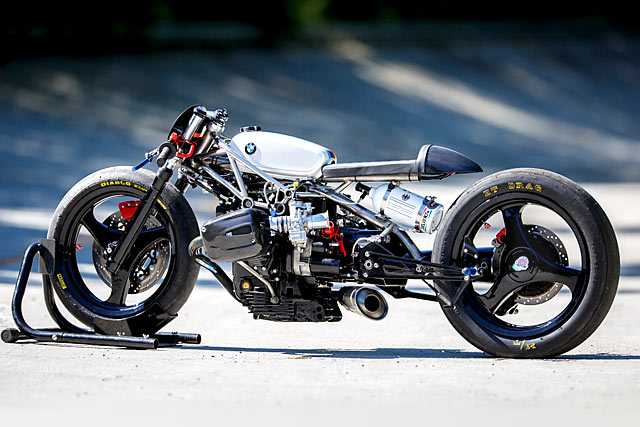 The rise and rise of the Sultans of Sprint and eighth mile sprint racing in Europe has proved a real goldmine for those of us interested in custom drag bikes. Shops from all across Germany, Switzerland, France and Italy are now feverishly building bigger and better bikes while drafting increasingly skilled riders to see if they can’t make it to the top of this new league. One such hive of speed is South German shop Kraftstoffschmiede, owned and run by Philipp Ludwig. And this lower-than-low Beemer beast is his latest masterful creation. Phil’s apparently been interested in modifying things since a very young age. “It started with my Grandmother’s sewing machine. My Grandpa wasn’t too excited about my early customisation efforts, but in later years I think he was quite surprised by my ability to modify bicycles, then mopeds and eventually cars. He always supported me, too.” Clearly, this wasn’t just a passing fad, as Phil now works as an Engineer for BMW in its vehicle development department. Nice gig, Phil. ‘Kraftstoffschmiede’ (or ‘Fuelsmith’ in English) was created in 2002. Phil started by restoring vintage BMWs, but now he just focuses on customs. “Since this is not my main profession, I just work on projects that I am passionate about and I am quite happy that I don’t have to do it to generate an income. Maybe it’s one of the reasons why I am having so much fun doing it. While others might enjoy themselves relaxing in front of the TV after work, I prefer to go into my garage and create things.”

In an unusual choice of donor bikes, the basis of this build was a 1998 BMW R850R. If a mental picture of the bike doesn’t come to mind, just think nondescript BMW all-rounder with a telelever front. “Inspiration for me was to build a BMW four valve racing engine, as the used prices for the two valve BMW bikes had risen quite a bit, while the 4v models were still very affordable.”

Phil’s quick to point out that he finds the 4v engine and drive train of this model quite beautiful and we aren’t going to be the ones to disagree. So to gild this particular lily, he found some very slim components from the vintage German motorcycle brand ‘Hercules’. “I’ve had this super slim seat on my shelf for a long time, and my idea was to create a motorcycle that looks extremely slim; a bike where the seat has the same dimensions as the tire.” So with the slim seat and the massive boxer engine, Phil took his inspiration and got to work. Three months later and presto changeo…

“The design fundamentals of the BMW started in my head: a low center of gravity and a weight distribution of 2/3 front to 1/3 back so there’d be no chance of any accidental wheelies during a race.” The bike’s footpegs are positioned in the centre of gravity, so that the rider’s weight rests right on it. “Thankfully, my design worked from the outset, probably because I’ve spent a lot of time creating frames in the past.”

Phil notes that the frame was the most difficult thing to make for the racer, mainly because the details only existed as ideas in his head. “I managed to create it from scratch with the help of my friend, Franz. It is light, but it’s also very stiff and it has the best possible steering angle.” Basically, it did exactly what he wanted it to do; go really fast with 100% directional stability. “To me, the highlights of the bike are the classic BMW racing colours, its very slim design and the oversized engine. Also, the acceleration of this bike is insane. I was pleasantly  surprised to find that the engine’s performance has doubled after testing it on the dyno.” After a quick Google, we’re guessing a cool 140 horses at the rear wheel. Giddy up. We asked Phil what was next. “I already have an idea for a new project,” he said. When quizzed, he was rather tight-lipped. “You’ll just have to stay tuned to find out.” Trust us Phil – we’re definitely not changing the channel. Not at all.