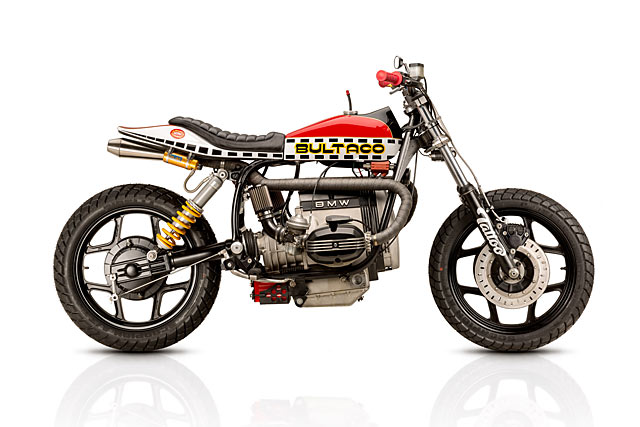 This old 1986 BMW R80RS has had four iterations. In its original form it was a tourer, designed to ferry middle-aged German men to Paris for wine tasting, to Madrid for lunch, or Kiev for sex tourism. Then Tattoo Customs got their grubby hands on it, stripped it back, painted it black and stuck Firestones on it, dubbing it a mixture of a cafe racer and a bratstyle bike – a ‘Brafe’. But the Firestones went all Firestoney and dumped the bike onto the road. So the third model was born: a nose down cafe racer with a psychedelic paint scheme. And now it’s been changed again – this time into knockout Bultaco-inspired flat tracker. Fourth time’s a charm. [superquote]“The Six Day Matador – named after an endurance race, but more likely named after the lifespan of its ignition system”[/superquote]

Few outside the grumbling VMX crowd have any idea who Bultaco were. But in the 70’s, if you were after a nimble, lightweight, and wholly unreliable two-stroke you couldn’t go past the Spanish marque. The firm prided itself on bikes like the Six Day Matador – ostensibly named after an endurance race, but more likely named after the lifespan of its ignition system. They also peddled the gorgeous little Metralla cafe racer and the trials Sherpa bike. And then there was the upright Astro flat tracker. Which was especially appealing to the guys at Tattoo Customs. Appealing, because the psychedelic cafe racer R80 was bloody uncomfortable. ‘The last iteration of the bike kicked the ass of anyone who rode it,’ Rudy Banny, head of Tattoo recalls. ‘High seat and low bars equals a sore neck!’ And they want to make bikes that people not only admire, but ride. ‘We take pride in building kickass looking bikes that are intended to be ridden daily.’ Swinging past the osteopath can really slow down your progress on a weekend scratch, so the team looked to another type of build for inspiration. Flat trackers. ‘We love them,’ Rudy adds. ‘The roar of a pack of thumpers tearing up a track. The slimmed down, fat-tired look of a flat-tracker.’ Thankfully, a lot of the hard work was already done when Tattoo had the bike apart for the cafe’d ‘Be Good – Be Gone’ build. The frame was already trimmed and coated, it had new suspension on the front and rear, and high-mounted header pipes ending in reverse megaphones from Dime City Cycles. But the standard tank and seating arrangement weren’t conducive to a tracker build. The new fibreglass tank and seat were taken straight from the flyweight Astro so obviously it wasn’t going to slot right onto the R80, a bike around twenty times bigger than the ‘Bully’. So the team started off by shortening the frame even more. They fabricated a new subframe and cut back the seat section by four inches, with the rear loop pinched in so the tail didn’t hang too far over the rear tyre. And hey presto – the fibreglass sat neatly on top. Up front, the team opted to avoid the headlight-in-the-number-plate look, which is as clichéd as the ‘photo-of-guy-in-flannelette-shirt-and-open-face-riding-around-a-muddy-field’ when it comes to tracker builds. Instead they snuck in a little light under the bottom triple clamp, allowing the number plate to remain as flat as an olympic swimmer’s chest.

[superquote]“a smartphone mount that allows the rider to figure out his speed, his direction or just making sure he’s never more than 500 meters from a gas pump.”[/superquote] The controls are kept simple, but on the question of gauges Rudy replies, ‘Speedo? We don’t need no stinkin’ speedo! This is 2017 and there’s an app for that!’ Instead there’s a smartphone mount that allows the rider to figure out his speed, his direction or just making sure he’s never more than 500 meters from a gas pump. One of the shining parts of the build, both literally and figuratively, is the paint job. Laid down by Donald from Dee Gainey’s, the original Bultaco livery pops right out and looks stunning against the finish of the engine and rims. On top of the seat pan sits a custom tuck and roll seat completed by Larson Upholstery. Down below the bike wears Pirelli Scorpions, helping give the bike a heavy-footed tracker look. It all helps to bring together a curious mix of BMW tourer and Spanish flat tracker that just somehow works. It looks like a legitimate, snarling bike headed for a dirt meet. And Rudy is quick to head off any questions about where it’s going. ‘No, we haven’t had it out on the track yet,’ he says. ‘But you can bet your ass we will.’