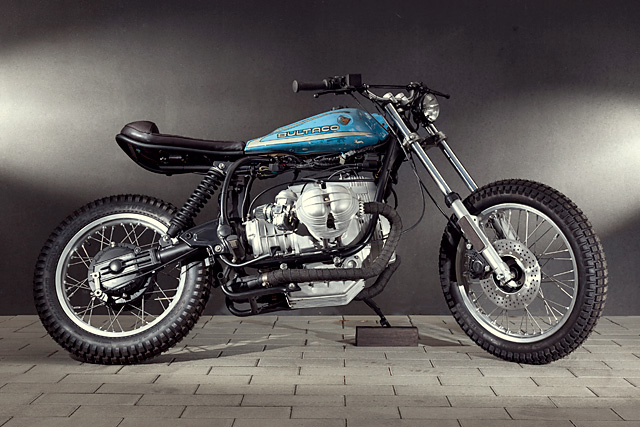 In the quiet German city of Oldenburg a highly skilled carpenter whittles away his days designing and crafting the finest furniture from timbers gathered from the local oak forests. But by night a darker side comes out to play, the chisel and mallet swapped for the tools of a blacksmith, here the carpenter turns motorcycle builder creating minimalist machines with the single purpose of carving up those same forests in a totally different way. Meet Marcel Papenberg who’s turned his passion and skill for motorcycle building into a second business, Box-Werk Custombikes, run in his spare time producing purposeful BMW’s from a collection of tired old machines just waiting to be restored. In January this year Marcel picked up this 1983 BMW R80ST looking like an old “ugly duck” that in years gone by had served as a steed for the local law enforcement. Given that Marcel’s desire was to create a truly effective Scrambler the 80ST makes a whole lot more sense than many of its siblings from the all popular R series. It has all the torque you could want or need in such a machine with far less weight bringing it much closer to its British and Japanese rivals, “Kerbside, BMW’s ST would pass as a 500 in size, slim and neatly turned out” Motorcycle Sport observed at the release. But Marcel still had a lot more weight to save and it all started when he found the tank that now calls the backbone of the BMW home. Taken from a Bultaco Alpina 250 the legendary off-road marques tank surprisingly fits up well to the big German but it wasn’t ever going to be as simple as just the fit. To start with the glass tank with its heavy “patina” was less than satisfactory inside and cleaning a fibreglass tank that has deteriorated that badly inside is less than fun with plenty of needle like pricks to the fingers removing gummy fuel. With a seal kit run through it the tank holds fuel like the day it was made, with a new petcock, filter and lines designed to work with the BMW arrangement. Marcel worked to get the small 250 tank to fit down nice and low and cover as much of the electricals as was humanely possible with such a tiny unit. But the outside of the tank is left completely as it was found, with all its motocross and trials battle scars, faded paint and vintage Bultaco graphics it’s not something you ever thought you’d see on a BMW. Knowing he had a tank that would work the standard item was put aside for another day and the bike stripped back for further fabrication. The long and weighty steel seat and subframe have been removed and in their place a new simplified subframe with a bubble back welded in place. It’s not a feature you immediately notice but one Marcel spent considerable timing crafting as he wanted the subframe rails to match the seat he had in mind. “I made stencils for the rear frame, up, down, up, down, other, welding, adjust turn, is important to me to continue the lines of the tank and let be harmonious, it should look as if it belonged always so. The process of the rear frame was most intense of all components.” Over the top of the metal work a piece of flexible plywood was laid down to form the base of the seat and then cut to perfectly mirror the new steel. The base was built up with foam to form the shape, slim waist/big butt, before being covered in dark brown vintage Nappa leather by fellow craftsman and friend Albert. With the tank and seat combo now giving a true Scrambler feel with some vintage comfort the frame could be torn down for the final time. Sandblasted to remove all the crap it had collected over the years it was then sanded back before being given a coat of black powder coat along with the swingarm, upper tree and rear shock.

That rear shock is the 80ST specific unit that acts directly on the frame for greater feel, is shorter than the all-purpose GS design and provides the perfect level of absorption and rebound for a machine equipped with aggressive rubber designed not to bottom out on even the roughest of trails. But up front is where Marcel has made the big suspension changes with the conventional telescopic forks completely overhauled to give a ride capable of tackling just about any terrain. To accommodate the springs and raise the front end the stanchions have been extended by 60mm with the beefy ST lower tree doing the bulk of the clamping. Keeping unsprung weight down on lengthy shocks becomes even more important and the single 285mm drilled disc with single piston caliper has just enough bite without the brawn. Powdercoated hubs have been re-laced with lightweight spokes to new rims that have been wrapped in some serious mudslinging rubber.

Firing those rooster tails into the air is the classic BMW boxer twin with a deliberately low geared 5 speed designed to provide tractability on loose surfaces and the light ST flywheel providing snappy throttle response. The 797cc lump was pulled from the bike and given a full overhaul and a much-needed clean, with all exposed surfaces left in their standard metal finish. The metal airbox has been ditched for more weight saving and the twin Bing carbs now breathe through exposed individual pod filters. The simplified exhaust has been heat wrapped from the headers to under the engine where the two sides merge and exit on the open wheel side in a single blacked out muffler. The tiny Bultaco tank, reduced body work and tall front end means the airheads are not obscured from any direction that provides for a dramatic mechanical look, especially when taken front on. To steer the R80 wide motocross bars make for drastically improved manoeuvrability and dressed up with small switch blocks and Ducati Monster master cylinder and levers Marcel’s machine looks ready for battle. But he couldn’t build this forest frolicker without attaching some of its raw materials and he put his wood work skills to use turning up a set of Oak grips. Then he ripped off the unsightly front shock mounted orange reflectors and replaced these with a set of his own hand crafted Oak inserts that like the grips are finished to match the colour of the seat. The bulky BMW dash has been tidied up with a side mounted speedo with inbuilt idiot lights and much of the wiring that was remaining routed through the handlebars. To finish the front end off a bracket was made to mount a small Bates-style headlight and even smaller Motogadget mini blinkers. The finished product is what the BMW engineers would have built had they been allowed to sneak away to sleepy Oldenburg in the first place. Rather than the compromises made to meet the expectations of middle management they only got halfway there, but Marcel has completed the ST story of the early 1980’s which was never about creating a true Sports Tourer, BMW had plenty of those, it was about having fun when the bitumen ran out. With an array of motocross equipment, a legendary trials era tank and just the bare essentials fitted it’s a Scrambler not only in name but in action. But just as much as he loves riding Marcel is keen to get the next Box-Werks BMW underway, “This passion and obsession to build motorcycles is my blood… I cannot wait for the next project to start. In fact, it’s already in my basement!”