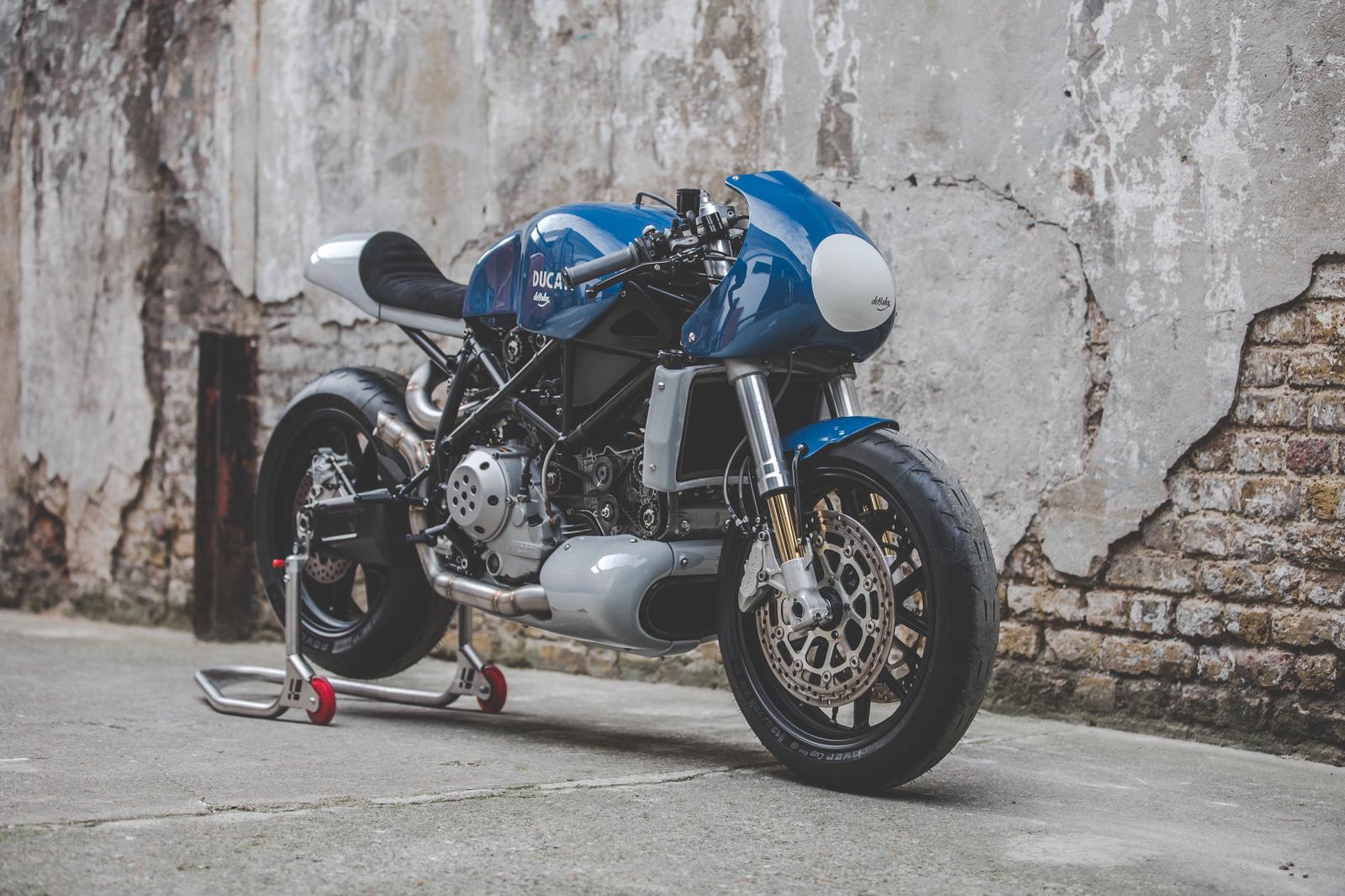 In 2014, during a sojourn in London, I happen upon lesser known motorcycle custom builder “Calum Debolex” as he’s known in my phone. His surname is Tidd-Pryce, or Pryce-Tidd, I’ve never been sure which way it goes, either way, he’s the man behind Debolex Engineering. We strike up a phone conversation and a few hours later I’m being collected in a funny little red van at Croydon station, South London in good old Blighty. We settle in for an afternoon of endless tea drinking and gorping at beautiful Italian bikes. A rapport is formed, a bromance is born! With an easy smile and Hollywood good looks in a elegantly scaled down proportion we delight in a similar vision. Calum and I formulate a plan that will ultimately result in a bike that has undeniably become an icon of modern custom motorcycle culture.

At a terrifyingly young age Calum’s dad was ferried about on the back of his dad’s Vincent Rapide on a homemade baby carrier, it only made sense for Calum to perch on the same chair on his dad’s Vincent Black Shadow. Every summer they’d water ski behind a little speedboat, built by grandad, trips to Goodwood and Silverstone are regular family engagements. Debolex snr works in his workshop with rare vintage machines; engine rebuilding and race preparation is on the daily agenda, needless to say this rubbed off on young Calum, who went on to airplanes in much the same way as his grandfather. Make no mistake, this is not only a thoroughly English family but all things mechanical run deep in the veins, it’s probably a genetic mutation by now.

The life of Calum’s business is divided into Before and After the blue Ducati; the antecedents to the 749 are a half dozen or so less involved “mini builds” which consisted of numerous modifications but as Calum puts it, he hadn’t yet flexed his design skills and created something that truly reflected his capabilities and character. With the arrival of an exotic Italian in the garage and free reign to create a masterpiece he didn’t hold back. The razor sharp beauty of the 999/749 penned by legend Pierre Terblanche, is only skin deep, strip those clothes off and it’s not a pretty sight. The first port of call is a belly pan, created to hide the front exhaust header, some electrical gubbins and incorporate a beautiful air intake for the oil cooler, no doubt recalling the myriad of Spitfires and vintage Jaguars he’s been immersed in his whole life. Using coach building techniques, a buck was made and the tank formed, likewise for the tail and headlightless front end. The tank is an incredibly muscular object, narrow wasted and broad shouldered, it is an object of simplistic and classical beauty.

Two very characteristic traits that this bike bears are the exhausts or lack thereof and the chosen colours. As a keen admirer of Porsche I suggested their hue of Oslo Blue, while Calum chose the light grey for the belly pan and seat unit from a GT40. The two work together splendidly. I remember one day saying to Calum that I like a loud bike, I think he took that as some sort of a challenge as he basically did away with the exhaust altogether! The pipes gently sweep around the body with no sound deadening whatsoever, on start up a slow and deep gulping sound is emitted “berlurp berlllurp..” and then a colossal roar as the engine fires. On tick over it’s a lazy but incredible loud burble, as soon as that throttle senses any movement the volume increase is difficult to explain, I feel guilty riding it around my local area; babies cry, grannies scowl, everybody notices the obnoxiously loud and frantic blare, it is rarely enjoyed by anyone but the rider. It is integral to the whole experience, without the craziness of those straight through pipes it just wouldn’t be the same animal.

Paint barely dry, the bike is shipped off to the Bikeshed Paris show, it was only then that Calum could take a step back and admire his creation, maybe then did he realise that it might be one of the greatest symphonies of style the custom world will see. By the time I see it I liken it to dating a stripper, everyone had seen her before me, but I was still slack jawed when it was unveiled at our midway rendezvous point; a pretty château somewhere in France. Sadly, images don’t quite do it justice, it’s a jewel that can only be truly appreciated with the naked eye. Of course Calum had brought a second bike with him so we were able to share a blast around nearby country roads, I’m sure the ruralites who witnessed that spectacle were intrigued and piqued by the barrage of noise and colour disturbing an otherwise peaceful afternoon.

The future for Debolex, whilst in the same vein as previous work is taking a slight change in direction. Like a Saville Row tailor, Calum has thus far produced bespoke one-offs, his future series of bikes will be off-the-peg and tweaked to suit the individual using an option list. Starting with an initial aluminium prototype, a further 24 units will be carbon copied using a mould. Streamlining the process, Calum aims to reclothe an initial run of Ducati Monster’s with different models promised in the future. Maybe within a few years we can hope to see a Debolex showroom with numerous different models to choose from. Whilst not diminishing previous accolades I’m sure we’d all love a Debolex in our garage, good luck mate!