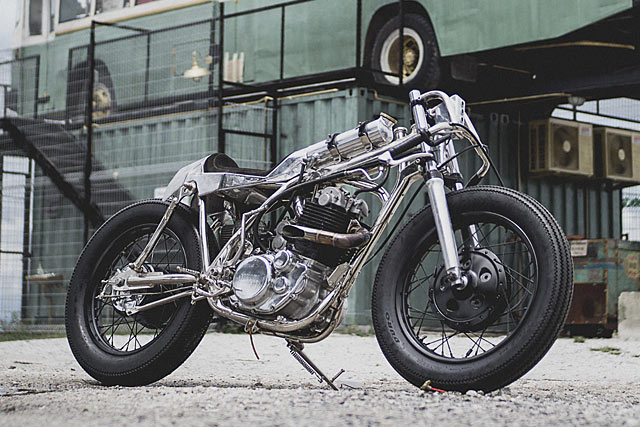 With thousands of custom motorcycles built every year, be it in home garages or the world’s best workshops, you start to wonder just how many remain out on the road. Plenty will end up on eBay as unfinished projects, others are enjoyed for years, while many sit patiently waiting for their owners to find the time to give them a ride. Very few are built to a high standard, used and abused and then totally rebuilt all over again in a completely different style. But for Beautiful Machines, one of Malaysia’s premier customisers that’s exactly what they’ve done. Once a rough and ready sand racer featured on these very pages, their 1993 Yamaha SR400 has been re-purposed into a custom Cafe Racer for the streets with plenty of vintage Boardtracker flair. The idea of turning a race bike into a radical street weapon isn’t new, but given this SR was first built using plenty of recycled parts it would have been a shame to have seen the supercharged engine just left to sit in a rusty frame. When we last saw the machine now known as Mentadak (or ‘Praying Mantis’ in Bahasa Melayu), it had just successfully competed at Rollin Wheelz on Balok Beach. The rustic looking Yamaha with its skateboard deck seat and chunky tyres did the shop proud, but covered in sand and saltwater things could have gone downhill fast. Julian from Beautiful Machines tells us, “We felt that we wanted the naked SR to have a different stance, and so we began some ‘minor’ changes.” Minor is one way of putting it, but they are known as one of the few workshops who constantly evolve their bikes over a number of years until they truly unleash the machine’s full potential. But before work could commence on MkII each surface had to be cleaned, rubbed back and rid of all the sand that falls into every hole and crevice after a few days of hard racing on the beach. Stripped back to the frame the engine was the first to get a makeover, not needing too much to ensure the fire-breathing 400cc engine was still at its best. Running an Aisin AMR300 supercharger belt driven off the custom machined flywheel, the once naturally aspirated engine managed to burn two stock pistons in development. A forged Wiseco item was used to reduce the compression and add knock resistance. An internal check showed it and the valve gear was still looking mint even after some seriously fast racing. Pumping the air/fuel mixture the Keihin FCR-MX remains as it once was, but the inlet tract has been redesigned for a neater appearance. The exhaust also got a full on overhaul, previously it ran a very standard style header pipe in stainless leading back to a reverse cone muffler. Now you can hardly think when the engine is fired up with a totally open pipe, once again beautifully crafted and welded from stainless steel that vents almost immediately to atmosphere. Inside the engine is Beautiful Machines own cam shaft that was milled in-house to very precise specs to make the most of the boosted air being fed into the engine. Fitted up with a new filter and plug, it was re-tuned and ready to be slotted back into the frame. That previously stock chassis has come in for a full overhaul; a priority given it was raced on the sand without paint or any protective coating. The first incarnation was all about being practical and race ready, allowing parts to be bolted off and on as quickly as possible between races. Now going for a much cleaner look, considerable time was spent smoothing out any edges, adding metal for improved rigidity and then grinding the whole thing back to a perfect finish. Then it was time for it to jump into a very special bath, one that would have it looking resplendent like an old Colt .45 in a brilliant nickel finish. Next on the chopping block was the old set of adjustable remote reservoir shocks that had served the team well in racing but didn’t give the vintage look they were after. Instead MkII is now hardtailed with a set of stylishly curved rigid braces that connect to the original shock points. The front forks remain standard SR400 items but having previously been painted black and receiving more than a few battle scars, to bring them back to perfect condition required hours of elbow grease. While at first glance it may appear as if much of the bike received the nickel finish, it was only the frame, with the rest of the bright work hand polished. There is literally hundreds of hours of work on surfaces as varied as the rear drum brake, to the engine covers and even mechanical components like the torsion bar. All of this was done to give the bike a consistent appearance that would accentuate the all new body work. The skateboard wooden seat was shown the door and a new tail-piece and seat arrangement designed. But before it was hand shaped, the original tank was re-worked and mounted further back on the frame and lower down for a cleaner look. It also got new and improved mounts, strapped down with vintage leather belts and buckles and the neck machined to accept a classic filler cap. Now the tail-piece could be aligned to the rear of the tank and the hand bending and shaping could begin. Beautiful Machines is a labour intensive operation, not afraid to use their considerable manpower and skills to get the job done right, the old-fashioned way. Before it was fitted up for its padded seat, it too joined the tank in getting hours of aluminium polish applied until both came up with a mirror finish. Having stylised the bike with this Cafe Racer come Boardtracker feel, the bars would be vital to the overall appearance. Once again the metal artisans fabricated a set of vintage bars that start as two single pieces bolted directly to where the risers once called home. These two supports then flow over the front of the bike to join a common bar hovering over the front tyre. Wrapped in leather for the grips and fitted with inverted levers it’s the perfect way to finish out the look.

Wanting to be able to ride it on the street, a crazy four LED projector headlight box was formed from aluminium to lead the way. Finally the vintage feel was completed with the factory disc front end swapped for a drum brake and the black wheels fitted up with classic Firestone tyres. For the team at Beautiful Machines it’s hard to really define ‘Mentadak’, “From a stock SR to what she is now, stripped off what’s unnecessary, she’s just this really lean looking beast of a machine and that’s what we all love about her,” smiles Julian. Which is exactly what a shop bike should be all about; a collective effort, a chance to push boundaries most customers would be unwilling to consider and deliver the second incarnation of a truly radical ride. It all goes to show why Malaysia is fast becoming one of the most innovative places for crazy custom motorcycles.