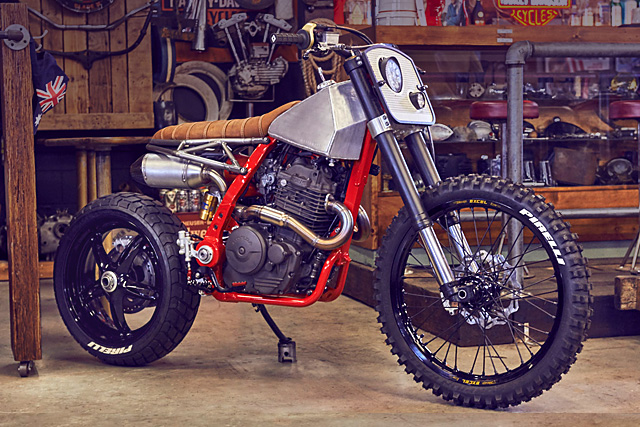 If you tell a small child not to touch something, the chances are the very moment you turn your back they’ll not only touch it, but bash it around and probably break it. Maybe they’ll even set it on fire. So when Jeremy Hutch’s parents kept saying no to motorcycles it was inevitable that he’d find a way to get his hands on one. But this is more than childhood rebellion, Jeremy’s passion for two wheels clearly runs deep and his skills as an Industrial Designer have taken he and his 2000 Honda NX650 Dominator known as ‘Death Crusher’ all the way to the highs of a personal invite to the Handbuilt Show in Texas. But you don’t go from childhood dreams to invitational builder under the Hutchbilt banner at one of the world’s premier shows overnight and this journey in motorcycle madness has literally taken Jeremy around the world. Growing up in Durban, South Africa, Jeremy and his friends would save their pocket money for the annual fair so they could thrash little Italjets around on the track. Coming home after a day of mini-moto madness they’d badger their parents for a bike of their own but to no avail. But finally there was a break through. “At 12 I managed to get my hands on a Yamaha RZ50cc which was trashed and customised it into a Marlboro Yamaha circa 1985 race bike and sold it and bought another one. This is where bike building and customising started for me. I love design in any aspect, form or function. I admire innovation and originality. I have designed everything from bars, nightclubs, furniture, clothing shops and cars but my passion for motorcycles runs deep. This is where I love to be.” For this build Jeremy scored an increasingly popular 650 Dominator and with inspiration from the Elsinore Motocross bikes of the ’70s set out to build an aggressive street legal speed tracker. With the bike in his possession it was stripped down with absolutely everything removed until all that was left was the bare engine and the front section of the frame. Jeremy always had in mind a bold, bad ass, rear end but you can’t just bolt any old swingarm onto your stock frame. So using his considerable skills he’d learnt over the years he modified the back section of the main frame to accept a Triumph ST swingarm. No doubt it was a case of repeated trial and error but with a billet linkage in place the alignment of the chain between the Honda frame and Triumph rear is now absolutely spot on! With the drive section taken care of a new place to sit had to be fabricated and Jeremy came up with a new subframe that is both beautiful in form and function. Custom mounts ensure the rider sits just forward of the swingarm pivot point. With the subframe left in raw metal for an aggressive industrial appearance it made perfect sense to craft the seat from a material with similar qualities and the hand stitched genuine leather item looks like it was alway meant to be. In true MX style the seat extends up onto the tank, a form of agate protection (I believe that’s the technical term) not afforded to riders of modern sportsbikes. And what a tank it is, not only crafted meticulously from hand, it holds both the fuel and acts as shield for all the electrics and the battery. Starting with sheets of aluminium Jeremy sculpted each piece slowly creating the look he was after while always having to keep in mind the practical needs, including clearing the in frame oil filler. With the shape picture perfect, the stunning welds laid down and the filler and cap crafted it was off to have the tank pressure tested. It’s vital to ensure there are no leaks and that even expanding fuel vapours won’t leak out when subjected to heat. With a pressure line plugged in, the operator turned on the switch, and BANG, the compressor failed and Jeremy’s beautiful tank was opened up like a butterfly. Some of us might be straight homicidal after such an incident, but not our South African trooper who simply built another one from scratch all over again. But the custom parts didn’t stop there, Jeremy wanted to combine that “brutish rear end with a nimble, hi-tech front end” and to do so the headstock now swings a set of one-off billet triple trees. These clamp the shortened and modified front forks from a CRF250 with the stem spinning on tapered roller bearings. The lower section of the Showa forks holds a Brembo caliper clamping onto a Braking front disc rotor with fluid coming down a braided line. Out back the suspension is as serious as things get, the Triumph swingarm now controlled by an Ohlins rear shock with the adjuster cleverly mounted by the rider’s side. While matching the fronts stopping power is a custom Brembo rear brake setup and master cylinder, with pressure sent via a Hammerhead rear brake lever and cogs swapped with an MSR gear shifter. Without it the NX650 Dominator, a dual sport adventure bike after all, wouldn’t have become such a mainstay in the custom bike world; that punchy and reliable 644cc single is a hoot! Jeremy has given his a full rebuild with OEM parts before painting the engine in a neat ceramic coat. To extract a few extra ponies fuelling has been upgraded with a CR carb that draws breath through a washable Uni filter. But really getting the gases flowing is modified FMF Powerbomb F4 pipes coming out each side with the exhaust finishing out in twin mufflers under the seat with carbon fibre tips. Sending that power rearwards is a custom output shaft with a billet carrier bearing mount for the stepped down front sprocket. The back wheel is a freshly painted Triumph unit while up front an Excel rim has been laced to a Talon hub with both ends wearing aggressive Pirelli rubber. Keep things extremely tidy all the wiring has been run through the frame, a painstaking task but absolutely worth the end result. The system starts with an Antigravity battery that feeds into the Motogadget M unit module all fired into life by a Motogadget RFID ignition lock for an added dash of custom cool. Also from the Motogadget catalogue are the Motoscope mini speedo, M Switch push button controls and M Blaze turn signals that help keep the bike 100% street legal. Custom Flow billet footpegs keep Jeremy’s feet planted while ODI grips and ASV levers mean all controls are the best in the business. The MX styling of the front continues with Pro Taper bars and a beautifully crafted front number plate in white that houses the offset LED headlights. The whole package comes together perfectly as you would expect from an experienced designer and there is no doubt this Hutchbilt machine has achieved the aggressive street tracker brief that was first envisioned. The mix of raw welded alloy, billet components and purposeful rubber is balanced out with high-end Ohlins, Brembo and Motogadget products to give a level of refinement you don’t normally expect to see on such a machine. But it’s this combination that not only gives Death Crusher the right look but ensures it can well and truly back up its boast when the throttle is cracked. Now living in Venice Beach, California, Jeremy isn’t resting on his laurels with a recently finished Triumph Thruxton cafe racer and unique BMW R80 in the works. But as the sunsets on the West Coast you’ve been warned about what’s coming up in your mirrors, Hutchbilt’s Death Crusher has victims to claim and it’s packing a full arsenal of not so friendly fire!