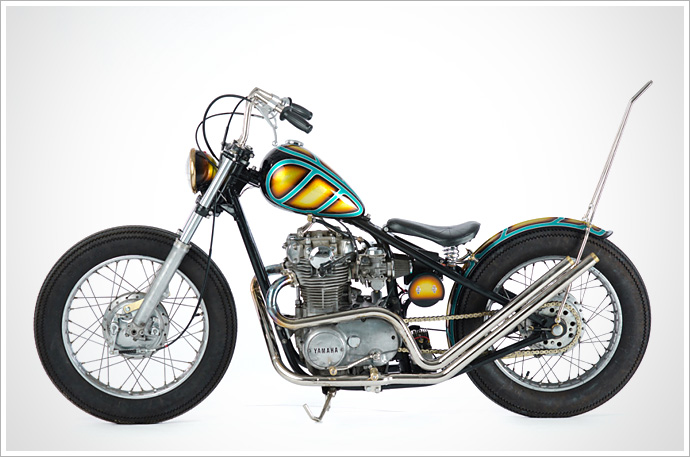 Yamaha’s XS650. It seems like there’s not a single style or genre that it can’t morph itself into. Chopper, bobber, rat, brat, cafe, tracker – hell, I’ve even seen it do a decent board tracker. It’s like some Japanese designers in the 1960s locked themselves in a room with a load of bad drugs, a Swiss Army Knife, a rubber mask from mission impossible, Optimus Prime, a doppelganger, the liquid metal robot from Terminator 2 and one of their mates who liked to wear his wife’s underwear on the weekends and exploded out three weeks later with blueprints that would transform the way the world thought of Japanese bikes and the way we think about a custom bike platform. Of course, this one is no different. It’s the retro brainchild of one Greg Hebard from Salt Lake City, Utah, and as you can see it looks about as close to the original bike as night looks like day. “I’m Greg Hebard. Owner of Desert Motorcycle Company in Salt Lake City, Utah – and this is my bike, “Golden Spike.” It’s a 1981 XS650 with a stock engine and rejetted BS34 carbs.” “The frame has a shaved stock front loop, with a custom (zero stretch) rear section by me. The rake is stock. The forks are from a CB750K and they have been shaved and lowered 2 inches.” “The wheel are miscellaneous 1970s CB pieces and the tires are Firestone squigglies at 4.00x19F/4.50x18R. I’ve only ridden it a handful of times so far, but I’d have to say that my favourite thing about the bike is the handlebars. I’m pretty proud of them.” “For my next modification, I’m considering getting a few more parts nickel-plated. I was originally worried about it being too flashy, but I think it could use some more shiny bits.” “This was my first successful seat upholstery job, but I think the king and queen I’m planning on my next bike might be too tricky for me to do…

I got my LeBlond lathe when the bike was about halfway completed, so I got a good chance to learn how to build some interesting parts, like the brass wheel tensioners and knurled brass foot pegs.” ”Josh Scott of Old School Helmets for painting my tins (he’s a rad dude). Steffan at Zombie Performance for selling me some mandrel bends so I could build my bars. A lot of the local guys here in SLC, for giving me some ideas and helping me out. And, of course, my parents.” Update: Doofus me mistook Greg’s company name as a typo. It’s Deseret Motocycle Company, not Desert. Need proof? Why not visit his blog where you can see many more instances of good spelling. Unlike this one.