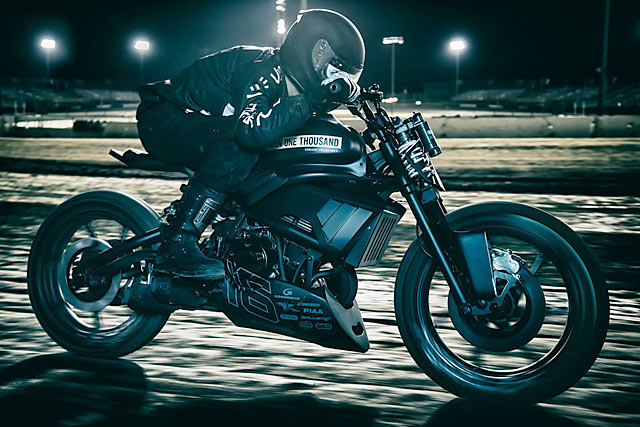 Customising bikes is a gargantuan task at the best of times. And unless you’re a rich trust fund kid with zero family ties, no friends or social life, and a garage straight from the MotoGP pit lane, time probably isn’t on your side. So choosing a donor bike that’s almost entirely inappropriate for its intended custom end game is just adding insult to injury. It’d be pretty much a death warrant to the project – unless you’re biking mega clothing brand, ICON 1000. They love death warrants. And death too, apparently. Here’s their dead cool Kawasaki Vulcan 650S. Taking their creative inspiration from what can only be described as a rather meagre source, their observation regarding the bike’s parallel twin engine and some beer-fuelled creativity got them thinking. Thinking crazy, too. ‘Tracker bikes have parallel twin engines, don’t they?’ Why Yes! And some greyhound buses have V8 engines, which is why all those people take them drag racing. The lunatics…

So the hard work to chase insanity began. The Kwaka’s factory 41mm conventional forks were razed to the ground by the ICON team, along with three seperate pro fabricators. First they made it worse. Then they really screwed it up. But they didn’t stop there. They pushed on until it was a real death machine. All be it one that ended up handling the dirt better than any Harleysaki designed by Japanese businessmen should ever have the right to. And what do you do once you’ve jury rigged your own front suspension on a bike that’s about familiar with the dirt as the grim reaper is with Occupational Health and Safety? Why, you bolt on $6000 worth of bouncy Nitron piggyback clickers to help atone for your trigonometric sins – that’s what. The bike’s original, and very ‘Hot Wheels’ spinners were unceremoniously shown the dumpster in favour of a new pair of 19″ contrast-cut seven spokers from the house of Harley. And don’t they look schmick? Sure, William and Arthur are probably turning in their respective graves, but somehow we thing that’s exactly what the ICON boys wanted. Evil, much?

Moving on to the hot hoops, they’ve added a pair of Maxxis DTR-1s. A favourite of theirs since before they were un-discontinued, they are specifically designed for dirt track racing and are the choice of death-proof champions; especially those that relish the ‘blue groove’. Clearly the Vulcan’s dearth of boring is not at all helped by it’s off-the-hook headlight design. Powered by some repurposed PIAA spotties, the bike fairy vanilla OEM headlight has now been scythed in two and bolted onto the forks, either side of the front mud flinger. For some reason it reminds us of Ducat’s Diavel – and in a good way at that. ICON’s partners (or their death cult, as we preferred to think of it) also tipped in for the tracker with their usual shit ton of goodies for the build. Driven Racing, Lyndall Brakes, Goodridge hoses and Ballistic Batteries were all part of the solution, and part of the problem, too, if the photo below is anything to go by. Let’s hope that guy made a full recovery. Just say ‘no’, kids.