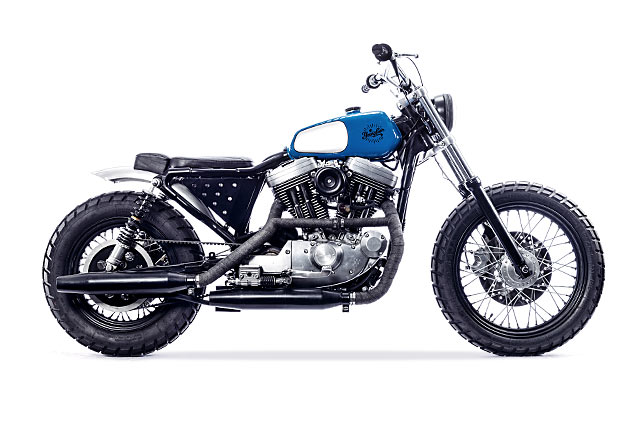 When you’re young, brash and at the top of your game you can push a lot of buttons and get away with it. Just ask the great Muhammad Ali who once said, “I done wrestled with an alligator, I done tussled with a whale; handcuffed lightning, thrown thunder in jail!” The motorcycle equivalent to this level of smack talk is like standing in front of a pack of grey bearded Harley Davidson enthusiasts having defiled the purity of some fine Milwaukee Muscle. The reaction will come quick; bottles may fly, F-bombs will rain down and a chase worthy of the Blues Brothers will ensue. It’s not that the Young Guns Speed Shop lads set out to upset those who cry, “why?” – it’s that they simply answer, “why not!” Their latest bike is yet another badass build with an exclamation point, a 1999 Husky Harley Sportster known simply as ‘DK’. DK is short for Dany K, the bike’s owner. He’s a big fan of Husqvarna two strokes of the ’70s, but he also wanted a practical, daily rider and mostly the two just don’t go together. So as YGSS’s Nik explains, “DK, the owner of the Ace Cafe in Lucerne, Switzerland, got in touch with us, asking if we could build a bike for him. We suggested a bike which will be rideable, perform well and good looking. As we’ve built many sportys before, a 1200 carburettor sporty was our suggestion.” Fairly quickly you could see where this was heading. Where some would offer to perhaps add a little Husky trinket to keep the owner happy the Young Guns wanted to go the extra mile. With the Sporty stripped down to a roller the decision to use an earlier model with a carby over EFI is sign number one the Young Guns had thought this through. Fitting the little Husky tank onto the big Harley frame might be possible, but you’d be left with a litre of capacity if you still had to stuff all the EFI gear inside. So with that hurdle avoided before it was reached they could focus on getting the little 1974 Husky CR250 tank to fit. A new tunnel was fabricated so it would stretch over the wider Harley backbone. While relief cuts were made in the underside to clear the rocker covers before the whole thing could be welded up and pressure tested. Clear of all leaks the next challenge was to get the rest of the tins to look right without having the proportions all to cock. A slim front fender would never work with the rubber they had in mind, no sweat, throw the stock one in the bin, next! Out the back a hand rolled ribbed item takes care of the fender duties, but there is an importance in leaving it raw steel. Along with the raw alloy look rocker covers they join with the section of raw alloy left on the tank to help the Husky unit flawlessly integrate into this truly foreign space. “The paint job was done by our buddy Beni Bosshard and the drawings by Atelier Zweilicht” enthuse the YGSS team, happy to be working with brilliant vendors. The blue paint with the Young Guns logo in black is just enough colour to add some fun to DK without taking away anything from its simplicity. Speaking of which, nothing says a simple rear end like taking the air saw to the subframe and with it cut back to the shock mounts the weight is further reduced. The entire frame has been coated top to bottom in a hard-wearing black, that also adorns a punched metal cover obscuring the oil tank that neatly hides away under the seat. DK and his passenger sit comfortably on a traditional black leather seat and a stylish half cut pillion pad, all stitched up by Swiss ace Yves Knobel. Wanting to add some more Husky like touches the YGSS crew started a search for parts. “To give it that ’70s dirt bike look and feeling when riding it, we have used Fehling dirt bike handlebars,” explains Nik. A little more Young Guns genius keeps the bars clean with the master cylinder mounted below the tank and operated remotely by a simple cable. The rest of the gear is Magura for a big dollar feel on this ultra-clean ride, with vintage grips taking care of business. Mid-controls were the only acceptable option on this HD and fitted up with bear trap pegs you can just imagine DK taking to the air. So to power it through the nearest berms having come back down to terra firma the Young Guns decided that even the big cube Sportster engine packing 1200cc wasn’t enough. With the cases cracked a new cam adds some extra lift and duration while ramping up that lumpy idle. With the extra air coming through a Mikuni flat slide carb and custom filter. To give the bark some bite a set of open black mufflers mount up to modified heat wrapped headers. With the whole thing working in unison thanks to a Screaming Eagle ignition that allows for precise engine tuning. More electronics and less places to hide them required some clever thinking and to make some extra space a small box was fab’d up and hidden below the gearbox. This hides a small li-ion battery and as many of the components that could be packed inside. Up on those Fehling bars are the smallest switches money can buy and a Motogadget setup of electronic ignition and speedo. The headlight might be small even by Sportster standard but the taillight does it one better, a miniature unit hidden in the pillion pad. With some hard charging always on the menu the rims were sent out for powder coat and have been re-laced to the stock hubs. Wrapping them and the build up nicely are a pair of Bates Baja tyres with their knobby construction built especially for Harley’s that like to go off-road. Which as Nik explains is exactly the plan, “the bike is super fun to ride and when you take a seat on it, it really feels like riding an old badass dirt bike.” Whether Dany will go and find a group of bikers to shoot rooster tails at will depend on how brave he’s feeling, but thanks to the Young Guns Speed Shop getting away on DK is always breeze.