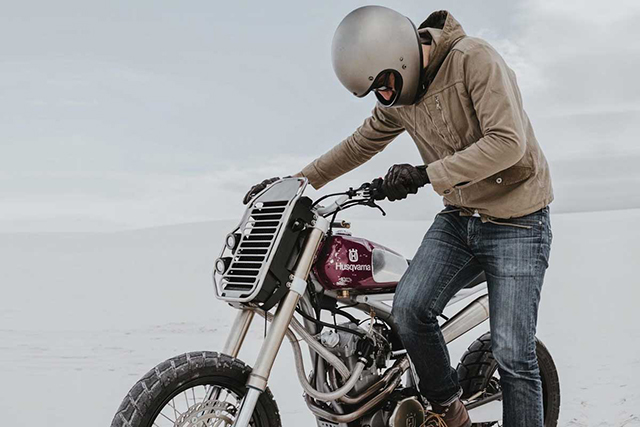 My name’s David Mucci. I run a studio called Moto-Mucci where I build custom motorcycles and do design contracting for the motorcycle industry.

Where are you right now?
I’m based in Portland, OR

What was your first bike?
A 1978 CX500 that I bought mostly in bins about 11 years ago. I tore it down to the frame before ever riding it and turned it into a design project. 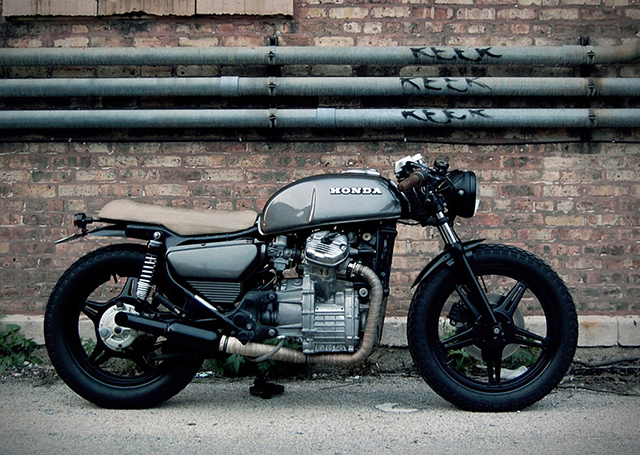 What’s your background?
I got my degree in Industrial Design from the College for Creative Studies in Detroit. There I focused on product and transportation design. My mechanical skills I’ve been acquiring since I was about 16 through repair manuals, tech school classes, industry mentors and the University of YouTube. 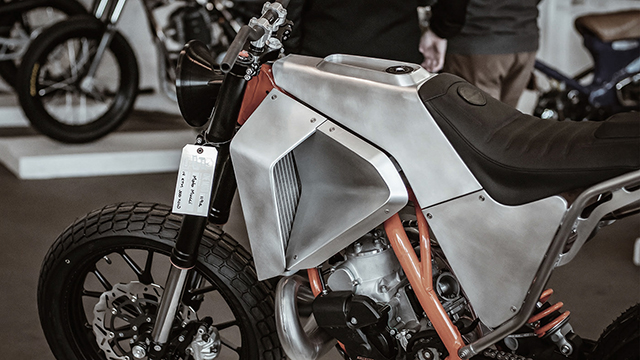 How did you get into building motorcycles?
I was into wrenching on cars for years before I bought a bike. Back in Chicago I had a 1989 BMW 325is that a buddy and I were rebuilding from the frame up. We probably put close to a year of work into it. Everything was out of the car, rebuilt, and on tables waiting to go back in after paint. Then my garage got broken into. They cleaned me out aside from leaving the chassis on jack stands. Losing everything from the car sucked but losing the lifetime of collected tools was worse. I had no interest in starting another car project after that, so I bought the CX500 and a $100 Craftsman mechanic’s tool set and started over. 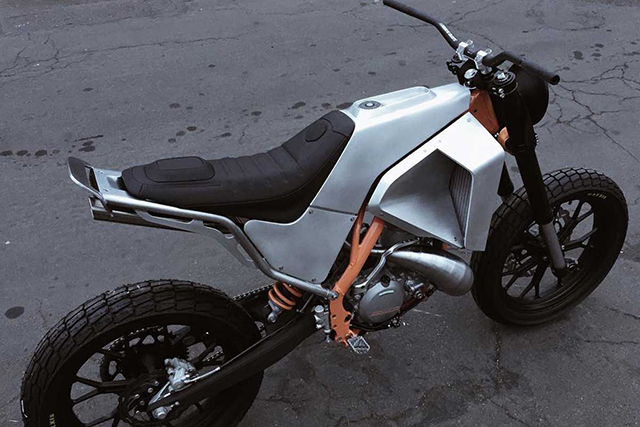 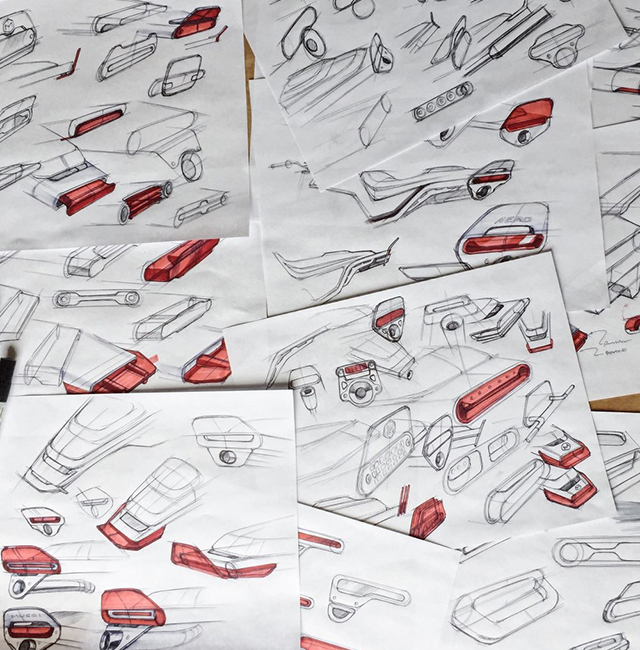 We loved seeing the KTM 300 build up close at the One Moto Show. Your attention to detail is amazing. Do you use CAD? Do you sketch? What’s your design process?
Yes, all of the above. I go through a 4-round design phase with clients at the start of each build project. It starts with a wide range of loose sketches and we continue refining until we get to a fully detailed concept. During the build process I like using a wide range of techniques. The KTM is fitted with some old school, english wheel, hammer-and-dolly, formed aluminum body work. But I also went into CAD to design and build parts like the 3D printed carbon fiber headlight and CNC forged aluminum hubs. I try to learn at least a couple new skills with every build. 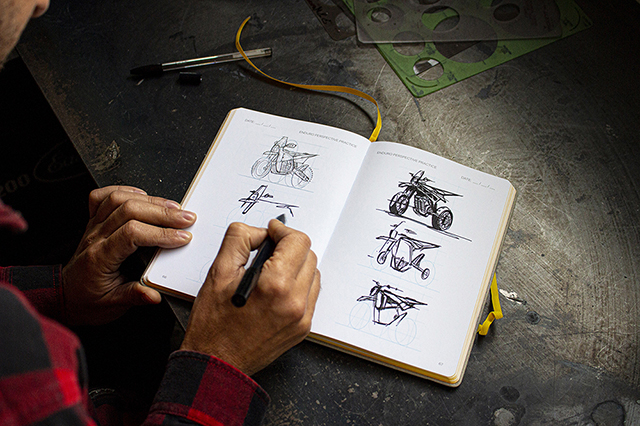 You are pretty handy at drawing your concept bikes. What’s the Kickstarter project you are involved in at the moment?
Over the past few months my buddy Matt Marrocco and I have been developing a sketch tutorial book called IDRAW Motos. It’s for anyone who has an interest in drawing and designing motorcycles whether to plan out their next custom, think up some rad future machine or simply sketch up their pride and joy sitting in the garage. The book is front loaded with a ton of foundational information on motorcycle dynamics so that readers understand the differences between model types. It covers basic anatomy, engine type and configuration, handling dynamics and how to set up a model-specific chassis. All that’s in chapter 1. From there the book gets into step-by-step tutorials, perspective lessons, wheel drawing techniques and layout fundamentals paired with 100+ templates to sketch over. The campaign is live right now here. 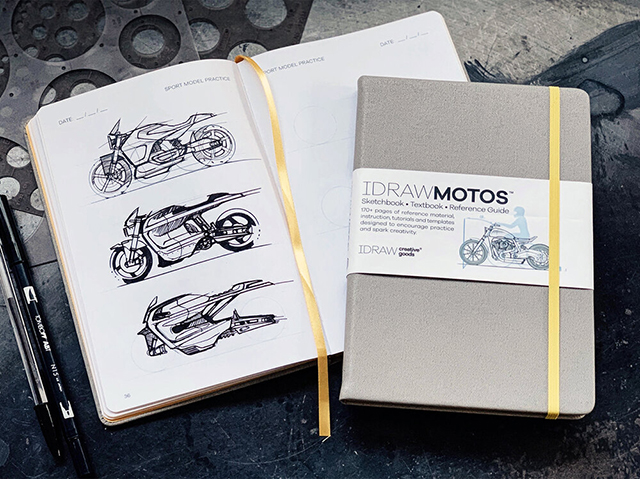 What’s inspires you?
It can be anything. I just try to keep my eyes open. If there’s one thing that fuels me to keep doing this, or creating in general, it’s the desire to put something out into the world that wasn’t there previously.

What’s the best ride you’ve been on?
Oh wow that’s a tough one. I think the most memorable and awe inspiring was riding Ducati’s from Ho Chi Minh City to Hanoi via the Ho Chi Minh Trail. Southeastern Asia blew my mind. There was one hell of a learning curve pulling out of the garage on a Hypermotard straight into a buzzing cloud of scooters. You almost just float with them like a current until you’re where you need to be. 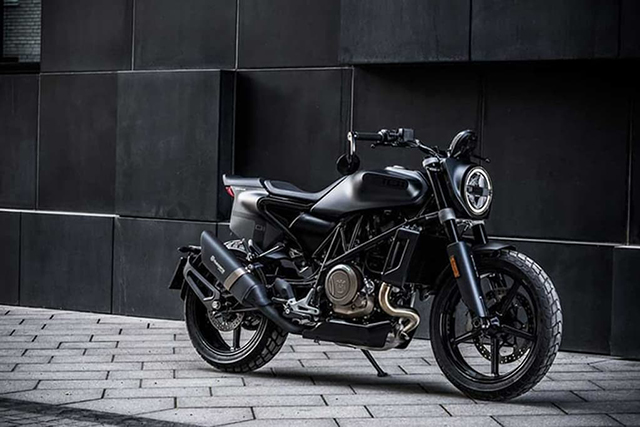 What’s your favourite modern bike?
I have really been digging Husqvarna’s new direction for their street bikes. Honestly if I scooped up a 701 Svartpilen it’d probably be the first bike I owned but never modified. From a design perspective I think it’s right on the money. The Aero concept was a beaute as well. 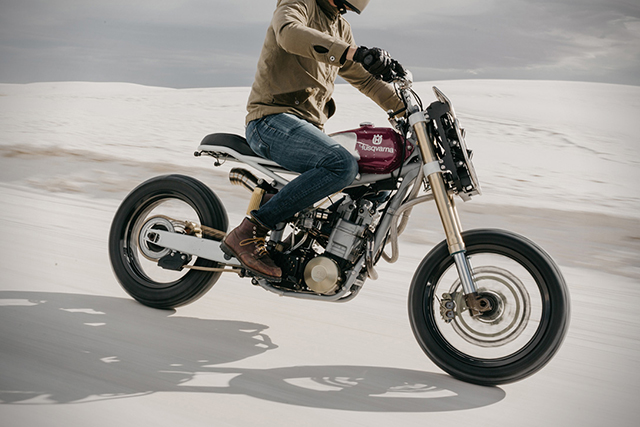 Dream bike if money was no option?
If money was no object I’d keep commissioning bikes from other builders; Thrive MC, Autofabrica, Max Hazan to name a few.

Is the future of motorcycles electric?
Yes but it depends on the timeline. I think we have a huge cultural divide to look forward to regarding gas vs. electric vehicles. It may be inevitable but I don’t think we’ll see gas vehicles banned in our lifetime. Not until those of us who grew up with found memories of combustion are long gone. But in the near future I’m eager to see how performance customization evolves in a grassroots fashion with these new powerplants. There have been a handful of impressive custom electric bikes popping up but with mostly aesthetic and suspension upgrades. I think there’s still a lot of fear around messing with the black box at the moment. It’s going to take a different kind of builder to start breaking into that but I’m sure it will happen.

What’s next for Moto Mucci?
I’ve got a couple builds I’m working on right now. One you’ll see gracing the pages of Pipeburn so keep an eye out! 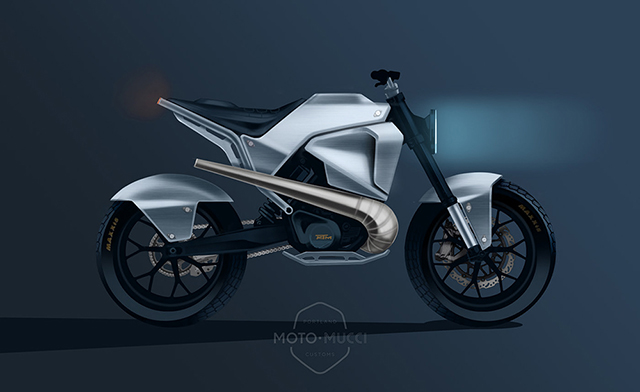 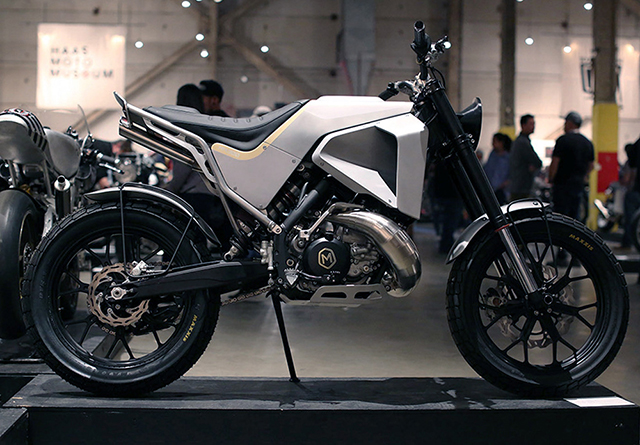