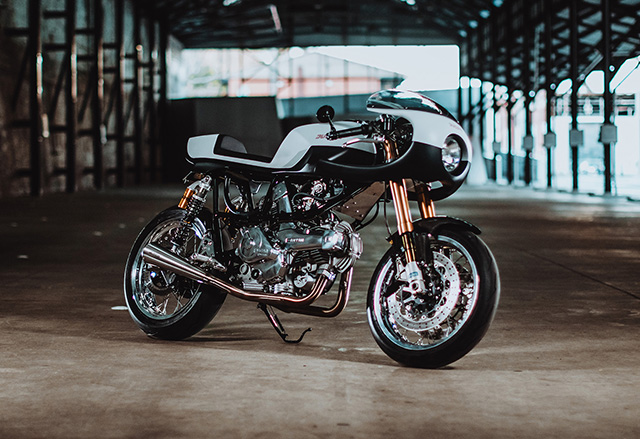 For just over a decade, beginning in the early ’80s, the Cagiva brand was the king and dominant force in Italian motorcycling. Winning world championships, Dakar Rally’s and buying out Ducati, Husqvarna, MV Agusta and Moto Morini; but all that is over! What we do have as the company’s legacy is the beloved brands it managed to save and a hand full of models from that glorious period worthy of celebration. Based on the beautiful Ducati Pantah, the Cagiva Alazzurra is one such bike and with a band of merry men, Sydney’s Ash Kollmorgen has taken this 1986 model and made an exquisite custom cafe racer.

“The Cagiva was chosen almost by accident as I was looking for a Ducati Pantah and had missed out on a few leading up to this purchase,” Ash tells us. So while away on holiday in Mexico he thought he’d check out the online classifieds and noticed this particular bike. A quick call back to Oz and Ash had his Dad call the owner to see if he could come around and have a look at the bike. It was nearly a case of missing out again, with three other buyers present, but having called first the gentleman owner offered Ash’s Dad first bid and this Italian wasn’t going to get away. 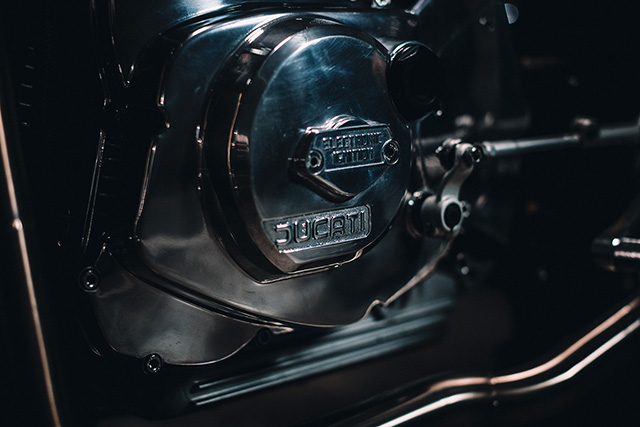 “It was in very good but well used condition, I bought it from the original owner who had maintained it impeccably throughout its life but had just grown too old to ride it as much as he would have liked,” recalls Ash. But to craft the custom bike he had in mind, Ash needed to find a shop that could bring it all together, “Darren and Vaughn from DNA Custom Cycles are responsible for taking the ideas I presented to him and turning them into the reality it is today, Darren has a phenomenal eye for detail and ability to custom make parts to suit.” 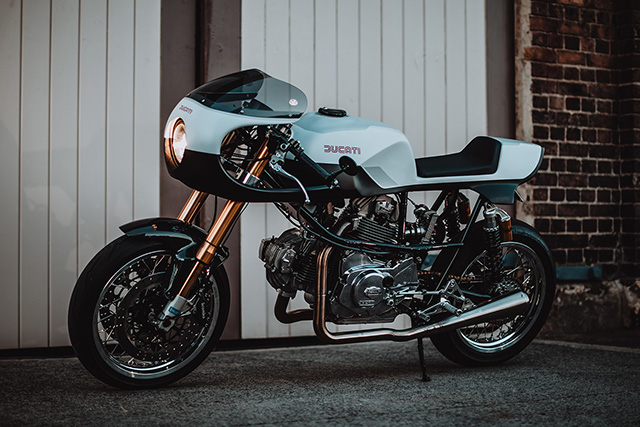 With the bike stripped down and the engine out for a serious rebuild the focus was on the aesthetics and it was here that a great deal of inspiration was drawn from designer Nuno Capello “I have had a lot of contact with Nuno during the build and he even supplied me with a front fairing for this build.” But while the front provides traditional appeal, it’s the monocoque masterpiece that is the pièce de résistance of the beautiful bodywork. Hand fabricated by David Pagano the whole thing cantilevers up to reveal the stunning engine and accessories beneath. 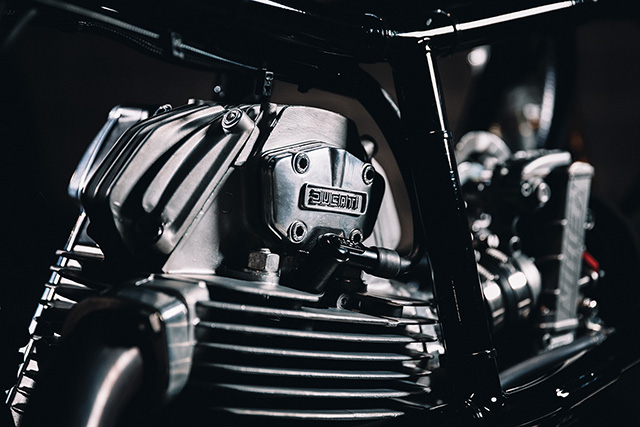 Although the original Cagiva styling was truly ’80s only, David’s work is a timeless creation with the well proportion tank massaged in all of the right places. Before continuing rearward to the shapely tailpiece that gives the bike some more aggressive lines and the winglets that offer a unique touch. To make the most of it all required just the right painter and Ash knew just the man! “Sam Muldoon from Colourfuel came up with a plan to paint the frame gloss and the bodywork in a tri-colour matte. His paintwork design and execution is nothing short of phenomenal.” 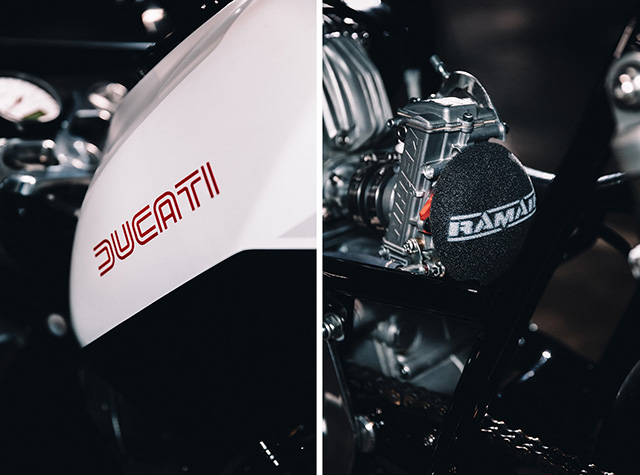 Looks were always important, but the real focus was the engine and its now 750cc with high flow heads thanks to John Harding and RAMS Head Service. Pumping the capacity up was made possible by adapting NOS 750 cylinders to the 650 cases, no easy task, while also slotting in VeeTwo ‘Torque’ grind Cams and adjustable pulleys. To feed the fire Keihin 39mm FCR Carbs are fitted using port matching manifolds with a downdraft item on the front and a sidedraft on the rear. While a Silent Hektic Monoblock ignition ensures there is plenty of spark and the battery is hidden under the tail. 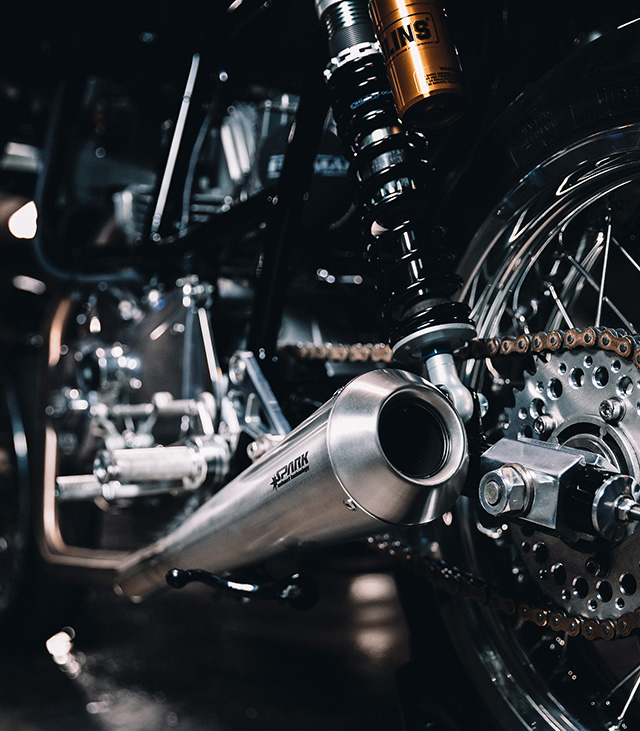 The rest of the electronics packages is the ever-popular Motogadget hardware with keyless ignition. All beautifully wired up before Darren put the bike on the Dyno and spent countless hours ensuring a perfect tune, fat torque curve and one hell of a sound out of the Spark mufflers attached to the custom headers. Then the DNA crew turned their attention to making sure the Cagiva handled like a dream and stopped just as well. For that purpose you can’t go past Ohlins suspension and Brembo brakes, but it’s no bolt-on affair. 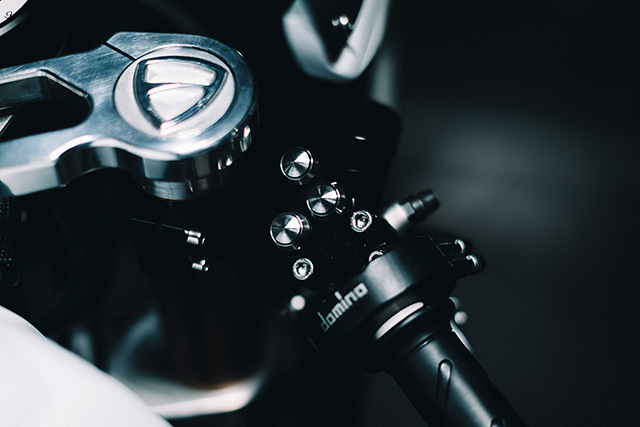 “The wheels are very unique to the build and were custom-built using a spoked wheel hub from a late ’70s Ducati 750/900 SuperSport and adapted to the disc brake rear via a custom 6 bolt disc carrier. The front wheel was laced to a Sport Classic hub,” before being wrapped up in modern Pirelli rubber. The accessories are kept to a minimum but what you also don’t see is the incredible work of Darren at DNA Custom Cycles who made sure the end result is a true dream bike both to look at and more importantly to ride. Now when Ash isn’t working at one of Sydney’s largest nightclubs, he can be found cruising in class on one of the world’s coolest Cagiva café racers. 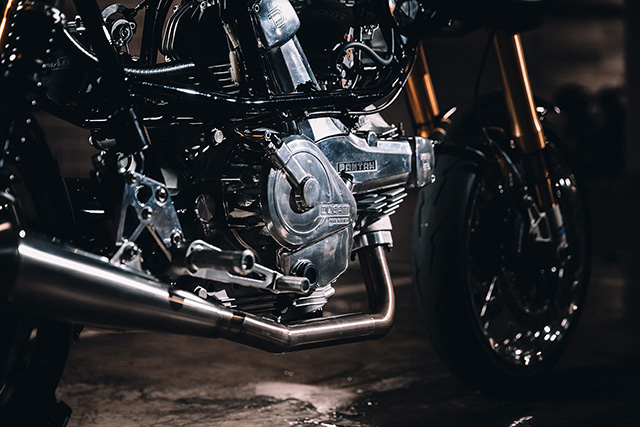 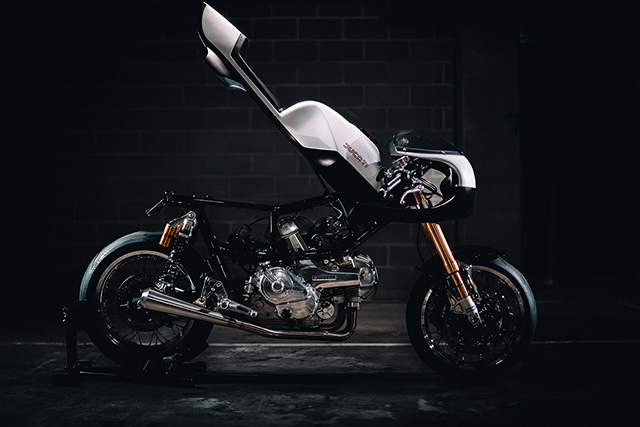 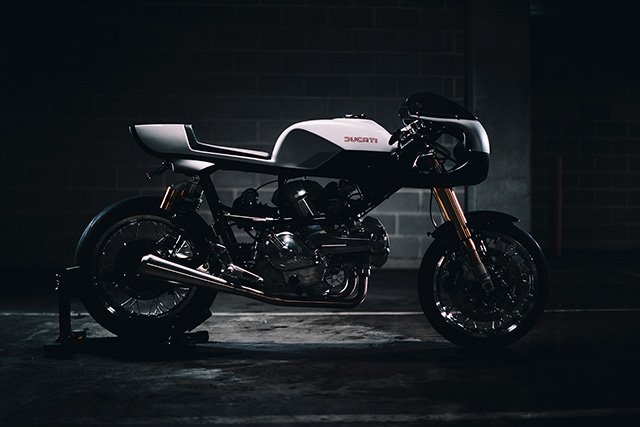 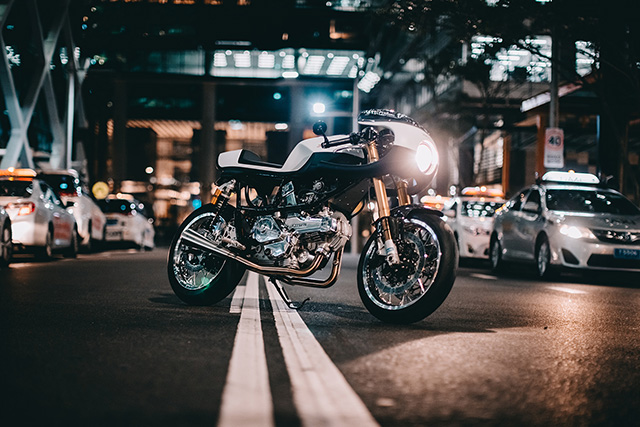