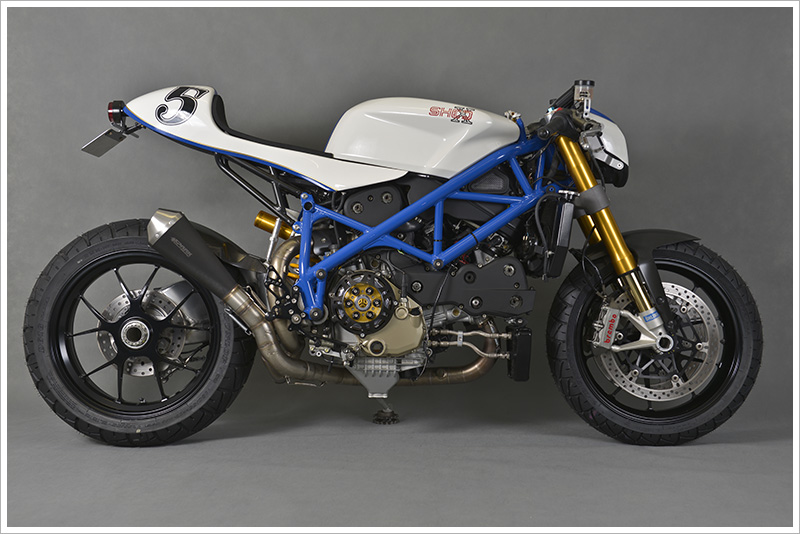 The genesis for the latest to roll out of Sydney’s Shed-X came almost a year ago, when their first build, a wicked café/street hybrid dubbed ‘Bastardo’, caught the eye of a potential buyer. The buyer had a problem, though. To free up some cash for ‘Bastardo’ he needed first to sell his mint 1098S, but in a flooded market he was getting little joy. At about this juncture we can assume the term ‘trade-in’ was uttered. And thus ‘Malizia’ was born. “As soon as I test rode the 1098S,” Neil from Shed-X explains, “I knew we could do something with it to make it more enjoyable around the streets”. To achieve that, the 1098S was stripped down and the frame de-tabbed. But how to get the stance just right? “We decided the only way we could get the seat and tank angle the way we wanted was to make our own sub frame from scratch, and make a mould for two seat styles so we could get the look we wanted,” Neil says. “We are now producing these items, so if you are not in Sydney and want to re-invent your 1098, 848 or street-fighter, we can send you the bolt on parts.” They also fabricated the 2-into-1 exhaust, then mated it to a Radical Ducati megaphone by Spark – by all accounts, it sounds awesome. The original running gear has been kept, because, well, would you replace a barely run-in 1098S running gear? Stock suspension and brakes have also been retained. The wiring harness was adjusted to relocate the ECU, rectifier, and new 12-cell, anti-gravity Li-ion battery. Indicators are in-house fare. ‘Malizia’ (translation: malicious) pumps out about 160bhp, which is the same as the stock 1098S. She has shed about 12kg though, so Neil’s hunch that something could be done to make it more enjoyable around the streets seems about spot on. And what will we see roll out of Shed-X next? Well, we’ll just have to wait and see what the buyer of ‘Malizia’ rides in on.