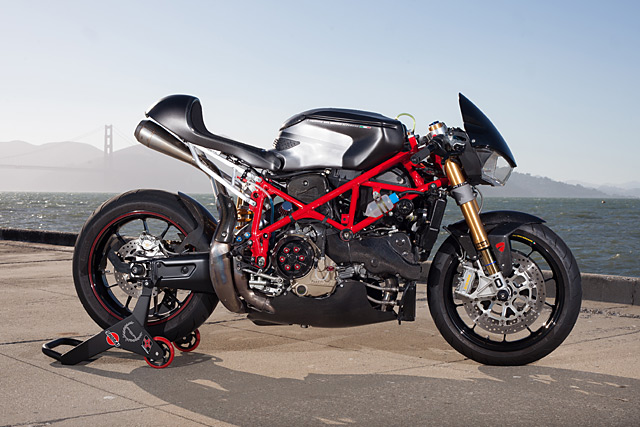 Taking the cutting torch to a Ducati is not something you do lightly, when that Ducati is a limited run 749r homologation special it’s no wonder it took some time before the power tools spun into action. This is not Ezikiel Dacanay’s first Custom Duc having previously built a café racer out of a 1997 916 but that bike was lost to an accident and it would take a few swings and roundabouts to get to the bike you see before you. With a broken wrist and finger a result of the 916’s demise and a painful Helicopter ride to the hospital any man would be forgiven for giving it all away. But when he was back on his feet Ezikiel got straight back on the horse by purchasing a Ducati 749r No. 63 of 500, a little lady called Scarlett. The plan was to café it straight away, but how do you start cutting on a limited run Ducati, so with tinkering in his blood he picked up a cheap 1972 CB500 and turned it into a tasty little ride. But still Scarlett was winking at him, he tried selling her, but one too many tyre kickers sealed her fate. If she was to stay that long red dress from Bologna would have to go, this Ducati was going to be stripped back Cali style, more skin and a whole lot more attitude. The look of this Café Fighter is anything but what rolled off the production floor, gone are all the fairings that gave the 749 its distinctive sports bike lines and in its place all that is functional is on full display. To strip so much weight off an already lightweight bike only to add it straight back on would be counterproductive, so carbon fibre is added to the already factory parts. Rear hugger, front fender and timing covers are all carbon with the addition of a carbon belly pan one of the few additions over stock. With the factory subframe removed and replaced with a shorter and narrower aluminium item, a barely trimmed carbon fibre seat gives the rider a place to sit. With a single HID headlight and bikini style fairing giving the Ducati a whole new attitude. To help finance the build Ezikiel sold off a lot of the unused parts as he went, but one item that had to stay was the fuel tank. The 749r was given a special 18 litre item that was a first for a Ducati of this kind and not again repeated, homologating a machine for racing means getting it right the first time and perhaps Ducati was worried about the new engines fuel consumption. But it wasn’t to be a problem and what is left is one of the most unique tanks of the modern era. To further accentuate the lines of the tank and minimalist panel work the bike has been painted by Stan Carlsen Body Shop with some strategically placed graphics by OverWatchDesigns.com that has a touch of 1299 Panigale R. The engine Ducati pieced together for the 749r is not a garden variety 90 degree V-twin but the best of Bologna designed to take on the World SuperSport championship. Reduced stroke and an increased bore, 12.7:1 compression and large titanium valves enable the 748cc engine to operate at peak efficiency high in the rev range for extended periods of time. You could write an entire article on the engine itself but one thing that was discovered early by tuners was the fitment of an aftermarket pipe could achieve an extra 10bhp just like that and Ezikiel fitted up a reverse cone muffler to add the bonus ponies. With fuelling aided by a dyno tuned Power Commander III peak power is now romping away above 130bhp. If the 749 engine is special then the suspension and braking is even more so, Ohlins, Brembo and a whole host of factory special parts make this a race bike for the road. Up front the big O delivers a set of USD forks that are fully adjustable and hold radial Brembo calipers clamping twin 320mm discs. The rear end is composed of a box section competition swingarm that is light, stiff and features Superbike chain adjustment; all of which pivots on a Progressive linkage with fully adjustable Öhlins monoshock. Not finished there Ezikiel tidied up the electrics, rerouted some of the main wiring harness and fitted a Shorai Battery. To keep the Duc road legal and maintain its low weight the big factory brake and indicators are all replaced with small LED items. Then comes some of the big fruit, yes this baby has more tricks up its sleeve, the wheels are 10 spoke forged aluminium items that bring those scales down even further and with reduced unsprung weight comes all of the additional handling and braking benefits. But perhaps the pièce de résistance are those six straight cut gears and the race bred dry slipper clutch. Whether you’re clutchless shifting up the box or hammering the gears back as you brake hard for another bend the orchestral perfection and violent precision just make you want to do it over and over again! Having lost one Ducati to the road Gods, found temptation in a small Honda and then be drawn back and begged by the 749r to be modified the final result is a café fighter that couldn’t have been better built for the San Francisco roads if you tried. Life has a way though of making you jump through some hoops to get there, but Ezikiel has more than a few coast roads to carve to make up for the heart ache he suffered along the way.