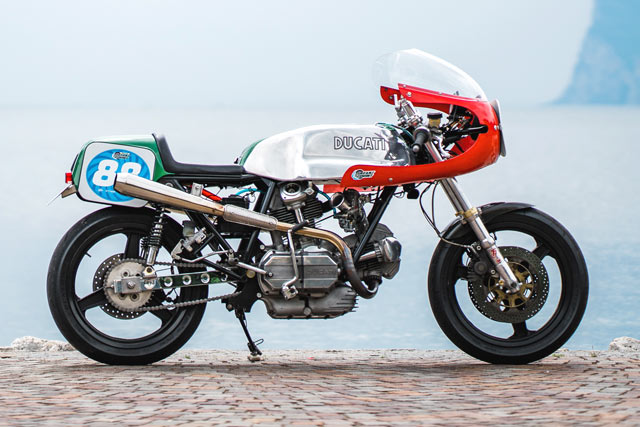 Like most forms of racing, Europe’s Sultans of Sprint series is full to the brim with enough cool bikes, stories, characters and sights to last you multiple lifetimes. But for the 2018 season, there’s one story in particular that has really stood out for us. Born in Nagasaki and a sworn Ducati fanatic, Toshiyuki Kozaka swore to himself that one day he would build and race a classic Ducati in Europe. 12 long years later and what do you suppose he’s gone and done? Say ‘ciao’ to the ‘81 Ducati 900 MHR called ‘Senna’. “I opened my shop in 2000,” smiles Toshi, as he reminisces. “It’s in Kumamoto, the southern-most island in Japan. I sell and maintain bikes from makers all over the world, but I specialise in Italian motorcycles. I started riding motorcycles in my small hometown outside of Nagasaki, Japan, at the age of 18 and then I had my first encounter with a Ducati when I was 20. They are the reason why I transitioned to bigger cc bikes.”

Toshi’s first encounter with a Ducati was the reason he fell in love with the brand. “It may have been serendipitous, but it was love at first sight and I knew I had to own one. After that encounter, my life and work with Ducatis began. It was then I realised the vast difference between how Japanese and Italian bikes were made. It really opened up my eyes to just how different two bikes could be.” Toshi describes the bike as his vision of a 70’s Bevel Cafe Racer concept. “The donor bike was a 1981 Ducati 900 MHR Mike Hailwood Replica. ‘Ducati Type Senna’ is the name I have given the bike. It’s obviously named after the great Aryton, but it also comes from the Ducati 916 model Senna. My previous Ducati build, ‘The Silver Shotgun’ also has its name adapted from a 60’s 450 Ducati racer. It’s my way of showing respect to the Ducati brand. It’s a tribute to my son, also named Senna, who unfortunately couldn’t join me in Europe this year on the Sultans of Sprint tour. It’s a way to connect both Senna’s, I suppose.” [superquote]“It took 10 years and many trips to Italy to find the exact wheels, suspension and swing arm I was looking for”[/superquote]

The bike was found by Toshi at a car shop in Nagasaki. It was so rare to find such a bike for sale, he now thinks it was fate. “The day after I found it, I realised I had to have it and bought it immediately. The 70’s-era styling is what really captured the essence of Ducati for me. It was my dream to take this bike and race it in Europe someday. It took 10 years and many trips to Italy to find the exact wheels, suspension and swing arm I was looking for so I’d have the aesthetic I wanted. Once the parts were collected, the build itself took two years from start to finish.” “This build was a way to connect me to my first Ducati custom 20 years ago; in fact the seat and tank are from the very same bike. You could think of it as a collaboration with myself when I was 24 and now at 44. For instance, the original frame on the MHR was red, but I couldn’t change it 20 years ago, so this was my opportunity. And my skills have also developed greatly since then; I even re-engineered the entire wiring harness from the ground up.”

The original engine had done about 40,000 kilometres before the full rebuild, so Toshi wanted to change out the crank and bearings. But he didn’t stop there. High compression pistons were added, along with a full head restoration, a new cam shaft and twin Keihin FCR 41 carbs. Besides the engine, other major updates included new Ceriani front forks, Koni rears and Dynamag wheels. Toshi reports a top speed of 230km/h (142mph) and around 85 horses at the rear. “The engine was a little tricky; the shim adjustment is particularly difficult on bevels, so I took a lot of care with them. I was trying to create a light weight engine that had minimal loss of friction for maximum performance. Also, the overall balance was important for creating a bike that captured the essence of both the Italian and Japanese aesthetic. For that I thought through how everything I did would effect the Ducati’s appearance, right down to the individual components.” “Riding this racer is the most fun I’ve ever had on any machine. I’ve never ridden anything like it before. It really takes someone with an eye for Ducati’s to realise exactly what I’ve done here. To me, it’s a perfect example of a Ducati. I still think there is room to improve and make it even better in the future. For me, it’s still a work in progress and never complete. Like myself, it will mature, get better and can always be made better. Good things always improve with time.”