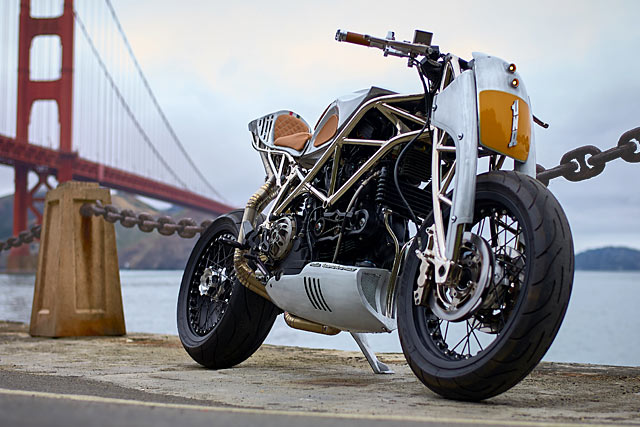 “I had bought, ridden, tracked and crashed more than a few Ducatis,” says San Francisco’s Alessandro Borroni. “I felt that they lacked the soul and aesthetics of a bike that would make me want to get on and ride again and again. But there were parts of some Ducatis I thought were worth saving. Then one day I saw a Shinya Kimura custom and fell in love with the idea of doing a raw aluminum cafe racer with an exposed frame and integral, air-cooled motor. I had some ideas about how to do the build, but I knew I would need assistance from friends. Many friends.” The build’s main elements are a ’06 Ducati 999 frame and a ’08 Ducati Monster S2R motor and swingarm; everything else is completely hand-made. “The bike is named ‘UNA,’ Alessandro continues. “I’m from Milan and in Italian, bikes and cars are females. I knew also that this build was going to be very unique. ‘UNA’ means ‘one’, but in the female gender. I also had got creative and drawn out the number ’1’ as the letters U, N and A stacked on top of each other, as you can see on the front plate.”

Al sourced the bike with the help of Johann Keiser from Motomotivo, who builds Ducati-based café bikes using the 999 frame and tank and pairing them with the Monster air-cooled engines and trellis single-sided swingarms. “We found a beat up Monster and took the engine and swingarm from it, and then sourced a 999 without an engine and used the frame and tank,” he notes. “The inspiration for the build came from a drawing of an old art-deco electric locomotive that Pierre Terblanche, the designer of the Ducati 999, had shown me once. He started with the double stacked headlights of this particular locomotive, and that’s how he came up with the face of the 999. I took this idea and ran with it. I wanted something very machine-like. Not pretty, almost alien. And with a very thin body, but with the power expressed in an oversized rear tire and a low front, high back look. I decided that the trellis structure had to be repeated all the way through, which meant no more tube forks.”

[superquote]“I decided that the trellis structure had to be repeated all the way through, which meant no more tube forks.”[/superquote] The build process involved many people, and Al’s not embarrassed to admit that he ran out of time, talent and space to do it all himself. Indeed, he says that the best part of the build was getting to know all the amazing talents the he sourced to help out. ‘I ended up with something that carries the touch of many. If I were to do this again, I would want to try to do it all myself. But as it stands, I couldn’t be happier at how the whole five-year adventure panned out.” So Al and Johann kicked off the first version of the UNA cafe racer in North Carolina. They both loved the 999s and things were looking good. “Then, after commissioning the bike, I moved to California and I needed someone to help me form aluminum sheetmetal for the bike. I met Ian Halcott from Twinline and we went to work on the making a body and fork covers. Once he was done, we shipped them to Johann over in NC, and he finished version one of UNA in time for a big Ducati meet-up I was organizing.”

“Next, we shipped UNA to the west coast and started working on the trellis front end with Ian. At that point we decided to also make an aluminum tank that would fit more organically with the other body panels. Ian and I then took UNA to the Handbuilt show in Austin, Texas. This is where the amazing Jeremy Lacy came into the picture; he is a bike designer, builder, and all-round great dude. His vision and beautiful sketches got us closer and closer to the final product.”

“Then we needed to have the exhausts come up through the tail. Ian went to work on a beautiful titanium system, but before he was done he had to move to Seattle. At that point I met Todd Chamberlain, of Arlen Ness fame. Todd took pity on my half-finished project and said ‘I am going to be UNA’s finisher.’ I think he did this half out of pity, half out of the sheer challenge of it. Electronics. Suspension. Body panels. Todd finished everything. To celebrate, I rode her to the Quail Motorcycle Gathering in May, 2018.” “The hardest part of the build was not knowing what I needed to do to create the vision in my mind. I probably spent many, many times what the project should have cost. But the upside is that I got to know some truly amazing people along the way. What I love best about the finished cafe racer are the proportions. They came out exactly as I envisioned. Also, there are some spectacular details, like the quad-rotor discs from Beringer and the Kineo wheels.” But the question we were dying to ask was, “How does it ride?” “It’s amazing – but so, so different from a conventional tube fork bike.”