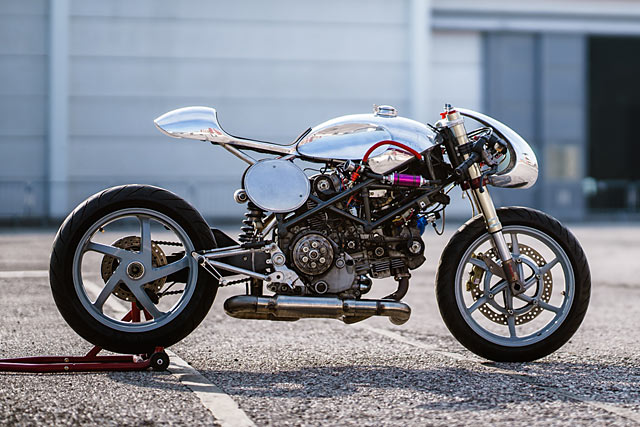 As the author of The Hitchhiker’s Guide to the Galaxy, Douglas Adams knows a thing or two about deadlines and the pressure they bring. “I love deadlines. I love the whooshing noise they make as they go by.” But while Adams may have missed a few, the only whooshing coming from Plan B’s sprint racer is the exhaust note crossing the line after another 8th mile win. With just ten days to go before the first event of the year this bike was a stock Ducati Multistrada DS with panniers. Come race day, Christian Moretti had worked his magic creating a nitrous slurping monster known as the Ugly Duck. [superquote]“With less than two weeks to the first Sultans of Sprint race the bike was nowhere near finished.”[/superquote]

Long time fans of Pipeburn and the Sultans of Sprint racing series will know Christian well from his incredible Plan B racer called Cherry Salt. The Buell powered creation was gorgeous to look at but for Christian it was simply too slow. So despite the weight and expense of powering up a Buell engine he took on the challenge of doing it again. This time the new dedicated racer would use an inverted Ducati frame and a turbocharged Buell engine. Sounds complex? It is and with less than two weeks to the first Sultans of Sprint race the bike was nowhere near finished. The workshop is a one man operation and Christian now needed the miracle of an NHRA team floating down from the heavens to help or, dare I say it, a Plan B. With Ducati’s starting to fill the grid with their lightweight in comparison to the other popular offerings from BMW and Harley, Christian got to thinking. “When I found the Multistrada it was for sale in Rome, 650km from home, but it was pretty cheap. So I convinced a friend of mine to go take a look at it.” The deal was done and it was shipped to the Plan B shop. Finally it arrived, a stock first generation Multistrada 1000 DS with hard cases, just in time for a registration photo to be taken and sent to the surely confused event organisers. “He’s racing what?” So why pick a touring bike as the basis for a drag machine just ten days out from the event? “My first build was a cafè racer based on a Yamaha XTZ Tènèrè enduro bike. I always loved this kind of ‘purpose changing’ work and I somehow wanted to celebrate that,” explains Christian, clearly a man up for a challenge. The Strada was quickly put up on the lift and stripped back with plenty of the stock 500lbs soon shed. With everything that unbolts gone, the next step was to cut the chassis back with only enough rear frame left to support the rider’s weight and no more. Chasing power is costly, but cutting wheels are cheap. Now with a bare canvas in front of him Christian got to work fabricating an all new body from raw aluminium, with lines not dissimilar to his Fireball TR-1 cafe racer. For most this would be an absurd thing to undertake with such a deadline, but clock counting down or not he was determined to arrive with a winning bike that looked just as good. The rear gives a beautiful narrow line and the entire section bolts on for easier access to mechanical components. The stunning alloy tank is in fact a cover for the ‘real’ two litre unit underneath, with the top section giving the bike a classic look that will never go out of style. The front could have just been given a number plate but Christian took the extra time to fashion the beautiful fairing. The lines provide a truly unique racer vibe with the added benefit of helping to push air up and over the rider’s helmet for better aero. The bike now wears its race number on two classic motocross boards mounted to the side of the frame and the thinnest piece of foam acts as the seat. To drop the ride height of the Ducati, a set of 748 front forks was fitted with some parts swapping required due to the Multistrada’s longer neck design. And planting the rear wheel hard into the pavement and soaking up the bumps is a Gears Racing fully adjustable rear shock.

[superquote]“The front could have just been given a number plate but Christian took the extra time to fashion the beautiful fairing.”[/superquote]

That power comes from Ducati’s trademark L-Twin with 992cc of capacity and 4 valve Desmo heads, but this one spits out a hell of a lot more power. To ensure the beast is fed a steady diet of fuel, a new external pump works together with an adjustable fuel pressure regulator. Under the tank the airbox has been removed and a set of large, tuned length intake trumpets draw from the atmosphere. But not to be let down by a lack of power this time around, Christian installed a nitrous system and the giggle gas gives the Ducati a massive punch. Then to finish things off, he set about building an exhaust system that not only flows best at the optimum RPM for racing, but places the bulk of the weight forward to help tame wheelies.

“I kept the original wheels because the front one is not that heavy and I didn’t have enough time to change the rear swingarm and wheel. The wheelbase of the bike is a bit short for sprint racing, but in ten days you have to optimise your time and energy, so I’ve built some strange looking clip-ons that make you lean more on the bike and move the weight more on the front,” explains Plan B’s main man. The stock controls remain, including the Brembo master cylinder and to reduce unsprung weight one of the twin discs and calipers has been removed. Then some basic ECU tuning was performed, Christian calls it the “redneck” method but it means the Ugly Duck is snorting roughly a litre of fuel per km. Now that’s a thirsty bird. But with no time to test nor even ride the racer, it was loaded up and headed for the first Sultans of Sprint event of the year. As he sat at the start line Christian realised he’d never tried the brakes, hadn’t pushed the button on the nitrous nor felt the bike react when the clutch is dropped. Looking down the 1/8th mile, selecting second gear to reduce wheel spin and sweating under his helmet he recalls exactly what went through his mind, “Why, why, why the fuck do you keep putting yourself in this situation?!” But he had nothing to fear, with the racer crossing the line with a win and only losing to eventual champion Amir from Mellow Motorcycles. It is a remarkable achievement that one man could do so much in just ten short days but for Christian, Plan B proved the way to go. “It’s the wrong bike, made in the wrong way, with the wrong amount of time, but it still feels so right to me!”