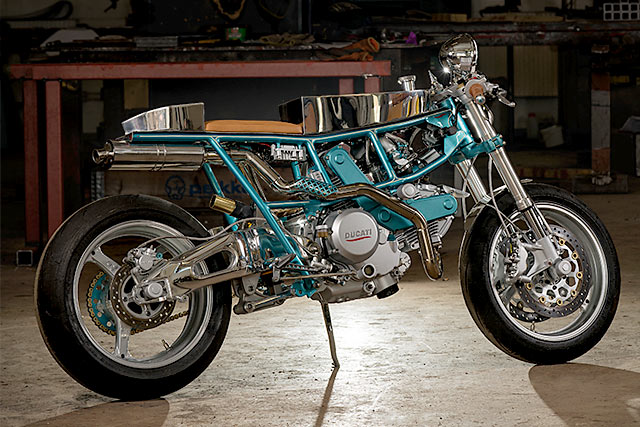 From the get go, it was clear to us that Johan Balsvik wasn’t your average custom bike builder. From his ‘Here’s my Ducati Pantah thing’ introductory email to describing his job as ‘Swedish railway development,’ we kind of suspected that the guy was a little out there. But little did we know… Here’s his latest custom bike – one that he describes as being inspired by “Troy Bayliss, Paul Smart, 70s coffin choppers and Picasso.” Meet the wild ‘Imola Homage’ Ducati Pantah 500. Johan Balsvik is a private builder, 56-year-old father of four, railway engineer and crayfish fan who has made and renovated pretty much everything he possibly could over the years: hot-rods, choppers, race bikes, wooden boats, street motorcycles and much, much more. However, he readily admits that he’s always relied on a kind of conservative thinking that ‘determines’ what things should look like before they are even built – but not any more. The bike’s foundation stones consist of an ‘81 Ducati Pantah 500 frame, an ‘02 Ducati Monster 750 engine and electronics, and an ‘06 Honda CBR1000RR FireBlade front and rear end. The end result of this wild mash-up would be a design that intentionally kept the Honda’s geometry in order for the chassis to move and behave properly. While Johan had clearly set out to do a little shock and awe-ing visually, he was determined that the bike’s handling shouldn’t do the same. The modifications began with what Johan calls an inverted ‘Denver bend’, referring to a Swedish motorcycle club that built choppers in the 70’s. Put simply, it’s when a builder cuts the lower frame tubes and bends the uppers to change the rake without having to modify the steering head. In this case it was to make the angle steeper, trying to get as close to the FireBlade’s 25 degrees as possible. Then the lower frame tubes had to be straightened to reconnect the steering head, while the front cross struts were moved backwards to make room for the Monster engine’s fuel injection. After much internal dialogue about what to do with the rear frame, finally he decided to leave it straight and placed the minimal rear lights inside the tube ends. Then he de-tabbed the frame and smoothed out the welds. Everything up front – including the wheels, brakes, forks and triple clamps – come from the Honda. The triple clamps are quite heavily modified, partly to look a little older and also to get rid of some of the protruding brackets. The remaining brackets and holes are now used as mounting points for things that they definitely weren’t originally intended for. He found nothing he thought suitable for a front fender, so he decided to make his own instead. The material is polished aluminum and the shape is a reflection of both the tank and the seat cowl, rounded at the front and pointed in the back.

And since the Honda swing arm is made to be mounted on the frame, there was no possibility to make it fit with the original Ducati engine mount. A Pantah has a fairly short swing arm, so a new mounting point behind the engine would have made the wheelbase almost 100mm too long. Johan eventually found an aluminum swing arm from a unnamed junker. He cut off the front end and joined it with the rear end of the Honda swing arm. A new 5mm steel bracket was constructed under the lower engine mount to handle the forces from the suspension linkage. But the elephant in the room is the bodywork. Make of it what you will, but clearly no one will be left unaffected by the shapes of the tank, tail and seat. What initially looks very square has far more advanced geometry than you may first think; you have to have several views around the motorcycle before you even begin to perceive the complexity. Johan says, “If you make something too straight, it will be boring. It might be perceived as straight, but it can’t actually be straight.” Both the tank and the rear cowling are a couple of centimetres wider at the top than at the bottom, giving the whole machine a distinct hourglass shape when viewed from behind.

[superquote]“But it’s the straight cutout for the seat that alarms most viewers. Tetris, anyone?”[/superquote]

The tank is then conically rounded in the front while the rear cowling has inherited its shape from the tail of cars like the Bugatti Type 35B. But it’s the straight cutout for the seat that alarms most viewers. Tetris, anyone? Moving on, almost everything shiny is made of polished aluminum and the paint scheme is an homage to the Troy Bayliss Imola Special, which in turn was an homage to Paul Smart’s classic Ducati racers. “The do or die moment for this built was to get the Honda swingarm to fit the Monster engine and the frame,” says Johan. “That was really tricky to solve. If I didn’t get that sorted somehow it would all have to go into the trash. The other hard part was to get the design of the body right and to find a design that worked with the inspirational pictures I had from 50cc racing and ’70s choppers. To get the flow of all the shapes to come together – the wide and narrow at the same time – that was hard.”

“For me it’s a happy bike, when you see it you smile and wonder, ‘what the fuck is that! What has he done?’ And then you smile again and realise that somehow, it works. And the mixture of different inspirations have all joined forces in this bike and it’s a happy, crazy design that works – for me anyway.” Well not just for Johan, actually. The Pantah won third prize in the ”Best Street Bike” category when it was first presented at the Elmia Custom Motor Show, and then took second prize in the ”Race Class” at the subsequent Norrtälje Show. Who would have thought that Picasso, ’70s choppers and the Swedish railway could make such a winning team?