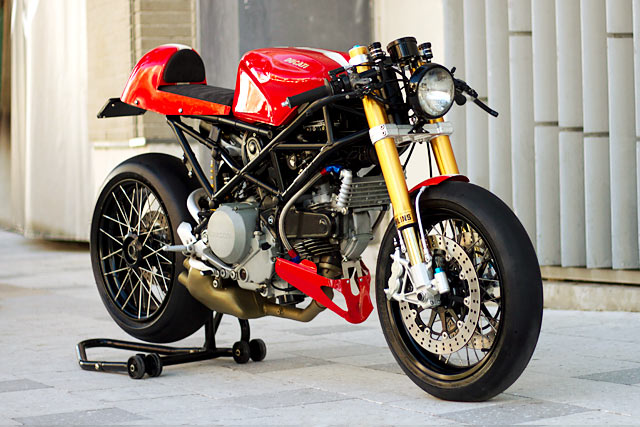 Ducati’s mid-noughties SportClassic, designed by Pierre Terblanche and based on the ludicrously beautiful Ducati MH900e, remains one of our all-time favourite factory creations. There’s only a handful of affordable bikes that you’d kick yourself for not buying, but the SportClassic is definitely one of them. With their prices barely dipping below showroom values since their release, it’s probably fair to say that they’re well on their way to becoming a classic in more than just name. But fear not, as Miami shop Cohn Racers has a solution – your own sport Ducati cafe racer made from the much more reasonably priced and infinitely more customisable Monster S2R. Hot on the rubber heels of their recent Muscle R Harley XR1200X, son JR and father John are clearly not resting on their laurels. “This is a cafe’d 2008 Ducati S2R,” begins JR. It’s a limited run series of 10 bikes which we call the ‘Agile’ cafe. This is bike number three in the series. It has been the most in-demand bike we’ve ever built and we are edging closer to reaching our goal of building ten bespoke examples by 2019.” “Most of these bikes have been seriously abused and neglected, so finding good donor bikes is a difficult task.  We searched nationally for many weeks and after looking at several bikes we ended up finding a really clean one that had been very well taken care of by a gentleman near Orlando. He even had a very nice S4R but unfortunately it was not for sale. Our next Ducati will be based of an S4R for sure.” There were many media sources saying that the Ducati Monster was an instant ‘classic’ when it came out, so the irony of it sitting alongside the SportClassic in the showroom is rich. Never the ones to avoid shaking things up, the boys consciously avoided a warm-over and went hard. “Clearly we were inspired by the whole cafe racer genre, but we set our sights on doing something we really hadn’t seen done before with a Monster.” Early in the design process, it was decided that both JR And John really wanted wire wheels. “They are rare to see on the Ducati single sided swing arms, but the really gives the bike that vintage cafe racer feel.”

[superquote]“You can convert it from a solo seat cafe to a biposto. It’s great if you want to earn some family points and take your better half out for a spin.”[/superquote]

Cohn always start with clean, low mileage bikes as their first port of call. “Next we strip and cut the factory frame and weld our own subframe. Then we design a new seat pan and upholster it with genuine Alcantara courtesy of our friends at Relicate Leather. We replace the plastic Ducati tank with a proper sheet metal unit and make the new rear tail section and the front fender both in sheet metal.” JR says that it takes about 30 hours to hammer out and smooth the curves on just the tail section alone. “The neat thing about this tail section is that it is removable; in a matter of seconds you can convert it from a solo seat cafe to a biposto. It’s great if you want to earn some family points and take your better half out for a spin.” “The bikes also get a full front end conversion using Ohlins forks and Brembo brakes with 320mm rotors. For this we use a custom machined triple tree with custom clutch and stainless brake lines. The new custom wire wheels are ordered four months in advance from Borrani in Italy.” As with their Harley the engine is mostly stock,  but there has been some solid tuning undertaken for better engine response and smoothness. “We also customize and coat the exhaust. Tuning the electricals saw us custom modify most of the stock harness and use our custom-faced speedo, LED turners and a brake light that’s integrated into the license plate frame.” “Ducati’s have a bad reputation for being highly strung and hard to work on, so we were not optimistic. We had a hell of a time figuring out the electronics on it and this was probably the hardest part. Getting rid of the immobilizer, accommodating the new speedo and relocating the battery was quite the task. Figuring out the removable tail section took a lot of trial and error too, but we think it came out really nice and practical.”

JR and John are quick to name the bike’s new-found nimbleness as their favourite trait. “We removed a lot of weight from the Ducati and it shows. It feels incredibly light. It cuts through corners nicely. It stops on a dime and if you aren’t careful it can bite when coming out of the corners with too much aggression. We like that, though. The bike also looks like a million bucks; sleek and slim but with a mean stance. Some think it’s a naked superbike but then realize the tail section is deliberately there to look the ‘cafe’ part. All in all, it’s a very tricky little bike that has us feeling very proud and happy.”