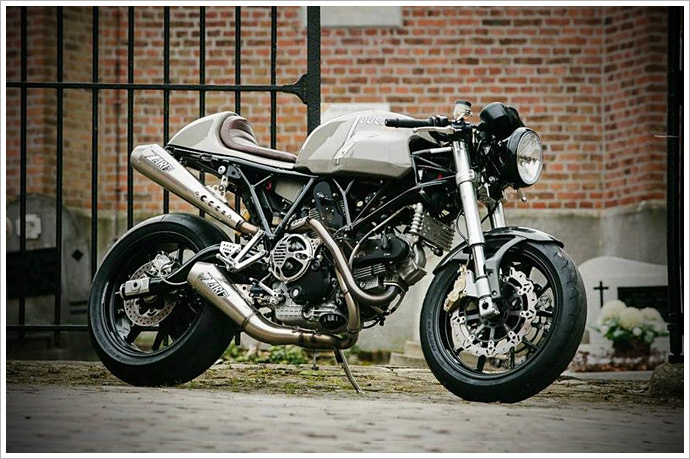 Some things I can’t bear the thought of parting with, because they might be of use at some point. At least that’s what I think every time I am in the shed and trip over my roof mounted taxi sign. Andy, of the Flying Hermans MC, thinks along the same lines, and this has culminated in this beautiful machine you see before you. This Ducati Sport Classic 1000 has risen from the ashes, having been crashed, written off and rebuilt all in the space of one year. And it is better for the whole experience. After having an off while on a ride last year, the bike was written off by the insurance company, and Andy couldn’t bear to part with it. In order to be able to get the bike on the road again, Andy started by liberated some parts from a Paul Smart 1000 Limited Edition. The frame from the LE was painted up in black, replacing the famous factory green of the model. A PS1000LE fuel tank has been fitted as well, although some modification was made due to Andy’s bike not having the steering damper or fairing mounts fitted to the LE model bikes. One cool touch is that during the process Andy has added a fuel level window to the tank, an idea which harks back to Paul Smart’s halcyon days. Aesthetically, the bike is far removed from how it left the Ducati factory, with Andy putting a lot of thought, time and effort into the build.  Some of the time and effort was spent fashioning the ducktail at home, with the seat upholstered by Motokouture. Clipons from Speedymoto and gauge height adaptors ensure the lines of the bike stay clean from the back to the front. A bare bones look has been chosen for the engine, quite literally. With an open clutch cover from Dpm, and transparent belt covers from Rizoma, you can see the inner workings of the desmodromic powerplant. Pointing skyward, the silencers make up the tail end of a Zard full titanium exhaust system.

The aluminium wire spoke wheels the Duc left the factory with are gone, in their place are Marchesini rims from it’s stablemate 999, and in doing so has dropped the kerb weight of the bike. Still going through the Ducati parts bin, a set of Brembo four piston calipers from a Ducati 998 help boost stopping power. Andy’s attachment to his bike, even in it’s post crash state, has motivated him to build something far superior to the factory Ducati Sport 1000 product. 70s styling cues, wrapped around a modern day Italian thoroughbred, make for one hell of a pleasing final product. All from a bike, which a year ago was a mangled and broken wreck. Goes to show you should think twice before parting with anything, because it might just be of use, and turn out to be more valuable than you thought it would be. Still have trouble justifying my taxi sign though.