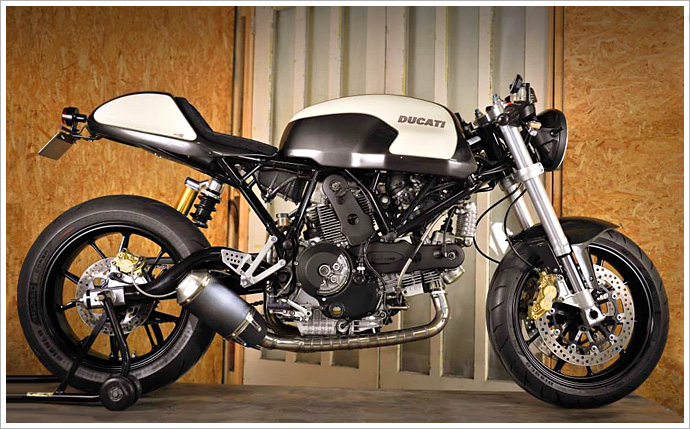 In the custom motorcycle world, there is a tendency towards ‘feast or famine’ when it comes to trends. Modern Triumphs, classic Beemer airheads, and now the rise of the Ducati Sport Classic. Today’s feature bike is another take on this model, with the brief being that “the owner wanted the chubb taken off, but wanted it to visually remain a Sport Classic”. And ShedX were just the workshop for the job. Keeping the lines given to it in Bologna, this ultra clean ride has been built to give the owner more of a sporting chance, without turning the bike into a track day special. Utilising the Ducati parts bin, as well as their own product, Neil from ShedX has produced a beautiful bike that is much more ‘feast’ than ‘famine’. After seeing ShedX’s first build, ‘Bastardo’, a customer handed over his stock Sport Classic, requesting the tank, headlight and rear profile look standard. The rear profile caused the most issues, with two aftermarket tailpieces being rejected before ShedX took it upon themselves to make one themselves. The ShedX tailpiece is slimmer than stock, and hugs the standard (albeit detabbed) subframe so no modification is required for fitment. A suede covered seat piece made in house rounds out the tail section nicely. Sitting under the new cushion is an EarthX Li ion battery, the bulky stock battery and battery box given the flick. The exhaust system, according to the customer, was to not rise above the curve of the swing arm, and couldn’t be an off the shelf product. To achieve this, a custom two into one system was fabricated in house. The factory airbox is gone, having been replaced by pod filters. To give the bike an old school look, the meter cluster has been made by ShedX to look similar to the 70s Ducati SS. Flanking these are a set of 1098 clip ons, which work nicely with the stock Super Sport headlight. In relation to handling, a few mods have been made. The “stock under whelming factory front end” has been swapped out for a set of 999 forks and triples. Keeping with this idea, a set of 999 rims sit in place of the spoked factory offering. Front discs are 1100S Multistrada S, calipers both front and rear are Brembo Goldline. The dark rims set nicely against the deep metallic grey, off white panelling and gold striping of the machine. ShedX had accomplished something beautiful in this build. Through using factory componentry and their own accessories, they have produced a bike that could almost be a factory special. Lighter, better handling, yet still showing those Sport Classic lines which we all know. It’s this sort of high quality build that should never go out of fashion.