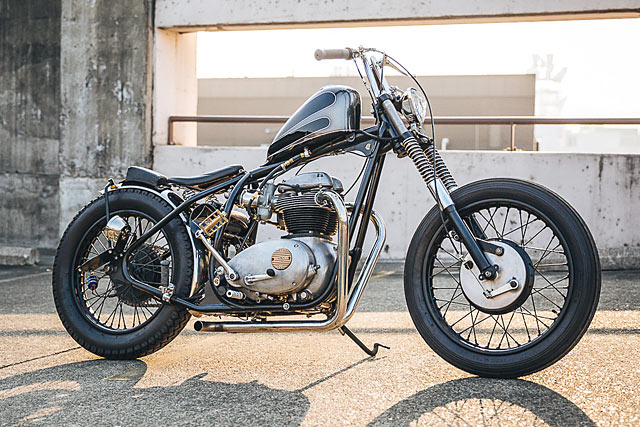 In the late 1950s Lucas, a large Birmingham UK-based manufacturer who built electrical components for the automotive industry, made a drastic change that would send waves across the industry. The days of the dynamo/magneto were over and coil ignition was in; sixty odd years later they’re still going strong. So while many would succumb and fail, the good gentleman down the road at Birmingham Small Arms embraced the challenge. What they produced all those years ago provides the heart of this brilliant Oregon-based Bobber. Forged from the hands of David Bright, it’s a 1965 BSA A50 that takes its name from your first unfiltered reaction, “Uhh Yeah Dude”. For David it’s also time for a change. “Up to now, all of my bike building has been for fun, you know? Building a bike for myself or helping friends with their builds; hanging around old crusty biker-types just trying to soak in some of their old motorcycle wisdom. But I’m currently trying to “gauge the level of enthusiasm” for parts or bikes I might be able to make and sell. We will see…” And this Bobber is his opening salvo to show the world just what he’s learnt along the way and how capable he is when building a total custom machine. The donor bike was found in Bend, Oregon where it had lived its life as a Desert Sled, like many of the A50s that had come across the pond. Scrambler-style seat, knobby tyres and with high pipes, it had the right vibe but on David’s first ride the motor went bang. That engine was the result of BSA engineers having their hand forced by Lucas to use the new coil style ignition. This meant an all new engine design made perfect sense to adapt and with the opportunity they switched to full unit construction, providing a cleaner looking engine, with less oil leaks and a smoother ride. To rebuild his now deceased full unit motor, David turned to “Fairly Honest Dick” at DJ’s Cycle Shoppe to guide him through the process. As part of the job the call was made to add some extra cubes, a sensible and timely decision with the engine in bits. Jugs from a 650cc A65 gave a healthy boost and bolt on to the original cases. The racing version that had been sent to the US in the ’60s sported twin carbs and the change made perfect sense to feed the extra CCs. Finished off with machined velocity stacks they complement the rest of the engine that was rebuilt to the highest of standards and accentuated with subtle brass accents. The high pipes just wouldn’t work on a bobber build and thank god, because the replacement stainless units now flow perfectly with the frame. Of course that frame had come from the factory as a double cradle loop with swingarm equipped twin shock rear end. Perfect for racing the bad lands, but nothing like the simple beauty that a bobber has to offer. Easy solution. With the grinder fired up, David ‘hacked’ off the rear section and prepared it for a hardtail conversion. Of course he could have bolted up one of the many universal kits, but this BSA was destined to be built the right way. His pal Larry Kitchen happens to know a thing or two about such engineering projects and the main frame loop was bolted into his custom jig. Together they’ve done a brilliant job incorporating a rigid rear end with none of the bolts and bits you get from anything but a full custom fabrication. The upper wishbone tubes merging seamlessly at the backbone while the lower pieces join the double cradle with extra bracing for increased structural integrity. [superquote]“It’s basic chopper building crap. Cut off everything not being used”.[/superquote]

Before it was painted up, David was back with the grinder. “It’s basic chopper building crap. Cut off everything not being used and sometimes cut off stuff you thought you wouldn’t use, just to find that you did want to use it,” he laughs. In typical bobber fashion there is no front fender, while out the back a tyre hugging item provides just the right amount of protection. It’s been fixed to the frame with handmade struts using a hidden bolt installation for the cleanest of looks. But what really captures your eye is that high-mounted tank sitting up Frisco-style in the breeze. It was a design element built heavily on the influences from David’s motorcycle education. “I’ve always been into the rides the guys had in the clubs of California from the 50’s through the 70’s and the Frisco-style choppers definitely had an influence on this one”. To get the look Larry was again lending a hand, taking a classic Sportster tank and cutting 2″ from the centre and 1″ off the bottom to get it riding on the backbone.

While Larry was welding, so was David. Taking a 6″ steel tube and welding in end caps in an inverted fashion for a trick looking oil tank. With both sporting custom fillers and classic chrome caps, the oil tank’s sits proud on an elevated neck. Then the two pieces were sent for paint to Jimmy Skinner, who has quite simply knocked it out of the park. The colour scheme’s a perfect combination of British BSA tradition and classic West Coast Americana. Finishing it off with a kick, pinstriping legend Mitch Kim laid down by hand his signature artwork with fastidious detail. There’s not a single blowout, no matter how hard you look.

Now David could begin the process of building the bike back up, adding all the little touches that make it his own. A chrome sprung solo seat and harlot pad on the fender are both stitched in black leather in a tuck ‘n’ roll style. Machined pegs for the rider and foldable items for the pillion get the job done, with the kick-starter adding a little flair thanks to its brass pedal. The narrow bars, with incredibly neat mitre cuts, give that classic Cali look David was going for. Sporting only the basics in period correct levers and Amal grips, it’s all about keeping things simple and clean. [superquote]“Which is exactly what David is doing; riding around town, having fun and enjoying the fruits of his labour”.[/superquote]

Adding some more British-style points and giving a vintage touch, the front forks now have their coil springs exposed. With the Aris-style triangle headlight and cable-operated drum brake all ensuring continuity is retained across the build. The rims have been relaced and painted black and all wrapped up in vintage rubber. Ladies and gents, ‘Uhh Yeah Dude’ is ready to ride. Which is exactly what David is doing; riding around town, having fun and enjoying the fruits of his labour and skill. The BSA definitely answers his own question. He can build a bike that turns the enthusiasm dial to ten. So not stopping there, he’s already commenced a 1950 Triumph based project for The One Motorcycle Show in Portland, ensuring this isn’t last time you’ll hear the name David Bright.