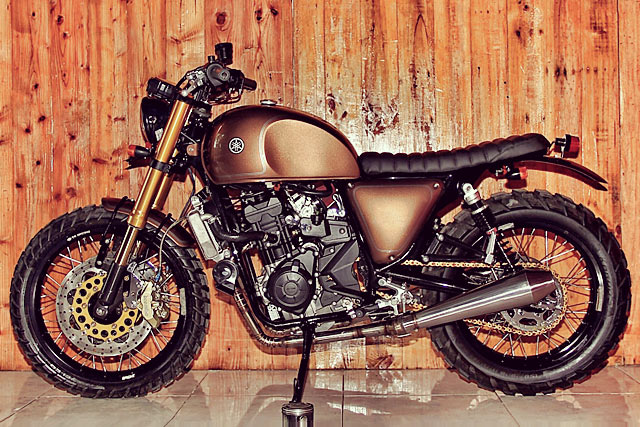 As with the Sports Utility Vehicle craze of the last few years, it’s easy to write off the current Tracker and Scrambler rage as a triumph of style over substance. After all, where’s the corresponding boom in off-road riding to justify all these knobby tires and high pipes? The answer is that most of the bikes are only being ridden on the road. But what if you lived in a country that wasn’t strangled by parking lots and overpasses? What if instead you lived in a tropical paradise where off-roading was not a hobby but an everyday occurrence? Welcome to Indonesia and the world of Donny Ariyanto and Studio Motor. Time to meet his rather elegant solution to the challenge; a wanna-be sporty Yamaha R25 that now couldn’t be better suited to its surrounds.

Donny starts recounting the bike’s build story on a comical note. “The customer brought his bike into our workshop. We asked him what he was after, and he was quick to tell us that he wanted a bike with a comfortable riding position, classy looks and a classic style. And the bike he brought with him? A 2015 Yamaha YZR-R25 sports bike…” After Donny and the team stopped giggling, they started to throw around some ideas. “Maybe this request wasn’t as crazy as it seemed,” says Donny. After a quick look at the Studio Motor website, Donny and his new customer settled on a scrambler build. “We were excited,” says Donny, “As scramblers are our current favourite bike.” Hands were shaken and work was commenced. Naturally, they started by removing all the plastic. One mountain of ABS later, and they were staring defeat in the eyes. “The bike’s factory frame was pretty much the exact opposite of what we needed. It would have been easier to just use the engine and build our own frame – so that’s exactly what we did.” One the frame’s basics were in place, they swapped out the original rear shock for a 360 mm YSS Z-Series springer. “Then up front we mounted a set of 53-42 mm upside down forks that will really improve the handling. And to go along with this, we replaced the very average-looking original wheels with some TK Japan Rims in 18×3.00 and 18×3.50″ units, and then wrapped them in Metzeler Karoo 3s, with 120/80-18s at the front and 150/70-18s for the rear.”

Next, came the brakes. To update the bike’s ‘not hitting things’ performance, Donny mounted some Brembo twin disc, twin piston stoppers at the pointy end and a single disc (but still very capable, thank you) Nissin caliper at the rear.

Then came the body work. Now, mere mortals like you and I might be more than a little intimidated by the prospect of making a full set of bodywork from scratch. But as fans of the shop may already know, Donny’s speciality is forming handmade panels out of galvanised sheet metal. And yes, you read that correctly. Galvanised. “So we made up a gas tank, some side covers and a tiny front and rear fender from 1.2 mm gal sheets.” And while we wouldn’t mind seeing the raw results of Donny’s metalworking magic, alas and alack the bike had to be painted. And, as always, the choice was simple. “As for all our bikes, we had Komet Studio in Jakarta do their thing. We choose a metallic dark brown from the Sikkens catalogue and then decorated the results with a clean, understated silver line.” With the build almost complete, Donny took to applying the finishing touches with gusto. “We chose some Fatbar risers and a set of ‘bars specifically picked out to make sure that the bike’s new owner got that comfortable riding position his old R25 wasn’t able to provide.” Lastly, a quality 5″ aftermarket headlight was wired to the front and a custom-made 2 into 2 exhaust was selected to add a little bark to the new bike’s modern classic bite.

We’re not sure about you, but we’ve been scratching our heads trying to think of a more impressive recent metamorphosis and, although we’re the first to admit that our short-term memories aren’t what they used to be, we’re coming up empty. From try-hard crotch rocket to stupendo scrambler in the blink of an eye? Now there’s a craze we can get behind.