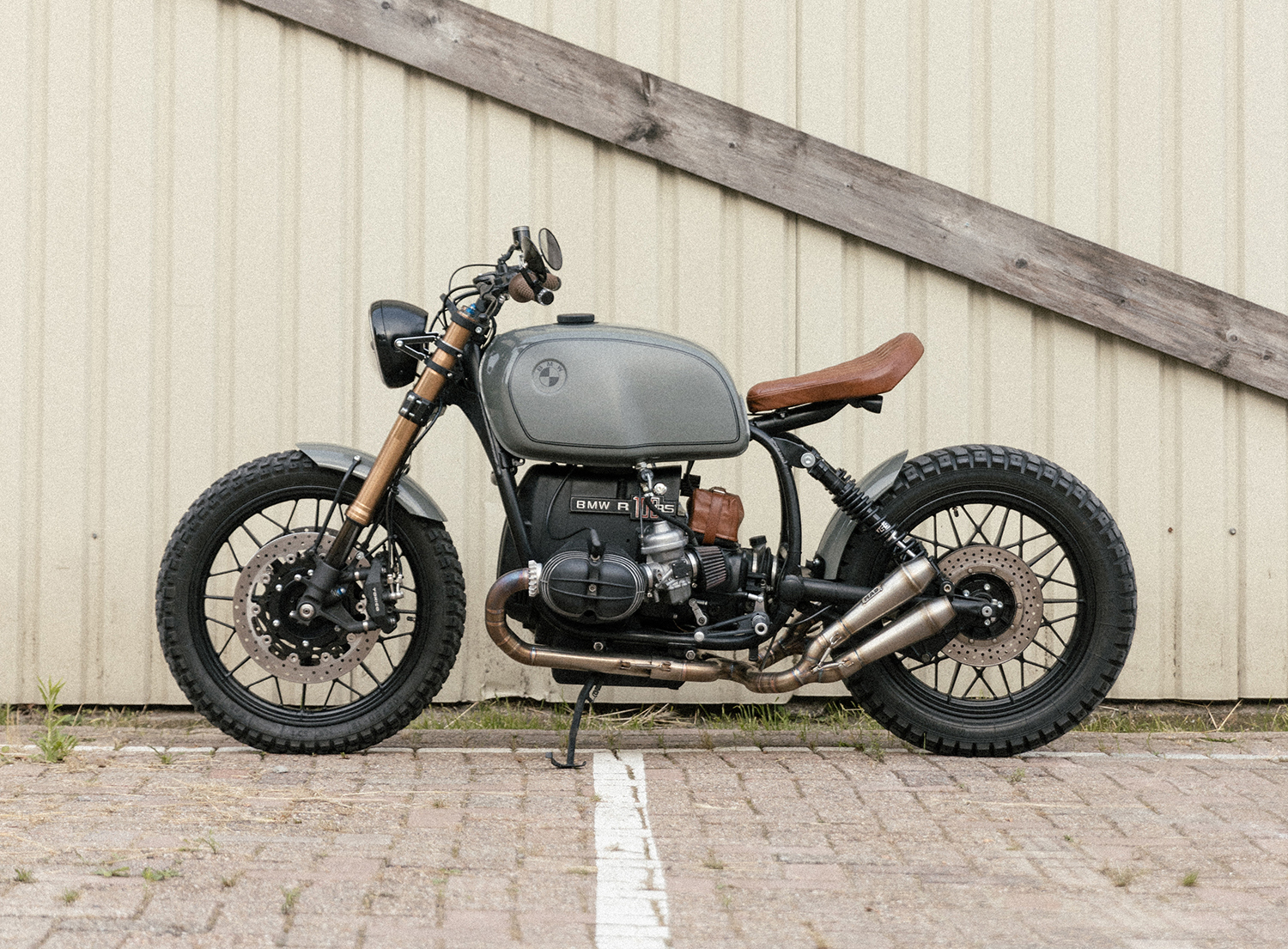 One of the often heard and uneducated opinions of those who love motorcycles but can’t stand the custom scene is that “the bikes have lost all functionality”. So while it is true that some customs are deliberately designed in such an over the top way that their street use is limited. Others in fact go in the complete opposite direction, providing all the good looks and individuality in a package that does just about everything better than the original product. When it comes to such masterpieces, veteran builder Daan Borsje of Moto Adonis never fails to deliver. For a client with very particular desires and a clear idea of what a custom should be, he’s delivered a stunning BMW R100 that more than meets the dream.

From his workshop in the Dutch city of Roosendaal, we met Daan years ago now and he’s always combined exceptional design skills with a masterful mechanical touch. That applies whether he’s building a single part, fabricating one of his incredible stainless steel exhaust systems or building a bike from the ground up. Despite the crazy year we’ve all been living through, his reputation has kept the shop ticking along nicely, “The last few months we got an assignment to build a custom bike for Mr F. The mysterious Mr F wanted a bike to match his critical and perfect image of his custom dream bike.”

For the basis of the build he selected a 1979 BMW R100RS, if you’re going to combine creative good looks with a machine that’s a beaut to ride, then the ranging topping model is about the best place to start. But even with the bikes envious reputation for being a bulletproof sports tourer, not a change would be made until it was completely stripped down and every last nut and bolt thoroughly checked. With the frame cleaned up and ready to accept the host of new parts, the first addition was the full front end from a K8 Suzuki GSX-R.

To make for an ultra-clean install and perfect geometry a friend of the shop, Roel from Scheffers Engineering, not only milled up a purpose built upper triple clamp but also included into it a mount for the Motogadget speedo. At the bottom end of the setup, the decision to keep the standard BMW wheels meant a bunch of clever modifications had to be made, including those done to accept a set of 310mm disc rotors from an MT-01, clamped by the Suzuki’s Tokico calipers. Completing the form and function conversion, an in house made front fender was then affixed with custom struts.

Moving to the rear and a similar theme is followed, good looks, high quality components and the sort of pieces required to maintain a bike capable of daily use. To control the swingarm and allow the bike to be set up perfectly for Mr F a set of YSS shocks, 420mm in length were selected. With the added bonus of being compliant with the strict road regulations of Germany, top quality and a plush ride are assured. The factory brake remains with the caliper positioning providing an uber clean finish and rebuilt, operates a treat. “We then made the handmade rear fender and the baseline of the bike was finished.”

Now Daan could turn his attention to making the RS look a million dollars and the minimalist approach was adopted, with the factory subframe and big two-up touring seat given a wave goodbye! “We made a new subframe for the mono seat, and laser cut a seat pan which was then sent to Miller Upholstery for a nice leather seat,” he explains. That same high-grade leather was also used to stitch together a battery cover for a clean, high class finish. The colour carries over to the grips and with cloth-covered fuel lines another neat touch, you get an element of vintage to a bike that packs a lot of 21st-century tech.

“The complete bike was finished with a semi-gloss coating and the fenders and gas tank were painted in Quantum Grey. The side of the gas tank is matte and the rest in high gloss. We added the new 2020 BMW logo to mix the old and the new.” That theme continues with the electrics, the style of the headlight and ears attaching it might be traditional, but the construction is anything but with CNC’d alloy and LED lighting the way. The wiring was all pulled out and completely replaced with parts from Kellermann and Motogadget, the piece de resistance allowing Mr F to start the bike remotely from his phone, very James Bond.

With Daan also the man behind the incredible exhaust systems from MAD, there was no way the factory pipes would remain. Instead, the boxer twin is treated to a MAD Exhausts custom stainless steel system, “It turned out as a two in one in two in four system of high-quality stainless steel with 4 handmade short mufflers.” And combined with the DNA filters brings the BMW to life with a rip-roaring sound. To allow the gears to be punched through with a firmer click, the rearsets are from Tarozzi and another Moto Adonis build was in the bag. It’s easy to see why the company goes from strength to strength and even Mr F’s high standards have been met in the most exacting of manners and we have a feeling he’s grinning from ear to ear!