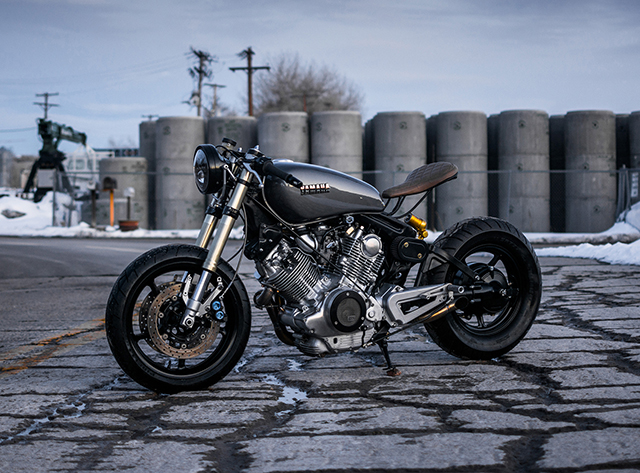 Over the last few years Yamaha’s venerable Virago has become an increasingly popular platform for customization, trumped by the likes of the CX500, CB750, and Dominator. And while it’s difficult to pin-down the first shop to treat the Japanese V-Twin to a bob-job, Colorado’s 485 Designs has undeniably played a pivotal role in demonstrating the merits of the XV. In fact, to say 485 specializes in Virago builds would be one hell of an understatement, with the two-man operation’s portfolio brimming with all manner of stellar bobbed Virago builds including turbocharged examples and specimens sporting single-sided swing-arms, just to name a few. 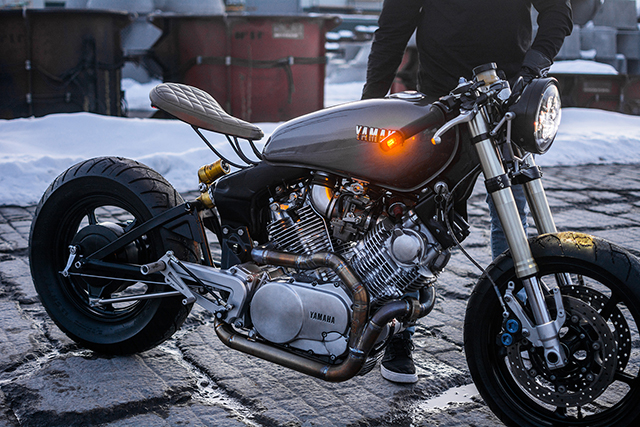 Headed up by 24-year-old Nick Mercer and located just south of Denver, 485 began the project picking up where the client had left off. “The bike was brought to us as a project, rolling chassis, not put together, and pretty much just a box of parts,” Nick tells us.

Wanting to bestow the Yamaha with the shop’s signature look that customers have come to expect, while still bringing something new to the table, Nick and Bob — the second half of 485 — began brainstorming possible means of implementing some novel elements into the XV. The brief from the customer had asked for a floating style seat, though beyond that the two mid-20-something builders were otherwise pretty much given carte blanche. 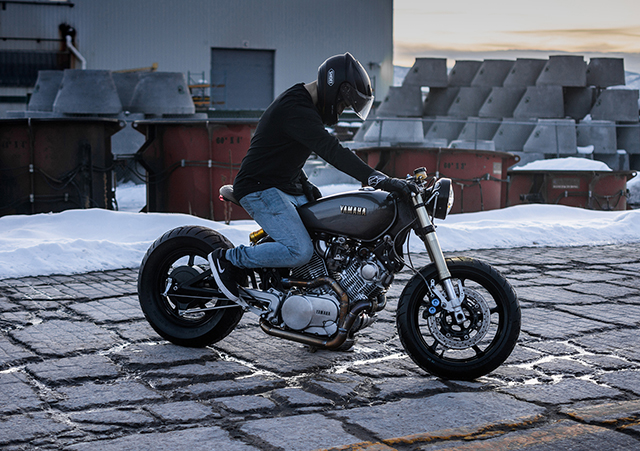 The duo’s answer came in the form of a unique subframe; a thick dual-wire arrangement that sees a tractor-style saddle mounted at an inclined angle, holding the rider firmly in place. Despite its leaf-spring-esque appearance, the new subframe is completely rigid. “This style hasn’t really been seen on a Virago like the way we’ve done it here,” relays Mercer. 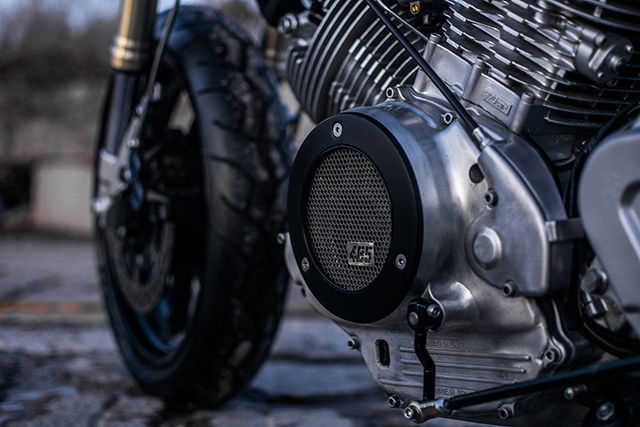 Wanting to bolster the Yamaha’s performance, the 485 boys have called upon the entire inverted front end off of an R1, complete with its dual disc setup and four-pot calipers (which are now linked to steel-braided lines). Out in back, the factory mono-shock has been jettisoned in favor of a modern, fully-adjustable Sachs item, plucked from a late-model MV Agusta. 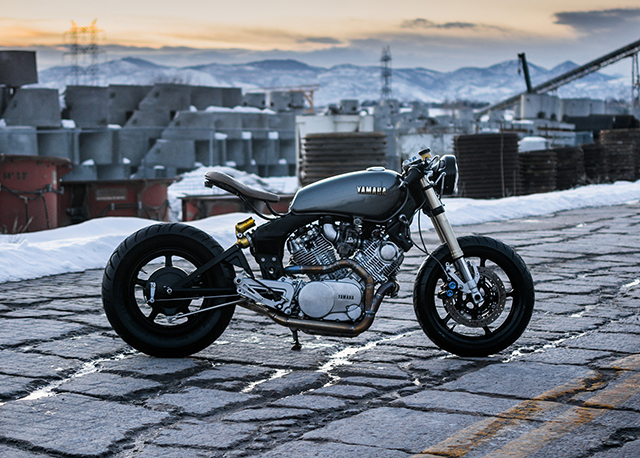 Next, the two turned their attention to the 920cc mill. Initially, a few replacements were in the cards, but upon closer inspection, Nick and Bob began to realise the situation called for more dire measures, ultimately resulting in a very thorough tear-down and rebuild. Once everything had been properly cleaned out and all the new seals and gaskets were in place, the two tacked on a set of custom meshed covers complete with 485 badges, before shifting their focus to the stock respiratory bits. 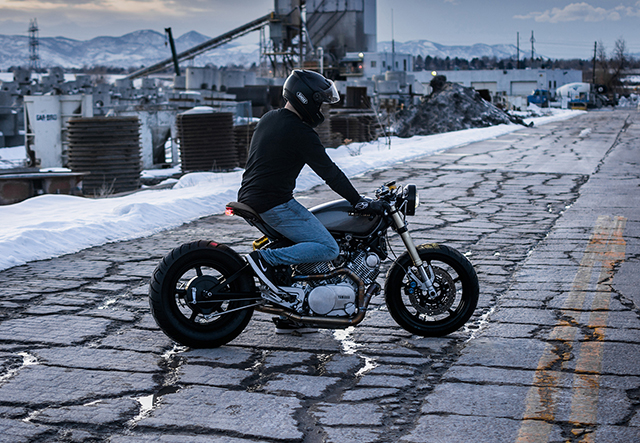 The thing now sucks through a Harley-style aftermarket cleaner that pokes out on the left side of the bike just behind the rear cylinder. Meanwhile, spent fumes are forced out of a fully-bespoke two-into-one system, routing around the right side of the bike and merging into a single pipe before culminating in a slash-cut mounted just beneath the swing-arm — a design that 485 is slated to soon start selling on its website, adding to its existing catalogue of Virago parts. 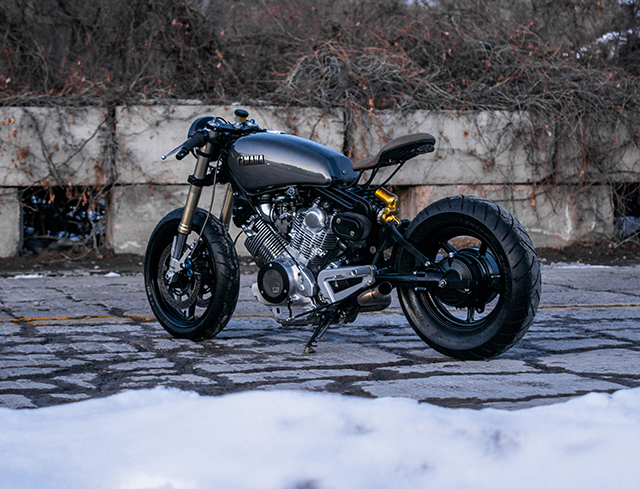 Perched atop the new subframe is a contoured bobber seat, upholstered in leather with a diamond stitch pattern while underneath is an aftermarket brake/tail light with integrated real signals. Out in front an LED headlight rests in a deep bucket that rests on a subtle yet incredibly unique bespoke bracket.

The overall riding position is now markedly more aggressive, with the entirety of the stock controls having been binned to make room for a new pair of rear-sets — held in one-off brackets — along with a new set of clip-ons that are now fitted with new grips and Rizoma-style LED bar-end signals. The battery is also hidden away in a one-off battery box. 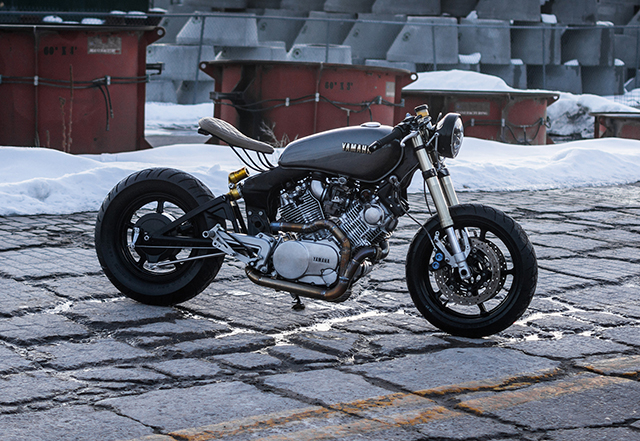 With everything is good-to-go, Nick and Bob began prepping the Virago for paint. Unlike some of their prior XV builds that employed a paint scheme that included brightly-colored or white frames, the Colorado customs outfit instead opted to go with a more traditional black powder-coating for the chassis, as well as on the bike’s five-arm alloy wheels, triple clamps, swing-arm, subframe, and headlight bucket. The build’s lone piece of bodywork — the tank — has been done up in a gloss gray hue before being decorated with NOS Yamaha badges. 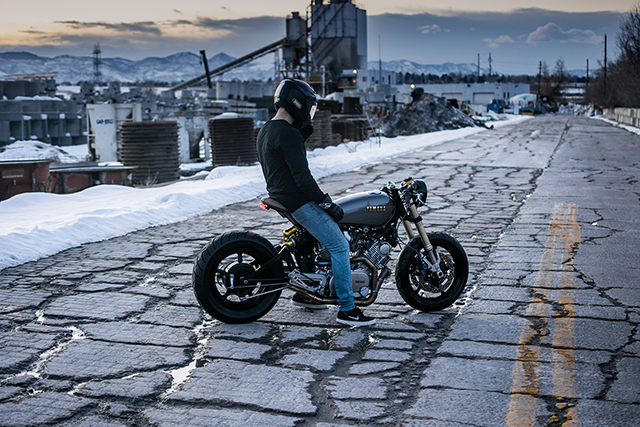 “We did all of the fabrication on the frame, seat setup, exhaust, front end work, and everything you see. All work done on the bike was 100% done in our shop, including elements that a lot of builders often outsource like painting, welding, powder-coating, and so on,” relays Nick.

While at first glance it may resemble yet another bobbed Virago, closer inspection reveals a myriad of fascinating little details. And though the bike has an undoubtedly minimalistic nature to it, a lot of work had to be done to get everything to look so tidy and unencumbered. It might not be the most novel custom we’ve ever seen, but at the very least it reaffirms 485’s status as something of the go-to guys for Virago builds.