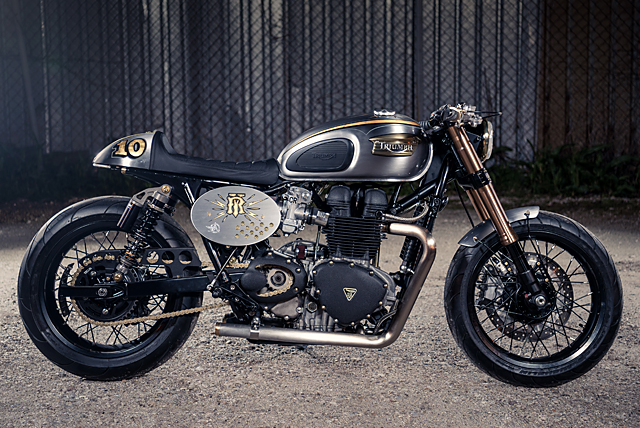 Blood, sweat and tears; it’s what most of us pour into our personal bikes. It never ceases to amaze us how a professional builder can turn out some of the most amazing work for customers, seemingly without blinking an eye, and then almost kill themselves by simply trying to build a bike that’s designed to impress no one but themselves. And as it just so happens, blood, sweat and tears are just the ticket for bullfighting, too. Keeping in mind the parallels, here’s a bike to finish off a pretty courageous week of custom builds here on la Casa deTuberías Quemadas. Meet Analog Motorcycles and their ‘El Matador 2.0.’ We spoke to Tony Prust, Analog’s el Grande Toreador and builder of the Matador to learn a little more. “I built a ‘72 Triumph Bonneville bobber about 3 or 4 years ago that I dubbed ‘El Matador.’ It got a great reaction and received a ton of press and feedback.” The fact of the matter is that it was actually Tony’s personal bike, and one that is still in his stable today. “I do not ever duplicate builds,” he notes “but when Rebel Yell Bourbon got a hold of me to build a custom bike for them, I figured it would be the perfect opportunity to do a new version of the beloved El Matador from the ground up.” So he took to his weapons of choice and got to work. His job was simple; to build a better version of a bike he thought was pretty much perfect. Tony found a Bonneville from ‘05  that was in pretty good shape. It had some aftermarket hop-ups on it, but as he was planning on stripping the beast down to its skin and bones, this was a moot point. So on the trailer it went. “I already knew that I wanted to do a raw metal and black theme with some brass accents. The newer Bonnie models have a lot more stuff on them than the stripped down bobber I had built before, so I experimented with real brass and a powdercoated brass finish I had used before.” As you can no doubt see the results are pretty cool, with various complimentary hues of brass scattered over the bike, giving it a very organic, almost embroidered feel.

He also wanted to make the bike perform and handle better than stock, and definitely better than his rigid ‘72. Knowing full well he’d have to ride the bike from the Rebel Yell headquarters in St. Louis to Sturgis for a show, he had a fairly strong incentive to get the bike right. “The bike needed to be fun to ride and able to handle whatever may be thrown at it on the way.” Tony started the build at the sharp end, and swapped the standard Trumpet bouncers with a sweet set of GSX-R triples and forks, and while he was up there he made the necessary modifications to run the stock Triumph front hub and rotor. He then laced both front and rear hubs to a new set of 17” rims, with some custom spokes from Buchanans. “To perfect the stance of the bike, I had a custom set of G3-S shocks made by Race Tech. I wanted to utilize some of the parts we offer at Analog Motor Goods, so put on a set of our number plate side covers, but I also gave them an extra special custom treatment. I also attached our A3T LED tail light assembly, but I trimmed about 4” off the stock Bonnie sub-frame first.”

He then dropped by the Triumph aftermarket powerhouse British Customs for a few more bits an pieces. Filling his trolley to overflowing, he scored a B.C. chain guard, billet clutch guard, lifter arm cover, tank knee pads and ‘Drag Pipe’ exhaust system. “I added the Lowbrow Customs brass tips to match the bobber. “I also had B.C .send me the CR carbs and we did the ‘performance cam swap service’ they offer. The engine was torn down and while in pieces, it was also wrinkle powdercoated in black. I milled out the sprocket cover, so it’d also more closely match the ‘72.” “Then I cut out a seatpan and hand-formed a seat hump with a brass covered trunk. Perfect for a tool kit, gloves or a bottle of water. And while I was at it, I made a steel front fender and fabricated some custom mounts for it.” The bike’s dash has a custom CNC’d speedo bracket that Tony had especially made to house a Motogadget Tiny Speedster speedometer. He also used the Motogadget M-switch minis, M-blaze pins, and M-unit to tidy up all the electronics. Shifting his focus back to the wheels, he used one of the 4-piston calipers from the GSX-R front end and paired it with a set of Beringer controls, ensuring that this charging bull is ready to stop whenever and wherever needed. Lowbrow Customs were kind enough to supply a set of their new knurled black rubber grips, a brass engine tag, and a Kustom Tech brass throttle assembly. Tony then used some vortex clip-ons and Speedy Moto’s Omni bars to get the handles exactly where he wanted them. “After everything was stripped and sanded to a brushed, Scotch Bright finish, I had Kiel’s Kustoms lay down a few coats of clear. Then we called up the infamous Brando to stripe and leaf the tank, seat hump and number plates, making them quite reminiscent of the original El Matador he also painted.” Adding the Rebel Yell logo and the number 10, he was pretty much done. “I won’t lie to you,” says Tony. “There was some skinned knuckles, hot heads and frayed tempers involved. It was tough. But you can’t complain when this is the result.” Other tweaks of note we managed to squeeze out of Tony include a set of K&N filters, a Joker Machine key relocator, some bespoke seat upholstery by Dave Purney, CRG mirrors, some Traxxion Dynamics forks adjusters, LSL rear sets, and some Hel brake lines. Then there’s the Michelin’s Pilot Power tires to keep things down-side down, and a Bates-style headlight with a custom-made headlight bracket lighting the way. Talking to him, it’s pretty easy to tell that Tony is damn pleased with how the Matador turned out. “It has been THE build I have done recently that I was really looking forward to riding, and it does not disappoint. The performance upgrades give it the power I was hoping for, and the suspension tweaks give it the handling I am always wanting.” Clearly he can’t wait to ride the thing cross country with his friends and a bunch of America’s best builders. Who could? And the best part about the whole thing is some lucky stranger will get to take this baby home when they give all the bikes away. We’re guessing there will be blood, sweat and tears then as well. Tears of joy, and some sweat from getting all hot and bothered. And the blood? Let’s hope it doesn’t extend past the responsibly raised blood alcohol level, due to the new owner’s post win celebrations.