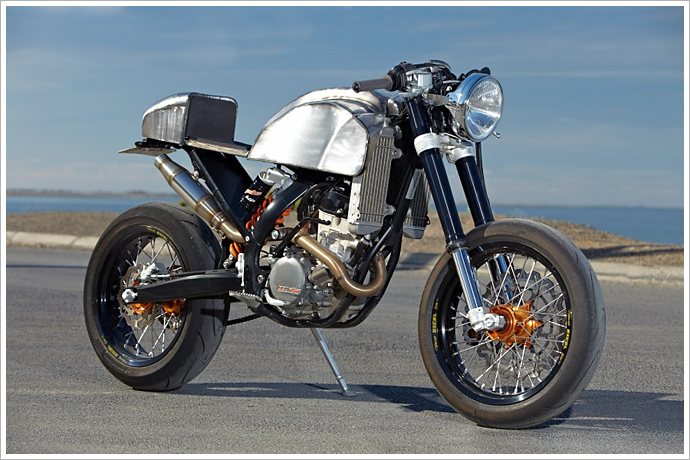 Here’s a story that has more twists and turns than a drift racer’s wet dream. You see, we first eyed this bike when it appeared on the front cover of the Australian Just Bikes Magazine all the way back in August of last year. We tried to get in touch with the owner via text message and email, but only managed to get a single reply before the trail went cold. We were was lost. Why wasn’t this guy getting back to us? Frustrated, we went to the owner’s website and began to read up on the bike’s builder – a guy called ‘Nigel’. Then the penny drops. ‘State drift car champion,’ the site says. And V8 Supercar demonstration driver. And TopGear Live demonstration driver, drift racing car builder, and custom bike builder. Phew. Ladies and gentlemen, please meet Nigel Petrie – builder of the world’s baddest KTM café, and quite possibly Australia’s busiest person. Here’s some more on the bike and the man, taken from his website. “I am Nigel Petrie and Engineered to Slide is a snapshot of my life. Born in 1983 I was exposed to all forms of motorsport and car culture. I appreciate everything automotive and have grown a deep respect for the work that goes into each and every component. It’s been the one constant in my life, the strongest desires to have what I wanted transpired into building something instead of buying it.

I’ve owned this 2008 KTM 250EXCF since new and always swapped it from Dirt to Supermoto whenever I felt the need. I wanted to try something different and the project KTM Café was born.” Rear cowl is removable and contains the battery

“The tank was the main challenge of the project. One thing I’ve learnt is anything can be made from metal, it’s just a matter of how much patience you have. After trawling the net and finding nothing that would suit the KTM frame, I decided to build one from scratch. Two days into it and I almost gave up. I try and rush everything and sometimes you just can’t – this tank required patience and persistence. To get me through, I started thinking about the final product and how much more fun my KTM will be to me; it’s a new bike for around $400 that’s already got rego and is practically ready to go.” A little bit of Austria, a whole lot of Australia

“With lowered suspension, clip on’s, headlight, sheet metal tank, seat and tail I have transformed my bike into a much more relaxed and fun bike to ride. I knew the transformation to Café styling would subdue the bike’s handling but I was surprised at how it hasn’t lost its Supermoto or Motocross roots, I can still ride the bike hard and feel comfortable with it moving beneath me.” “I have not been able to get off the bike since that first test ride. Being on a bike is freedom, but being on a bike you sculpted yourself is another thing altogether. It’s a sense of achievement; a mechanical symphony of parts working together because you arranged them that way.”