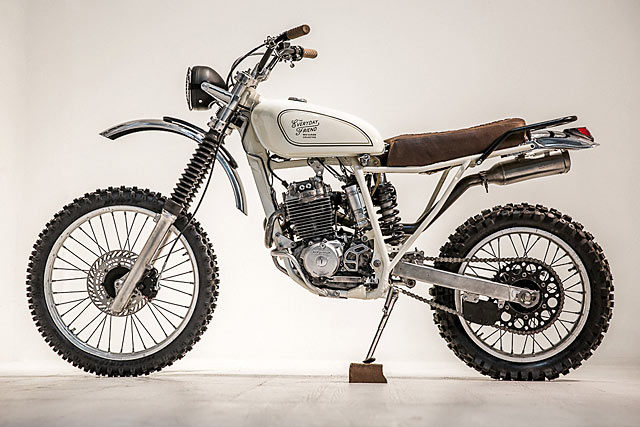 Red Clouds Collective is the very personification of everything that makes Portland, well, Portland. It’s a small workshop that produces bespoke leather goods like hats, tool rolls and aprons. And a glance through their social media feed features lots of desaturated black and white photos of bearded men in the woods staring into the middle distance. But they also turn their hands to the occasional custom bike. And they do a really neat job of it too, as this paired-back 1989 Honda enduro XR250 shows. The bike side of the Red Clouds Collective is organized by Seth Neefus, a man with a name so fitting of his business, I’m convinced he’s changed it to suit. ‘I’ve owned a few enduro bikes from the 70’s,’ he says. ‘And when I started doing more trail riding, I bought a more modern dirt bike.’ Leaping generations ahead in chassis construction and material design had Seth impressed. ‘The suspension, along with the light weight made it so much more fun to ride than those old enduros.’ But everything wasn’t exactly perfect. ‘The only problem was I loved the look of my 70’s XL350, but enjoyed the feeling of my new dirt bike’. [superquote]“It was in the condition you’d expect of a ride that’s been the flagship machine of Bubba Gump’s Crystal Methamphetamine Racing Team.”[/superquote]

Seth wanted the best of both worlds, so he went hunting for a motorcycle that sat in between the heavy, clunky old banger and a new, snarling, service-intervals-measured-in-seconds enduro. And he found it in a small town outside of Portland – a rough little air-cooled Honda XR250. The bike’s owner had hauled it away from a trailer park and managed to get it running. And it was in the condition you’d expect of a ride that’s been the flagship machine of Bubba Gump’s Crystal Methamphetamine Racing Team. ‘The seat had duct tape holding it together, the plastics were completely broken and zip tied on and the tank was secured by a bungee cord,’ Seth recalls. ‘Not to mention there was a handful of wires coming from below the tank which was wrapped around the handlebars. And the frame had about 3 layers of spray paint on it.’ But on the positive side the bike had clear title and, miracles of miracles, it started and stopped. Seth enjoyed the new little Honda, and he spent the next few months banging around the trails at Tillamook Forest on the Oregon coast. His summary of the bike makes it sound remarkably similar to my ex; ‘It was a blast to ride, but hell to look at’. And it started having problems. Niggles kept appearing and needing to be fixed, so the bike was denuded for a service. And underneath all that grime, all those cable ties and faded plastics was a bike with some promise. A simple frame and a nice upright stance. Rather than duct tape everything back together, the executive decision was taken to rebuild it properly – and make it into a sweet little throwback enduro. Any readers who have tackled someone else’s bucket of broken dreams and mechanical ineptitude knows what comes next. The rebuild was painful. ‘Every bolt was rusted on and oil leaked from everywhere,’ Seth says. So there was plenty of work to be done. The shock was rebuilt, and new gaskets were required all ‘round. The frame itself was trimmed back and stripped of all the superfluous tabs, technically known as ‘cable tie anchor points’. [superquote]“ The frame, which had more layers than an art house film, presented some problems.”[/superquote]

It was all helped along by three staples of the custom scene. ‘An angle grinder, liquid wrench and simple green became our best friends trying to clean up this rusty thing,’ Seth says. The frame, which had more layers than an art house film, presented some problems. At first they tried to take it back with a good stripper, but had limited success. Instead it all went off for sandblasting and powder coating. All the raw alloy was taken back with a wire wheel, steel wool and a Dremel along with a metric buttload of Mothers Aluminium Polish. Up top, an old Honda XL350 fuel tank was fitted, painted and cleared in Spray Max 2k. The trickiest and most time-consuming part of the build was the seat. Which is surprising, when given the speciality of the Red Clouds Collective. ‘We have been making custom seats for a long time,’ Seth explains, ‘but this one was especially tough because the tank is asymmetrical, and we also wanted to incorporate a leather weave technique we’ve been playing with.’

I haven’t seen a woven leather motorcycle seat before, and I think Seth knows why. ‘It took way longer than expected to make and if we messed up sewing it together we would have had to start all over. It was such a relief to finish it and see how good it looked on the bike.’ And it looks absolutely terrific. The seat tops off a build that is exceptionally clean but with just the right amount of patina left over. The whole bike looks immeasurably better than it did originally and, best of all, it hasn’t lost any of the dirt manners it was built with. Take a good look at the Honda now because it won’t stay this clean for long – Seth is planning on tearing up more trails in the forests of Oregon. The next time you see it, it’ll be a lot muddier. And probably photographed in black and white, with a bearded dude sitting atop of it, staring into the middle distance.