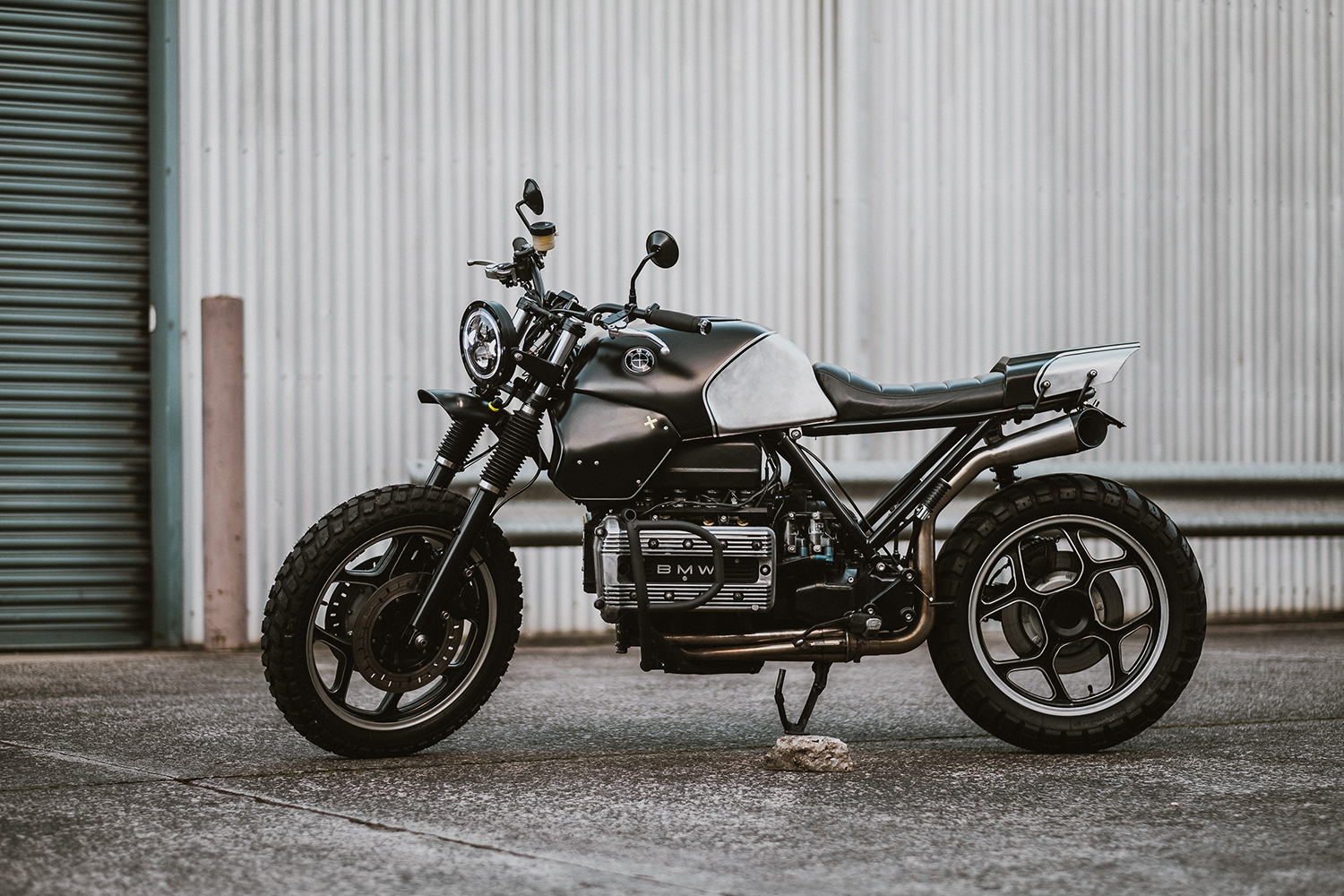 When your inspiration for a build is a dear family member and your end goal is to create your ‘forever bike’, those who you bring in to work on your custom creation become fundamental. For Sam Fossati that was all made possible by being a part of Australia’s original DIY workshop Kustom Kommune, a space filled with talented bikers; a community, a home. Having become obsessed with the scrambler style he had to find the right donor and standing at 6ft8in the BMW K100 made perfect sense. With the Kommune Krew behind him, they’ve carved out a bavarian beast to pay tribute to an Italian iconoclast, Sam’s beloved Nonno.

“My Nonno had a very extraordinary life. He was a hunter, adventurer, CEO of Hella Lights in Italy and was chased by the Red Army and the Italian Mafia to the Swiss Border. In Italy he was known as ‘Fossatone’, which translates to ‘Big Fossati’. An absolute badass!” Sam recalls fondly. “The K100 was built to become my ‘forever bike’, and to be 100% dedicated to him, his life, and our Italian heritage. Everything on this bike is a nod towards him, so much so that his nickname and the name of the bike is embroidered into the side of the seat next to the Italian Flag.”

Leading the build would be Kustom Kommune founder Jimmy Goode, “Sam came to us wanting to build a refined Mad-Max style Scrambler dedicated to his Nonno. We were really excited to take on the project and help Sam build his dream bike, and this build had many contributions from skilled folk in the Kommune community.” To set the tone for the build the stock wheels are retained, given a tidy up and then fitted with some chunky Heidenau K60 rubber. While to improve the ride and work with Sam’s height, the stock forks are rebuilt with progressive springs and a 1 1/2in over YSS adjustable shock fitted to the rear.

From here the overall desired look, “a heavy, low and bulky front end and in contrast to a tall, narrow and open rear” could begin to take shape. And it all begins with the subframe that replaces the stock item, recreated in factory sized tubing. Underneath the first of two pans holds some remaining electrical items and the big ECU, while the seat pan itself is hollowed out in parts to allow the ECU to fit. The seat unit itself was taken care of by Savvas Automotive Upholstery, who took a piece of beautiful leather gifted to Sam by a high-end Italian company and shaped the exquisite saddle.

Over the back of the seat, Sam wanted a removable rear cowl, but try as they might the team couldn’t find one that did the job. So to better match the tank, aluminium was chosen over fibreglass and Jimmy along with Luke Steiger went about designing what they were after, making it out of cardboard and then completing the final product. All of which can easily be removed, like the seat itself, with a 5mm hex key. Matching the lines the tank mounts were moved to allow the hefty item to sit lower on the frame and a set of tank panels from Unit Garage adds to the beef!

A set of crash bars that Jimmy sourced build on the utilitarian feel and provide the perfect place to mount a Hella Comet 500 light as a tip of the cap to Fossatone’s time as the company’s CEO. “A high mount fender pulled from the Kommune donated parts box was attached to the bottom triple and a Purpose Built 7” headlight was installed along with Motogadget Bar End indicators and PBM 3in1 Taillight and Indicators,” Jimmy explains. With the addition of RFID tag, Motoscope mini, and other electrical components, the job of integrating it all into the nightmare BMW loom was taken care of by Kommune member and ex-BMW tech Dario Riveras with an m-Unit at the heart of it all.

“The mechanical side of things were taken care of by Michael Scheller, a German motorcyclist riding his R100 around the world.” Stuck in Melbourne because of the Covid-19 pandemic, he’s been a godsend and had the big K running like a dream with a decent overhaul. The exhaust was always going to be the most substantial of the engine modifications and all agreed it should run tight to the frame. This would, however, interfere with the clutch actuator, so a new one was built by engineer Cam MacFarlane another member of the community, while Luke fabricated the killer sounding system.

The matte black paint and raw metal make for the perfect colour palette for the build; while a number of untouched parts are simply cleaned rather than repainted. For Jimmy, it leaves a piece of “the bike’s history and the freshly painted and polished parts that have been modified create a beautiful contrast between the vehicle’s old life and new.” The finishing touch is a hand-painted signature below the fuel cap, that of Sam’s Nonno. Men like him were cut from a different cloth, larger than life characters who saw the worst of what the world could be and yet lived with an adventurous and loving spirit. So it’s fitting that in a time of global suffering, a close-knit community came together and forged through friendship built a tribute that lives up to the ‘Big Fossati’ name!