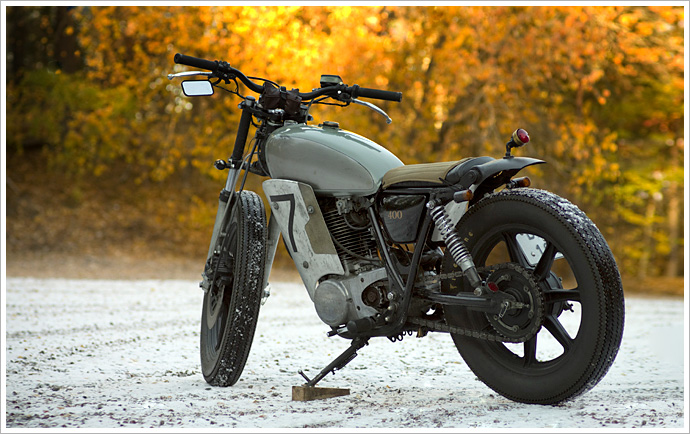 Isn’t it weird how one little addition to an object can have seemingly untold benefits to it’s aesthetics. Take, for instance, your common, garden-variety Martini. Now you could argue that a Martini is simply a slug of gin (or vodka, if you’re having childish delusions about being a spy) and some vermouth. But I’d argue that what in fact makes the Martini is the garnish. Without that twist of lemon, olive, or whatever new-fangled hoopla they are currently adding to the glass, I’m betting that it would have disappeared without a trace into the ocean of nondescript cocktail wannabes a long time ago. The message you’ll need to take from this, my little pickled pipers? One single inspired touch can make a good bike great. And in the case of Farmer’s Racer, there’s no free drinks for guessing just what twist we are talking about. Här är Lars. “My name is Lars Gustavsson – educated farmer with a bachelor in design. It all started in the beginning of 20th century, when motorcycles were more common than cars in the Swedish countryside. Many farmhands had a 98cc Husqvarna or Monark standing in the shade of the daytime ride, the tractor. Most of the evenings were spent racing between road crossings through the spruce forests. Part time racer, part time haymaker. This is what I still do – only now it is urban farming, using the esthetics of motorcycle racing to bring more go into potato growing.” “My motorcycle history does not date back more than 3-4 years. At 37 years of age I started to surf the internet to find esthetics and trends to support my urban farming ideas. What I found was Pipeburn, Bubblevisor and the Japanese scene of garage built custom motorcycles. I was stunned. The idea of using second hand parts and any suitable metal at arms length really reminded me of how farmers would solve their mechanical problems. Adding, changing, repairing and taking care of, until the machine carries a story longer than an average novel. This is not picking parts in a catalog. This is – do it your self, or take the tractor to the race. I wanted to test this design philosophy.” “Two years ago I bought an Yamaha sr400 model 1984. After a full winter of cutting away parts the first version of the bike was ready. A traditional cafe racer – looking as many sr400 do: Firestone 4.00 front and 4.5 back. A new electrical system, leaving a nice hole for the K&N air filter under the seat. Bates front light and clip on handle bars. Custom made seat and a new rear frame and lighting. It locked nice, but it did not unveil the farmer’s orgin. During the last year, until now, I have started to change the design, from cafe racer to – farmer’s racer.” “Cutting away was the trend, so it felt odd to add cowls and covers. But all the empty places needed some additional details. The big Firestones and the aluminum rims were starting and ending the design with power and weight. In between was a small engine and a hole under the seat. The original battery covers were the first to be mounted back into the frame. With clean frame tubes and only a K&N filter inside I was free to place the panels with a little finesse. They are now riding two inches further in, under the seat, than the original covers – showing the frame, not adding to the width of the bike.” Lars ponders which clogs he will wear tomorrow

“The panels are adding to the story of the bike.
Purely esthetics and story telling”

“The large side panels is not there to hide the engine. I like the motor of the sr, and an old design trick is to cover things that you really want to show. People will look behind. And they do. I’m spending a lot of time helping old men up from their knees in parking lots, as they are trying to figure out the idea. The panels are adding to the story of the bike. Purely esthetics and story telling. They are mounted on pins, zig zaging their way from the top, and front, engine mounts. The fixture is completed with custom nuts with wire locks, all made from washers and standard nuts welded together as an old quick mount. As the engine is 30 years old I need regular access to the spark plug. This design took most of the second winter (2011).

One freezing morning in October all was done. A new LSL handle bar and a complete rebuild of the rear frame, now holding just a tiny part of the original fender, made the story complete. This is a farmer’s racer.”