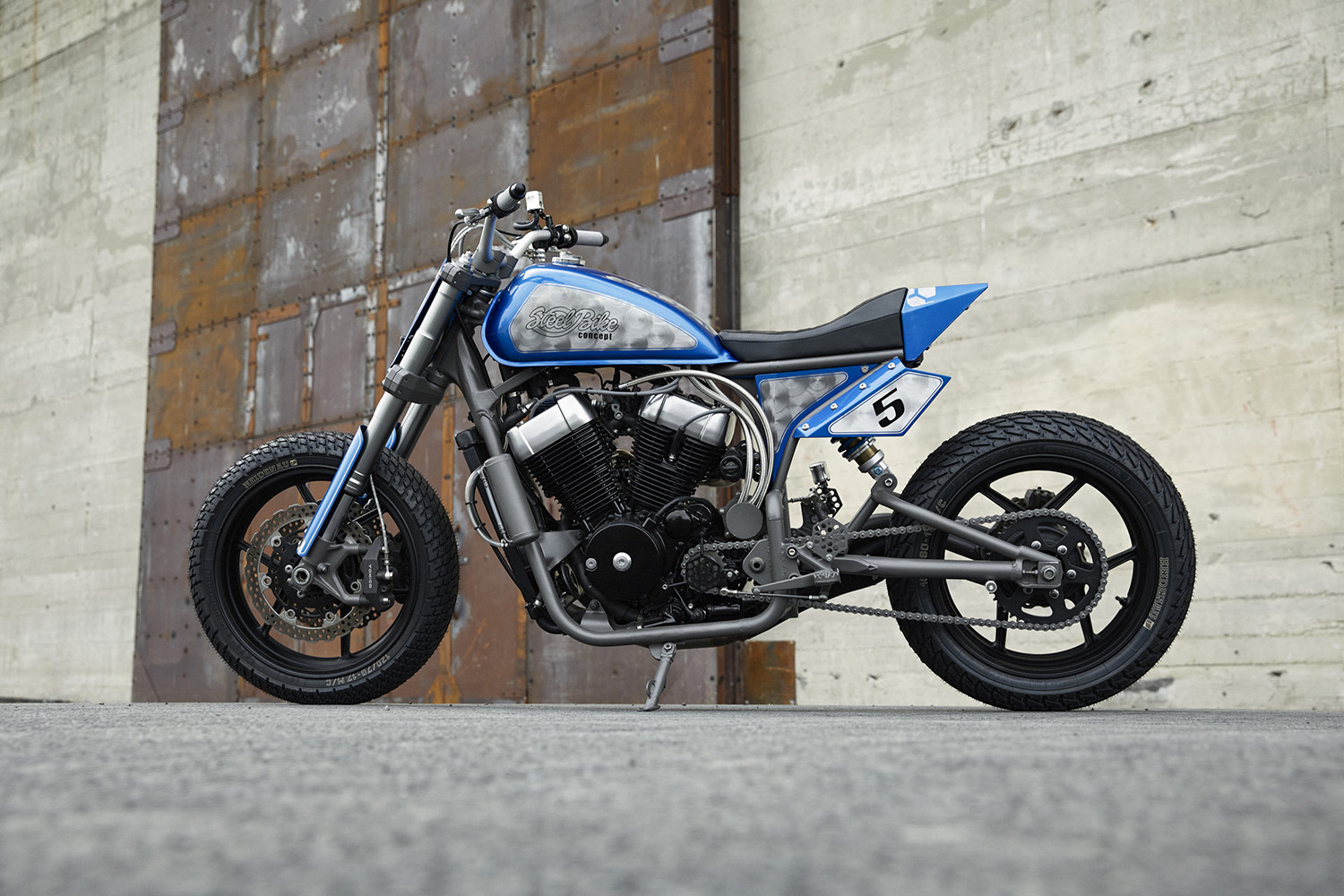 There’s a vast spectrum of motorcycle customization, from stock bikes with a few aftermarket bolt-on bits to entirely bespoke creations where pretty much everything save for the powertrain and running gear has been custom-built from the ground up. And though projects at the latter end of this spectrum are markedly more costly and time-consuming, they have the ability to yield far more transformative results, profoundly altering a bike’s aesthetics, performance, and overall character. French customs shop, Steel Bike Concept is one such outfit that prides itself on routinely taking the all-custom route, turning run-of-the-mill motorbikes into almost unrecognizable, extensively modified, one-off works.

Based in Bordeaux, SBC is comprised of a small team of mechanics, metal workers, and all-around craftsman that have spent the last six years together, honing their skills and developing a distinctive style of build that doesn’t shy away from doing some serious heavy lifting. Likewise, the guys aren’t afraid to work with modern bikes and their myriad of sensors, countless yard of wiring, and other unsightly ancillary elements that hugely complicate one-off projects. Enticed by the larger scale and complexity of the project, in 2019 the shop also began dabbling in modifying cars, though two-wheeled transformations remain SBC’s bread and butter.

“The more technically complex the projects, the more we’re interested. So, while changing the appearance of a bike is an important part of our formula, we consider bolstering the performance capabilities of the machine to be equally, if not even more vital to our builds. I often explain this by saying ‘We prepare what is seen, and we especially prepare what isn’t,” the shop tells us.

Steel Bike Concept’s latest build started life as a 2010 Honda VT750 S that entered the shop in solid condition — at least mechanically, though that’s all that would really matter considering just about everything else (with the exception of the tank) was destined for the skip out back. Even with half a race catalog’s worth of parts and some serious massaging, the Shadow donor just isn’t that sporty or aggressive of a ride, with a low-slung and leaned-back stance with a 26.6” seat height. So the team set about making some fundamental alterations to the frame and its accompanying componentry.

Once the Japanese V-twin was pulled from the bike, the shop proceeded to start hacking up the chassis, removing integral parts of the structure, and building it back up with their own in-house design and geometry. “On this build, the only original parts of the stock chassis are the stem and some of the front section. Everything else we’ve completely rebuilt,” relays the SBC crew.

In addition to a one-off subframe, the new framework around the 745cc engine is now paired with a fully-custom-made swing-arm with a tubular construction that matches the main chassis. “The swingarm was developed and custom fabricated to accommodate a specific shock absorber by EMC Suspensions — our go-to supplier for shocks — and sees all the wiring and cables for the speedometer and rear brake internally routed through the new swing-arm,” explains the French outfit.

At the opposite end of the quarter-tonne cruiser, SBC has jettisoned the stock front-end in favor of the inverted forks off of a Ninja ZX-6R, which are now slotted in a modified set of triple trees plucked from a late-model Z1000. Stopping duties are now handled by a pair of four-pot Tokico calipers from a GSX-R1000 that now chomp down on a set of oversized petal rotors. Rounding out the rolling chassis is a pair of forged alloy wheels borrowed from a Ninja 650 (or ER6N) donor that have been wrapped in Heidenau dirt track rubber.

Next up would be tackling the Honda’s electrical system. “The motorcycle’s entire harness has been re-wired with full Motogadget management and hardware and now connects to its owner’s smartphone via a Bluetooth-enabled app,” says SBC.

The rest of the electrical bits are just as top-shelf, with Motogadget also supplying the build’s instrumentation in the form of a Motoscope Pro display, as well as the Shadow’s switchgear, while Kellerman was responsible for its LED bar-end indicators out front and its micro-pin LEDs tucked into the tail in back. The fully-redone cockpit also gains a set of swept-back tracker bars, new grips, CNC-machined reservoirs, and steel-braided lines throughout.

“The new equipment not only improves cornering and performance but also results in a substantially more aggressive stance and riding position that encourage spirited riding and just generally having fun on the bike,”

Now sporting blacked-out covers with a polished top, the 52° V-twin’s stock power output has been upped through the use of a competition-style air cleaner kit with a K&N pod filter and a custom exhaust system finished off with an underslung HP Corse muffler nestled perfectly beneath the contours of the new swing-arm.

When it came time to handle the Shadow’s bodywork, the team had already landed on a traditional street tracker theme with a few unique touches. With a fairly standard cruiser tank, the Honda’s stock fuel cell actually lent itself quite well to the dirt oval racer aesthetic, so it was decided that it would remain in play on the finished build. Capping off the aft end of the bike is a boxy yet waspish tracker tail section made up of six panels of sheet metal that have been fused together before a custom nubuck and leather seat was dropped in place between the tank and tail.

“The tank is the only original piece that we’ve preserved and everything else has been handmade from a combination of steel and aluminum. We wanted to highlight the use of the genuine metal constructions (another one of the shop’s dearly-held hallmarks) which is why we opted for the circular-brushed look,” the Bordeaux builders relay.

Beneath the subframe there’s an under-tail cover and inner rear-fender combo piece sporting a circular cutout in order to fit the EMC mono-shock and a pair of custom side covers concealing the project’s battery box and electronics tray. Guiding the way is an LED bar headlight partially recessed in a front number plate that’s slightly flared up at the top in order to squeeze in the Motogadget display. Hanging off the sides of the seat are bent metal number boards that, along with a pair of fork guards, complete the full suite of tracker bodywork.

Hexagonal patterns are another theme present on the build, with series of the six-sided shape present in the bike’s paint job on the tank, front number plate, fork guards, and tail, as well as on its saddle’s accent stitching. What’s more, SBC also added hexagonal-shaped heel guards and a front sprocket cover each with 19 hexagonal cutouts — a subtle, though nonetheless thoroughly rad touch. Finishing odds and ends before final paint could be applied include the addition of a stubby, custom kick-stand, toothed foot-pegs, swing-arm spools, and a custom oil catch can.

Large portions of the steel and aluminum on the tank, side number boards, and side covers have been left bare while the rest of the surfaces were coated in an almost candy blue paint with pin-stripes outlining the bare, circular-brushed metal sections that have been left on display. The build’s frame and swing-arm, as well as its risers, catch can, foot-controls, and heel guards have all been powder-coated in a deep gunmetal gray. Bare steel braided lines and gray-anodized fork uppers neatly blend into the rest of the exposed brushed metal and gunmetal gray framework. Lastly, shop logos on the tank complete the transformation.

“The parts of the build we didn’t do ourselves, were performed by a hand-picked selection of subcontractors, including Kolor Bikes for the paint and David Follain for the excellent upholstery,” says SBC.

Unsurprisingly, Steel Bike Concept’s work on the Honda has given way to a much more visually attractive bike than the decade-old cruiser, and in the process has evolved from a low and slow sled to a hooligan-ready street tracker — ticking off the shop’s primary objectives of completely restyling its appearance and cranking up performance. And, on top of a rider that’s now particularly satisfied with their commission from SBC, the larger customs community has also taken a liking to the project.

“The motorcycle was presented at the Lyon show in March 2020 and had been selected to be exhibited at the Bike Shed 2020 show, which was unfortunately canceled…for obvious reasons. Since then, however, it’s made its owner very happy.”